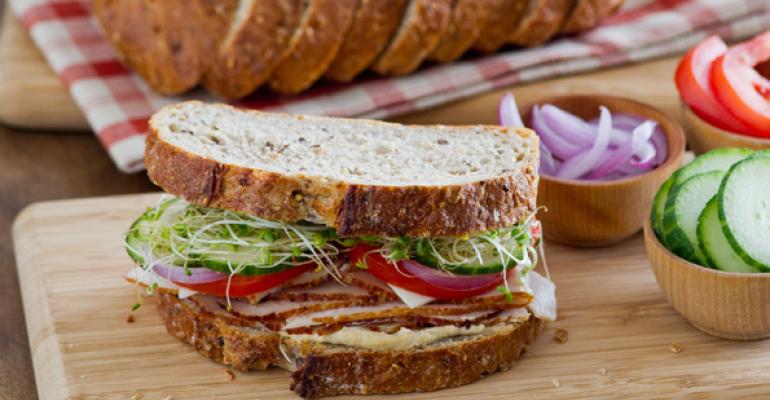 Want to tap into the timeless appeal of great flavors that are great for you? Mediterranean items on the menu, like hummus that’s packed with nutrients, or naturally lean lamb kabobs with a zesty yogurt sauce, are feel-good eats.

Mediterranean cuisine's current popularity and timeless appeal lie in its ability to be both a healthy choice and a flavorful one.

A recent report by Technomic anointed the Mediterranean way of eating as “hardly a passing trend but rather an up-and-coming cuisine with staying power.”

This  is clearly something both the chef and the dietitian can embrace with confidence. While the chef is smitten with the flavors of lemon, mint and olive oil, the dietitian can enthuse over the ‘good fats’ in the olive oil and the plant-based key components of the diet.

Such collaborations work well, Pigozzi and Hernandez agree, as they invite reduced salt and fat and the elevation of flavor through fresh herbs from the garden instead.

“A lot of research shows that it’s a healthier lifestyle that helps reduce the risk of heart disease,” Hernandez says. “We want to focus more on a lifestyle, rather than a ‘diet.’ That’s where our focus is right now. A lot of the main ingredients are better for you than an excessive amount of meat—lentils, legumes, whole grains, and of course fresh fruits and vegetables.”

The two recently worked together to combine the refreshing flavors of the Mediterranean with a staple among the health conscious/vegetarian set: the veggie burger.

The flavors of fresh thyme, garlic, chickpeas and raisins make the burgers uniquely Mediterranean. A house-made ketchup, spiked with aged balsamic, garlic, brown sugar and oregano dresses the veggie burger, which is then strewn with lemon-and-olive oil-kissed arugula, on top of ciabatta.

This burger is “high in fiber, rich in nutrients, low in salt, but flavorful from the herbs and (nonfat) ketchup,” Pigozzi says.

According to the Technomic report, 27 percent of diners say they regularly order hummus as a go-to healthy appetizer. Also, Technomic found a spike in total items menued with pita sandwiches.

The olive oil that helps give hummus a smooth texture and earthy flavor gets high marks in terms of healthful perception when it’s used as an ingredient in either hummus, tabbouleh or baba ghanoush, according to the report.

Other prominent foods in the diet—fish, herbs, simply grilled or raw vegetables—are ingredients that the majority of consumers consider to be healthy, according to the report.

A recent remodel of a University of Wisconsin-Madison dining facility allowed the opportunity for a new concept that will feature the cuisines of North Africa, the Middle East and the Eastern Mediterranean.

The cuisine will be featured in other units across campus, “but we’re looking forward to carving out a unique identity for the permanent station when remodeling is done,” says Jeffery Orr, CEC, executive chef, dining and culinary services, who got to know Mediterranean food very well while living in Brooklyn, NY, and eating in the restaurants there.

“In particular, I loved this restaurant called Moustache,” he recalls. “I’d like to recreate one of the dishes they served there, Lahm Ba’ajeen, which is a spicy lamb pizza with sumac and garlic.” Orr thinks the stations new hearth oven will work perfectly for this.

“It has become one of the highest performers on our menu,” says Mike Sabo, director of hospitality services, Southern Maine Medical Center, Biddeford, ME. The salad begins with toasting a warm and wonderful spice blend of cinnamon, turmeric and cumin (“Toasting it makes it more aromatic,” Sabo says).

A boneless, skinless chicken breast gets seasoned with those spices, tossed with a little olive oil, then marinated overnight. It becomes a fresh, healthy lunchtime star the next day: The chicken is grilled, cooled and sliced on the bias, ready for the plate that’s been lined with baby spinach, two scoops of hummus and two scoops of housemade wheatberry tabbouleh. It's dressed lightly with a zesty yogurt and honey dressing and garnished with tomatoes, kalamata olives, chopped scallions and pita wedges.

All that on a plate, and it’s a skinny 580 calories and 20 grams of fat, information that’s readily available to customers on “Spotlight on Nutrition” signage. This salad gets a green dot, indicating “best choice,” and at $4.25, it’s a great choice for the budget-conscious as well.

Blueberry Couscous Salad with Mango, Onion and Lemon Dressing
May 03, 2012