Chartwells’ Tu Taco concept at Texas State University (TXST) was introduced to replace an Au Bon Pain with a concept offering authentic Latin flavors and plant-based alternatives. With more than a 30% increase in guest transactions, Tu Taco is working well.

“So much of our campus knows authentic Latin flavors, so we had to ensure we execute each recipe perfectly,” says TXST Chef Michael Giese. The al pastor taco, shown, is the highest-selling entrée at Tu Taco.

“Our vegan and vegetarian students want the same offerings as other students, so we as culinary experts need to focus on how we can adjust our already delicious recipes slightly,” says Jonathan Sorenson, retail director at TXST. Using vegan cheese and Beyond Meat, the Beyond picadillo taco was born, and it’s been growing in popularity, “not just by the vegan and vegetarian students,” Sorenson says.

Proving that tacos are welcome on any day of the week, Bryant University’s Sodexo foodservice team offers a buffet of ingredients, and students let their imaginations run wild on Thursdays. “It’s always interesting to see how the students get very creative with what they think up,” says Kristen Jackson, marketing pro at Bryant.

Bryant students take from the buffet and create beefy tacos (pictured) and also have free rein to create their own taco salads, crunchy tacos, plant-forward tacos or even add short ribs from the nearby Lemon Grass Kitchen concept.

At another of Elon’s campus restaurants, Lakeside Hall, corn tortillas are made fresh to-order and topped with shredded chicken and a variety of toppings including fresh cilantro, limes, sliced radishes and housemade salsa verde.

Tacos fly at Air Force Base

The Wingman Café by Sodexo is a concept at the Randolph Air Force Base in San Antonio. Being in South Texas, “you can get a respectable taco any day of the week on any street corner, yet almost 20% of the guests that dine with us order tacos from our café,” says Executive Chef Benjamin Rogers.

At Randolph Air Force Base, the most popular taco is carne asada, closely followed by meatless Tex-Mex tacos (shown), which include roasted veggies.

Pulled pork is heavenly in tacos, as shown here at Texas Christian University, where the carnitas are topped with mango salsa, avocado, pickled onion, cilantro and Daiya cheese. The tortillas are made with cassava flour.

At Liberty University, Sodexo designed Sabroso, an original concept for Liberty’s concessions. Soft- and hard-shell tacos are available, and even taco flights, for those who just can’t choose. Pictured here is the Cape Town taco, with shredded chicken, black bean-corn salsa, piri piri sauce, lettuce and cheese on a flour tortilla. 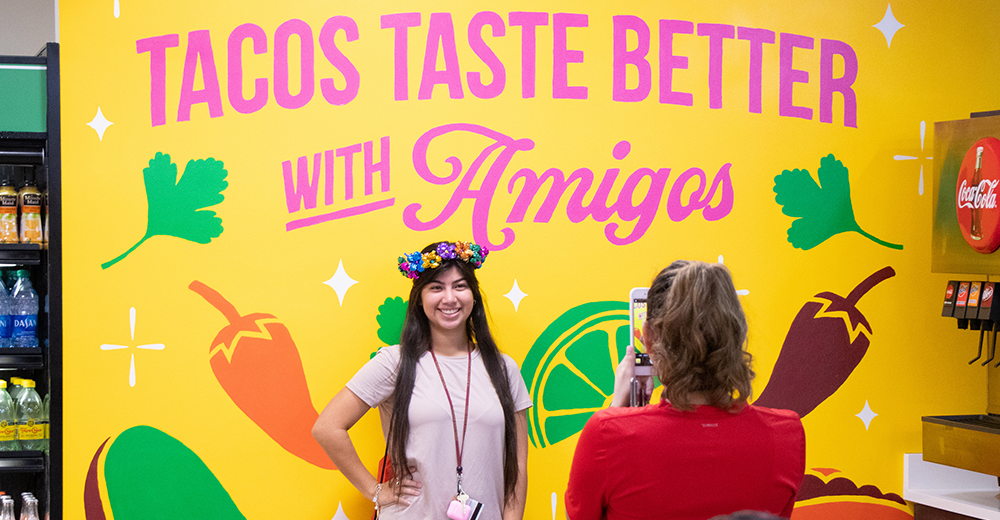