At the University of Alabama, the campus bakeshop turns out a series of logoed cookies and cupcakes to celebrate the Crimson Tide’s multiple national championship-winning football team.

Served every game day, this OSU favorite is a chocolate peanut butter stack of pancakes served with mixed fruit topping and whipped cream. Syrup is optional.

Executive Pastry Chef Heather Luse and The Penn State Bakery created this GameDay Cake for the WhiteOut game on Oct. 19th against the University of Michigan, featuring not just the school logo but three layers of field, footballs and pawprints to capture the campus football frenzy (Note: Penn State won the WhiteOut game).

Hot off the panini press, sliced sourdough bread is filled with seared and grilled grass-fed Harris Ranch brand beef and blue cheese made in northern California, then served with UC-Berkeley’s signature twist on pasta salad—cheese tortellini tossed in a pesto sauce made with organic basil and California olive oil.

A pound of jumbo chicken wings is roasted and flash fried to the perfect crispiness, then tossed in a housemade Buffalo sauce and topped with a lemon pepper seasoning.

In Eastern North Carolina, traditions like football, tailgates and BBQ go hand in hand, and in ECU Pirate Nation they celebrate this by featuring the university’s own BBQ pork shoulder, which is smoked, pulled and served with the traditional Eastern North Carolina sauce of cider vinegar and red pepper flakes and the indispensable side of housemade cornbread to complement it. To satisfy any sweet tooth, there is the all-around fan favorite Purple and Gold, White Chocolate Bark (at bottom right).

The new menu item this year at Boston College’s campus stadium was the Screamin’ Eagle Steak n Cheese, a student favorite that alums always ask for it when they visit campus. The Screamin’ Eagle has been featured twice in the New York Times food section.

Another Boston College favorite is a lobster roll that is featured in the stadium’s visitor section (since it is always nice to have lobster when you visit Boston).

These iced sugar cookies feature the pawprint of OU’s mascot and are served at every home game.

These Rooster Eggs (supposedly a “super rooster” named Pistol Redd lays them to give NMSU Aggies “the strength they need to wobble on”) are deep-fried gluten-free fritters filled with juicy Buffalo chicken and drizzled with Sweet Fiery 1888 Wing Sauce and green chili ranch.

The FYUL station in the Oaks Dining Hall at Bowling Green was developed by Chartwells to offer nutrition especially helpful to athletic activities. Pictured is a zucchini and chickpea burger served with roasted sweet potato wedges, baby arugula, sliced tomatoes and red onions and miso Thai chili mayo on a whole wheat bun. 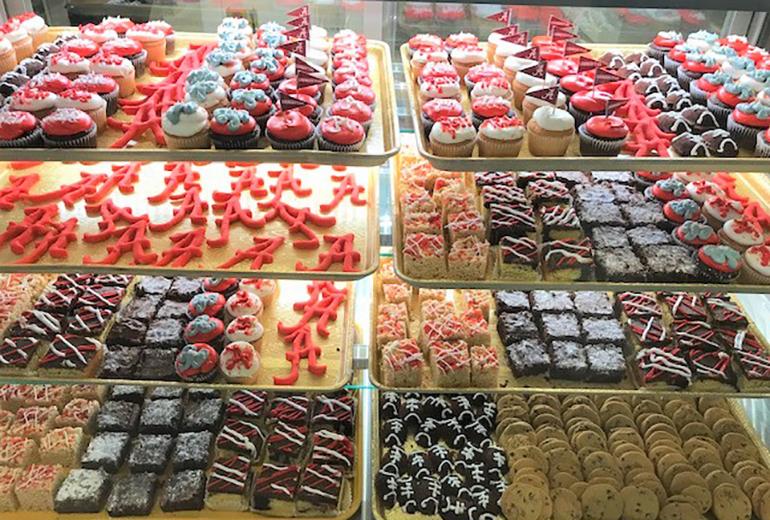