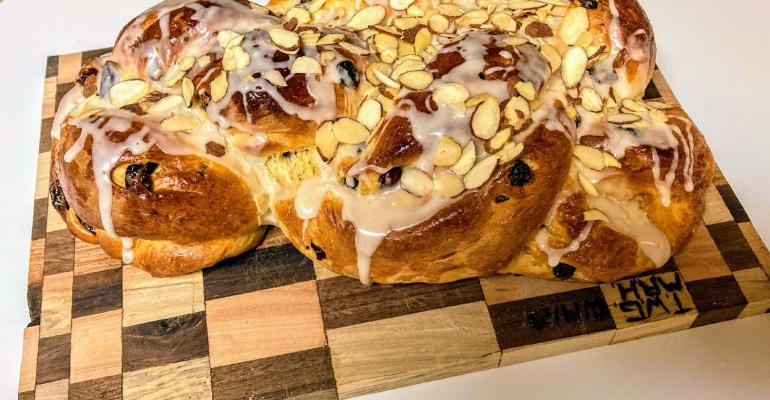 “The flavor of Norwegian Christmas cake is vaguely similar to fruitcake,” he says, “but much more mild. I use just enough orange and cardamom to get a hint of each and let the brioche-style bread and dried fruit be the stars of the show,” says Aramark Chef David Thornton at Bentonville Public Schools.
Food & Beverage

Celebrating the time of year when seasons overlap and pumpkins don Santa caps, chefs are coming up with sweet desserts that cross that seasonal bridge deliciously, from pumpkin rolls to yule logs to croquembouche, sugar plum cakes and more.

‘Tis the season—already! But be sure to slow down and embrace the last of autumn’s harvest by featuring both fall and winter vibes on one dessert menu. Picture fall leaf cookies next to candy canes. November is the month for easing into holiday fun. And helping your customers get in the spirit doesn’t have to be complicated, though no one’s stopping you from reaching for the stars with a croquembouche or yule log...

At the University of North Carolina-Chapel Hill, Executive Pastry Chef Carolina Hock sums it up nicely: “Holiday desserts can be magical without the fuss,” she says. “Everyone can use their creativity to make these desserts their own.”

Related: 21 chili dishes to fire up the menu 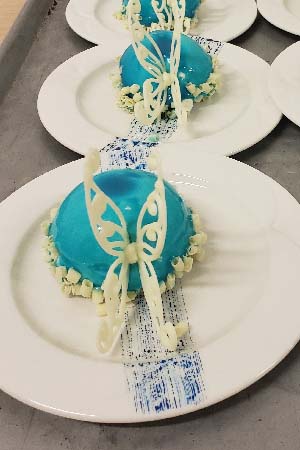 American Dining Creations’ Corporate Chef-West Jonathan Pye has merged the seasons in some very fun ways. His Thanksgiving/fall desserts include blood orange crème brulee, pumpkin pie in a glass and chocolate spice torte. A break-your-own chocolate bark adds some hands-on fun for special occasions. And he gets ready for Santa with adorable “milk(shake) and cookies,” a grab-and-go treat that evokes Christmas Eve excitement. “And just because I’m from England,” Pye says, “I make traditional mince pies. We leave those out for Santa over the pond.” [Editor’s note: Stay tuned for our savory holiday brunch feature next month!]

“When we all finished eating and I was cleaning the kitchen [editor’s note: Good man!], I realized there were so many unused croissants and pastries left over,” Hoffenberg says. “One thing I hate is for food to go to waste, so I thought, what a treat…”

He tore up all the pastries, soaked them in milk, egg, vanilla bean and brandy, then added chocolate and sugar, baked it and whipped up brandy cream to go on top. “It’s a decadent dessert full of flavor, color and amazing texture that brings back that feeling of family comfort and togetherness.”

A sweet take on panzanella (leftover bread salad) is Sodexo Chef David Morales’ holiday hack. Morales, senior area chef for the Northeast and contributing chef for Inside Park at St. Barts in New York City, incorporates poached pears into bread pudding, then tops it off with chocolate shavings and plates with some squeeze-bottle flair.

Another beguiling bread dessert: Norwegian Christmas cake, or Julekake, a yeast bread similar to brioche, flavored with caradamom, orange zest and dried fruit, dressed up with a glaze and slivered almonds by Aramark Chef David Thornton at Bentonville Public Schools. 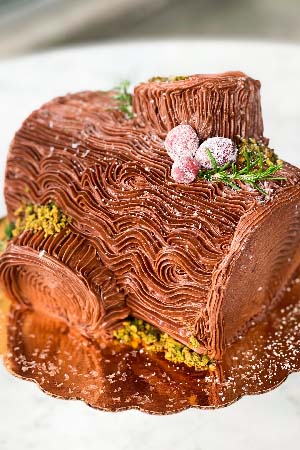 The Yule log—rolled cake with frosting scraped up to look like bark—is a retro-fabulous holiday sweet that deserves the tallest cake stand. At Duke University’s Café in the Brodhead Center, a location operated by local bakers, Chef Lee Whitsel does some amazing handiwork and creates a yule log straight out of Santa’s workshop with pistachio “moss,” “mushroom caps” and a sprig of rosemary. Café is also offering grab-and-go-able desserts like pecan pie bars, pumpkin cheesecake bars. Either way, “each bite feels like a piece of home,” Whitsel says.

That’s how we (pumpkin) roll

The yule log’s down-home, cream-cheesy cousin, the pumpkin roll, is another great way to roll into the season. At Rollins College in Winter Park, Fla., Sodexo Pastry Chef Naomi Cotto’s spiced pumpkin roll is sliced to reveal the cream cheese frosting and decked out with fall colors for a sophisticated plate.

Another cool pumpkin roll is made for catering at Goose Creek CISD by Aramark Chef Manager Franchesca Bland “You can’t go wrong when you combine cream cheese and pumpkin,” she says, calling the pumpkin roll “easy to make but hard to walk away from. The sweet combination of pumpkin and cream cheese will have you ready to deck the halls!”

At UNC Wilmington, pumpkin roll is a signature dish for Aramark Baker Peggy Powell, who has been baking there for 20 years. She’s made lots of different rolls over the years and along the way learned to make a gluten-free version of pumpkin roll. Either way, “it’s a taste of fall and a flavor that brings a memory of home for many students,” Powell says. 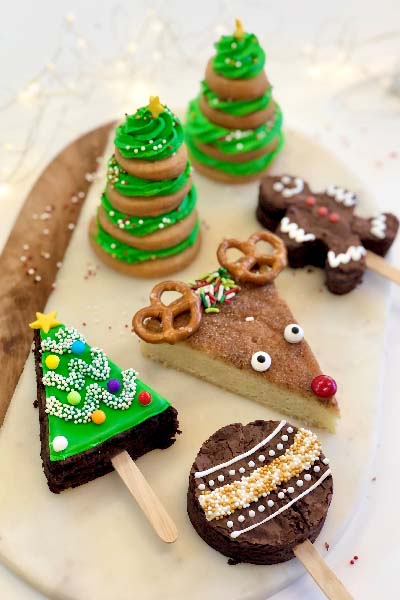 Desserts that honor the big guy are a surefire way to smiles and photo ops for your customers. Aramark Executive Chef Alicia Rivera at Lewisville ISD makes a five-spice sweet potato cake for catering that’s a fall-into-winter masterpiece, splashed with pumpkin seeds and topped with berry-wine poached pears that give the look of jolly old Santa’s cap.

Also at Lewisville ISD, the team makes the most of the very last of peach season with an upside-down peach-cranberry cobbler with a bourbon sauce, also for catering.

Since the 1800s, croquembouche has been known as a slightly…complicated…and over-the-top kind of dessert, originating in super-fancy Parisian banquets. It’s puff balls of pastry attached to a cone form with an intricate lacework of sugar. The embellishments are then up to the chef.

If you’d fancy giving this a go, take a cue from Morrison Healthcare Senior Executive Chef Josh Nowell of Atrium Health Navient Macon and give it a pumpkin twist for fall-into-winter. Nowell and his wife are both trained pastry chefs with a strong background in classical French techniques. Christmas is a time when they really strut their stuff, he says.

“We like to try new things each year around the holidays. We found this croquembouche recipe last year, and my kids and family were thrilled by it,” he says. “It’s a small croquembouche filled with pumpkin cream and each one is dipped in green-colored white chocolate.” Sprinkles and icing complete the new classic.

And Carolina Hock of UNC-Chapel Hill totally brings on the season with so many Santa-worthy treats: sugar cookie-buttercream Christmas trees with fondant stars and sprinkles; snickerdoodle blondie reindeer topped with cinnamon, sugar, pretzels and candy; and holiday brownie pops with royal icing and sprinkles.