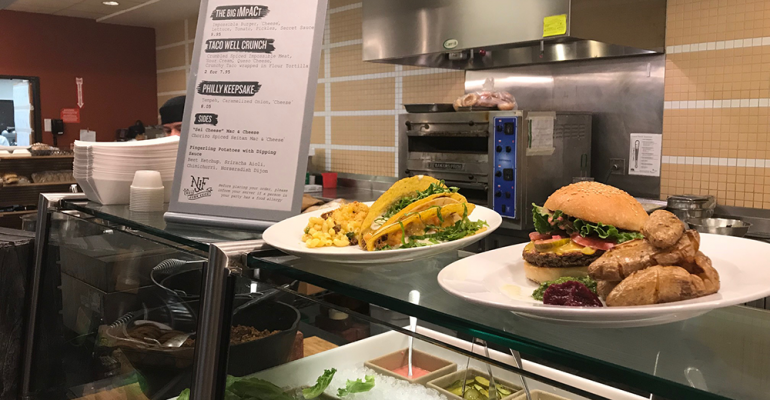 How do you encourage more plant-based dining without turning off traditionally minded customers with a loaded word like “vegan?” The Not Junk Food does it with meatless dishes that look like traditional meaty favorites.

The number of people starting to ditch meat and animal products—or at least cut down on them—has exploded in the past five years as society becomes more educated about humane practices in the food industry and the impact of factory farming on global warming.

The millennial generation in particular has already established a record of being more plant-based in their diets and Gen Z is already purchasing more meat-free options than any other generation has.

However, the word “vegan” still has embedded associations for the average customer about being tasteless food that’s either tofu or a salad, and as vegans only make up about 6 percent of the population, non-vegans are definitely a demographic that needs to be paid attention to by dining service providers. That’s where Not Junk Food (NJF) comes in. Unlike most vegan concepts, the Restaurant Associates (RA) developed concept tries not to use the “V” word at all even while it is completely sustainable, cruelty-free and—crucially—delicious. The completely plant-based dishes are direct plays on recognizable fast food meals with selections like the Big IMpACT and Taco-Well Crunch, both of which incorporate the Impossible Burger vegan meat substitute product.

“NJF offers a nice middle ground for all of our customers,” says Matt Pisano, RA’s senior marketing manager, who helped developed the concept along with Tim Buma, director of culinary innovation, and Mike Smith, executive chef for RA at the Culinary Institute of America (CIA), where the concept was piloted. “Every company has a local, sustainable, plant-based program that hits on all the buzzwords but not like this. Vegans can finally feel full from a meal and indulge while meat eaters can feel better about their dining decision because they’re helping out the environment and eating less meat. It’s plant-based meals for people who love meat.”

The dishes not only benefit employee health and the environment but are an attractive option for the foodservice operation as well since, aside from the Impossible Burger meat substitute product, the station has a relatively low food cost while being able to set a price point for the items equal to the traditional versions. Meanwhile, dishes incorporating Impossible Burger components are priced higher as the product is costlier than the beef it replaces.

After its pilot period at the CIA, Not Junk Food was added to a handful of other accounts, then launched companywide this past May. The program is adaptable to different account environments and has been implemented at various sites as a “Grill Takeover,” as an action station and as a chef’s table, depending on account size, population and guest habits. The largest check average differential—about 40 percent!—was as a grill station replacement, due largely to the price point uptick, while the number of covers was about the same as usual. However, when sampling was done, covers grew by an average of 7 percent. Also, encouragingly, numbers have tended to improve slightly when the program was run for a second time.

“Once customers try the product and understand what’s happening with the program, word of mouth spreads quickly within the account,” offers Pisano.

Marketing and branding are two critical pieces of the program because of the learning curve and debunking what a “vegan” program is. Aside from avoiding the “V” word, it highlights slogans like “no animals harmed” and “food that does good but tastes better” to help create a halo effect that implies that guests can make the world a little better by simply trying what the station has to offer. Meanwhile, to “toughen” the brand’s image, the illustrations and logo consciously imitate an old-school tattoo style with inspiration drawn from noted tattoo artist Jerry Sailor.

“A lot of people thought we were lying and some vegetarians and vegans were actually hesitant to try it, continually asking us ‘are you sure there’s no meat?’” Pisano laughs. “Guests loved the fast food tie in and we continually got feedback that it was better than the real thing. Many guests commented how great it was that it’s guilty pleasure food that they can just feel better about enjoying. We can say with confidence that the program is vegan-tested and meat-lover approved!”Impossible Burger branded vegan meat substitutes play a critical role in a number of Not Junk Food recipes.