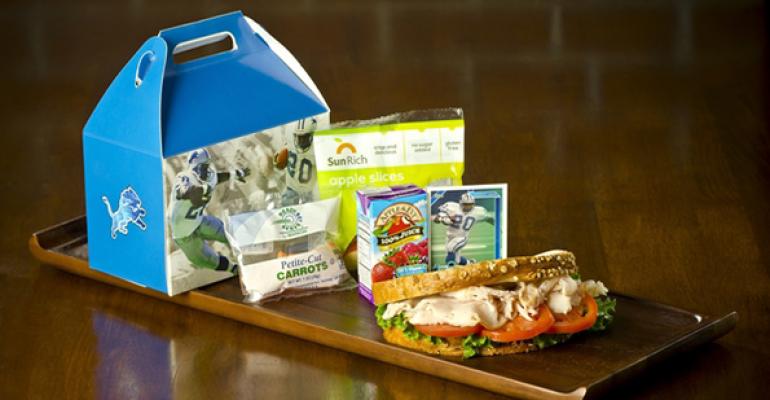 Beyond the hot dog: Meeting dietary needs for all concessions guests

Concessions operators are getting in the game of serving health-conscience and special diets fans, and everyone&rsquo;s winning.

Foodservice has been catering to guests requiring special diets or who want to eat healthier for a long time. Now they are getting into the sports concessions game, too, taking what they have learned and accomplished in the traditional foodservice setting to sports arenas.

With sports venues amassing crowds upwards of 100,000 people, there is good money and good will in catering to those requiring or wanting game food beyond the staple burger, fries and pizza.

Here are examples of foodservice operators—at both the college and professional level—winning the special diets concessions game.

In November 2015, the University of Maryland (UMD) Dining Services team transitioned a traditional concessions stand at the Xfinity Center on campus to Testudo’s Kosher Korner. The Xfinity Center is a 17,500-seat arena that hosts multiple events throughout the year, but is most known for entertaining the university’s men’s and women’s basketball games.

According to Joe Mullineaux, senior associate director, it took over 18 months of planning and coordination with the University of Maryland Chabad to get the kosher concession stand up and running.

“Of the total 35,000 students on campus, approximately 6,000 are Jewish,” Mullineaux says. “The impetus to create the stand was to not only offer these students an alternative option but to offer all fans a different and exciting high-quality game-day dining experience.”

A mashgiach is required to supervise the kashrut (the dietary regulations of Judaism) status of a kosher eating establishment. So the dining services team partnered with Rabbi Backman and the UMD Chabad to create Testudo’s Kosher Korner.

Planning for the stand was done solely by dining services and the staff and students from Chabad. Mullineaux worked with Rabbi Backman to create the menu, and the dining services procurement team worked with Backman to make appropriate purchasing decisions. Rabbi Backman, or another person from Chabad that has been certified, serves as the mashgiach (a supervisor to ensure the kashrut status of an establishment).

They decided that the stand would be only kosher meat, serving kosher turkey, corned beef and pastrami sandwiches on rye bread, falafel pitas and baskets, popcorn, hot soft pretzels, and bottled water and fountain soft drinks.

Mullineaux says finding the product and ensuring that it gets to the stand in accordance with all kosher dietary laws is the biggest challenge with the kosher stand. While the university would love to offer a kosher stand at Capital One Field at Maryland Stadium, which is where the football and lacrosse games are played, that is not possible. These games operate during the Sabbath and there must be a mashgiach present to open, and there just aren’t enough to attend all of these games and stadiums.

“We have had a very positive response from both students and fans,” Mullineaux says. “The stand sales are over twice the amount that particular stand has ever done since Xfinity opened.”

Gluten-Free at the Gridiron

According to the Gluten Away blog, some level of gluten-free fare is currently being offered at 14 National Football League stadiums, 27 Major League Baseball parks and 14 National Basketball Association arenas.

This is what prompted Dean Wright, LD, director of Brigham Young University Dining Services, to offer a gluten-free concession stand on campus.

“In the past we offered gluten-free products in our regular stands, but we wanted our guests to know that we truly cared for them and were able to offer a variety of products,” Wright says. “I attended the Miami Bowl last year when the BYU football team played. I noticed in Marlins Park, where the bowl game was held, there was a gluten-free concession stand. Noting that this was an example of true hospitality, I decided to create a similar venue in LaVell Edwards stadium.”

According to Wright, average attendance at BYU’s LaVell Edwards stadium is 65,000.

After getting enthusiastic support from the President’s Council, Wright decided to give the project to Kelley Williams, who is the office manager for dining services and has celiac disease. She ran the project with Aaron Black, BYU dining services’ concessions general manager.

“While the original concept was to serve those who eat strictly gluten-free, we were happy to see that those without any dietary restrictions were also customers,” Wright says. “Our menu and product quality spoke for themselves, and guests were willing to pay the higher price because of the quality of the food.”

According to Williams, gluten-free menu items include pizza, barbecue pork sandwiches, hot dogs, cookies, brownies and a different brand of potato chips to stand out from dining services’ regular line. Dining works with a local gluten-free bakery to procure buns, which are individually wrapped to prevent cross-contact. Pulled pork is prepared in the cook-chill operation, which is in a gluten-free room of dining’s Culinary Support Center. Brownies and pizza crusts are made by BYU’s Executive Pastry Chef Fernanda Dutra, who ensures the products are individually wrapped.

All employees involved in the preparation and handling of gluten-free products receive training to learn how to prevent cross-contact, and the stand is an independent location so that gluten-free offerings are not mixed with other products.

“We did not do this as a money-making operation but to break even,” Williams says. “When we made a small profit, we were very pleased. Our fans who are celiac truly appreciated we were thinking of them. Nothing beats hearing from an 11 year old, ‘a big thanks for thinking of him.’”

Serving healthier fare at ball games is nothing new, but there is a big difference between offering a salad here and there and creating dedicated programs with logos that help fans identify healthier options available and providing the nutrition criteria for these better options.

Starting in fall 2016, the University of Michigan plans to open a dedicated stand called the Training Table, which will offer healthier options at Michigan Stadium—the largest football stadium in the country, which averages 110,000 fans per game. If the program is successful, the hope is to carry over the program to the basketball arena.

According to Jon Collier, general manager with Sodexo at the University of Michigan concessions program, Training Table will be based on the Mindful by Sodexo program.

“The Mindful by Sodexo approach focuses on the transparency of ingredients, delicious food, satisfying portions and clarity in messages so that making mindful choices becomes second nature,” Collier says. “We will be focusing on high-quality, lean protein, complex carbs, low sugar, and organic and local whenever possible. Training Table will also feature vegan and vegetarian options.”

Collier aims to offer many of the same items currently being served to fuel the performance of the university’s student athletes at Training Table.

“Within the parameters of attending a college football game, we wanted our fans to have the choice of balancing nutrition and taste with a bit of indulgence,” Collier says. “Although it is based on the Mindful by Sodexo program, Training Table will also reflect the university’s own commitment to and focus on wellness and nutrition.”

While planning and branding is still in development, Collier assures that clear nutrition information will be a part of the presentation, as it is an integral part of the Mindful by Sodexo approach.

Levy Restaurants, which provides foodservice for college and professional sports arenas, has got skin in the healthier food game, too.

Nader works with the Ford Field culinary team to create the menu each season. Once it’s created, he works with the SJMHS dietitian to determine which items will be noted as Healthy Choice on the menu.

There are over 50 Healthy Choice menu items, which are identified with an SJHMS logo. Menu items are also identified with symbols identifying them as vegan, vegetarian and gluten-free.

The Healthy Choice program also offers a kids’ meal, called Barry Sanders Fit and Fresh. It’s a turkey sandwich with apple slices, baby carrots and a juice box that comes with a Barry Sanders collectors’ card and is packed in a takeout box with a photo of the famed Detroit Lions player.

“This new initiative has been successful throughout the stadium,” Nader says. “Guests are more aware of the healthier options and have voiced their appreciation. For example, we’ve seen more fans ask for the Barry Sanders Fit and Fresh meals as a result of the new promotion.”