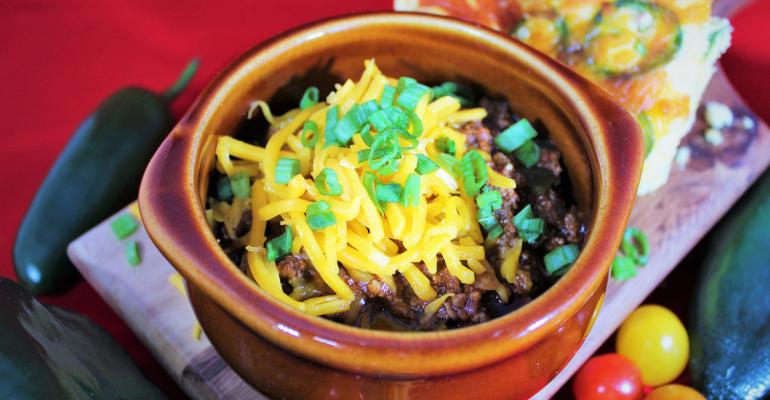 Chefs are stirring things up for chili season, simmering and seasoning their signature chili recipes, then pouring it over a variety of menu items from burgers to baked potatoes, upping the cozy-comfort factor in an instant. Also, meatless chili, chicken chili and Cincinnati chili.

The blustery breezes of autumn mean one thing to chefs: It’s chili season! And remember, “blustery” can be relative. You don’t need a Nor’Easter snowstorm to get cozy with a bubbling cauldron of chili. Just ask Cara Baldwin, VP of hospitality at LivGenerations, a senior dining operation in Tempe, Ariz.

“Arizona is starting to cool down, so chili is coming back on our menus,” Baldwin says, pointing out a cool new menu item, the Sun Devil chili burger, served at Tukee Urban Kafe (TUK), a venue that’s open to residents, staff and the public.

Related: 21 chili dishes to fire up the menu

LivGenerations Dining Director Lauren McFoy and Executive Chef David Soto came up with the burger, which gets big-time Southwest flavor from roasted poblano peppers and pureed tomatillo. The meat is a combo of chorizo and ground beef, which gets seasoned up with cumin, granulated onion and oregano.

While chiles (hot peppers) are obviously key for defining the flavor of your chili, McFoy and Soto encourage thinking outside the can with beans: you might find Great Northerns, cannelloni, black beans or kidney beans in the pots. In addition to the burgers, the chili is served in good old cups and bowls, and also on hot dogs, brats and in bread bowls. 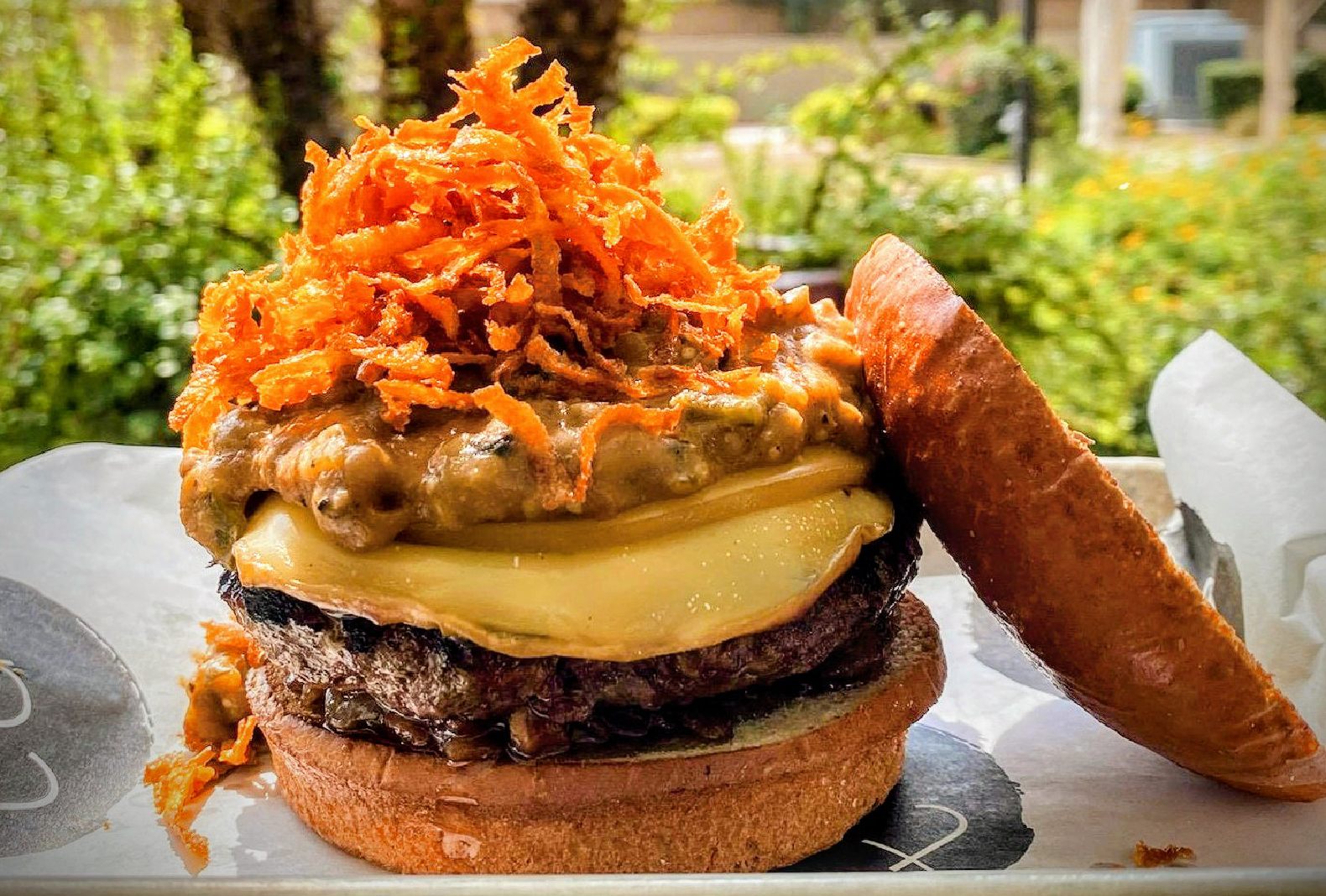 Speaking of brats, Chartwells Chef Kelly Pfab makes a brat-based chili at Quincy University in Illinois. She slices the brats then combines them with beer, a few different kinds of beans, canned tomatoes and seasoning for a slow simmer. 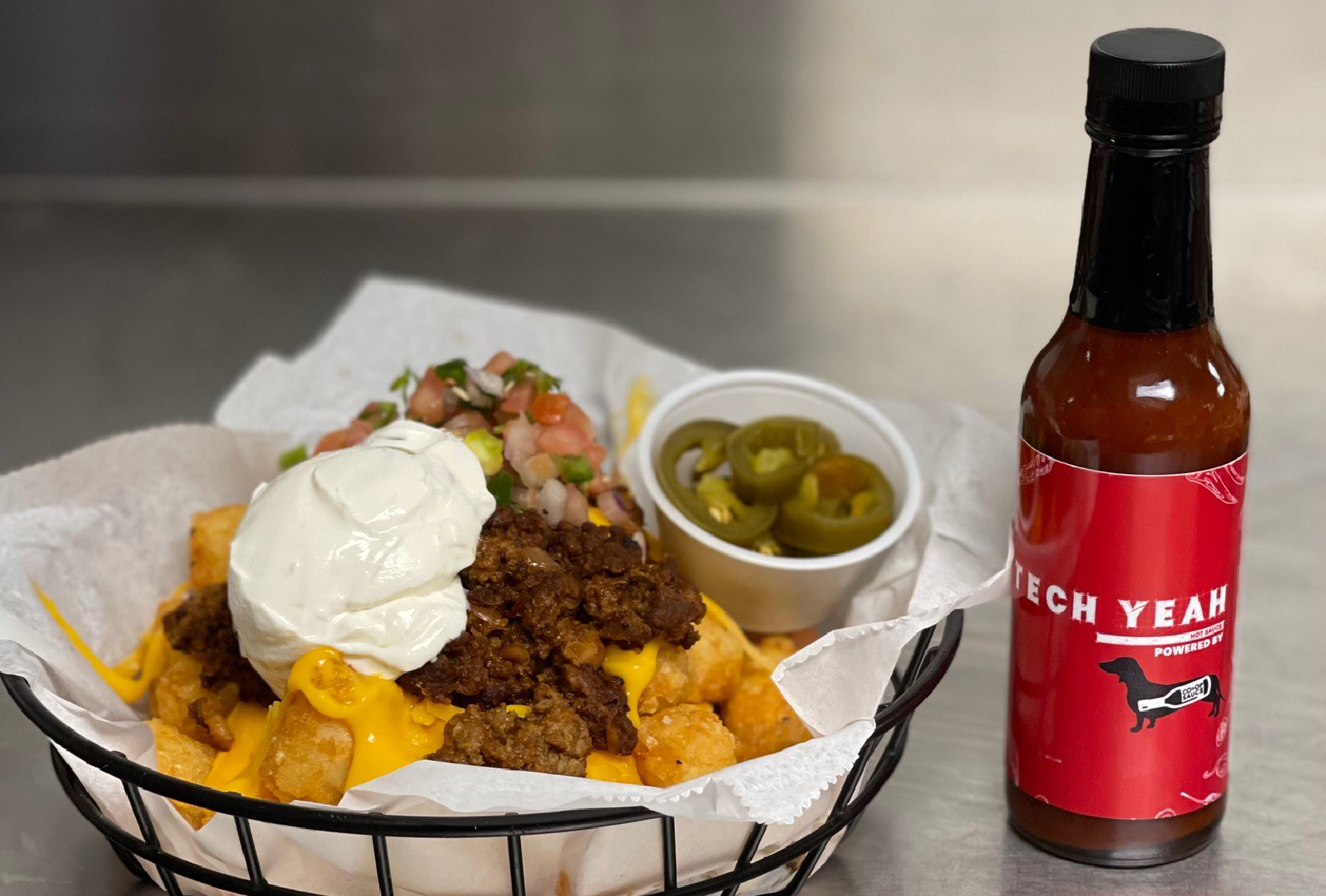 These tots get fired up with beef chili at the Illinois Institute of Technology, where Chartwells Executive Chef Mark Angeles makes “Tech Yeah” chili with halal beef as a signature at the on-campus bar and restaurant, The Bog.

Chili as an ingredient can pack an even bigger punch than chili in a bowl.

At the Illinois Institute of Technology, Chartwells Executive Chef Mark Angeles makes “Tech Yeah” chili with halal beef as a signature at the on-campus bar and restaurant, The Bog. There, you can find chili as part of loaded nachos and loaded tots.

And at SUNY Plattsburgh in upstate New York, the chili of choice is even called “sauce,” suggesting it’s meant as a topping, and is inspired by the Michigan Hot Dog, a staple in the area (confusing, we know!). The “sauce” is poured on Frito pies, a staple on the menu.

“Our favorite chili recipes always push the flavor envelope,” says Christopher Mihalyi, Chartwells resident district manager at SUNY Plattsburgh. “You can get very creative with aromatics, protein and starch combinations. Chili can be seen as a cold weather dish, but here, we try to bring the flavors of summer to the heartiness of winter for a perfect fall chili.” 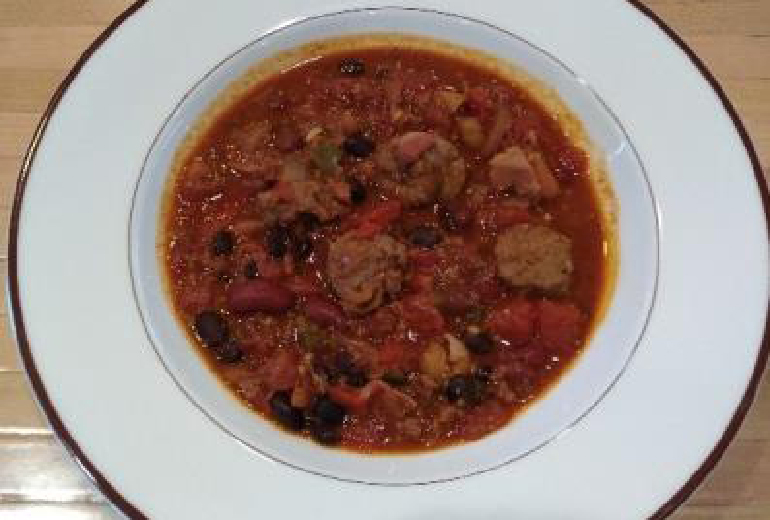 Meatless and loving it

When talkin’ chili, Mihalyi also emphasizes that animal meat isn’t a must for a great one. He’s found that customers love vegan white “chicken” chili, using plant-based chicken with flavors focused on lime, jalapeno and smoky cumin. The best way to serve it, Mihalyi says, is over angel hair pasta with a bit of pico de gallo or guac on top.

Another chili that makes the most of a plant-based alternative protein can be found at the University of Alabama, where Shirley Miles, food service director with Fresh Food Company, Bama Dining/Aramark, uses meatless “beef” for a vegan chili, which she pours over a jalapeno cornbread waffle.

We’ve heard so much about the chicken sandwich wars, maybe it’s time for chicken chili to step into the spotlight. Bama Dining’s District Executive Chef Justin Baunach smokes chicken leg quarters for a couple of hours, then pulls the meat from the bones and saves the smoky bones for the stock in a white-bean smoked chicken chili that gets garnished with the classics: Shredded cheddar, scallions, sliced jalapenos and sour cream.

Aramark Chef Manager Skyler Amdur at Round Rock ISD makes a hearty chicken and white bean chili that uses chipotle peppers for the smokiness. The students at Round Rock like spicy food, so Amdur isn’t shy about turning up the flavor, and pairing it with corn bread or any other grain for a school meal with tons of comfort.

And if you’re looking for another protein to try, bison makes a great chili. Just ask Aramark Executive Chef Jim Todaro of Georgian Court University, who makes a traditional beef chili and also a bison version.

Although the university is in Kentucky, Cincinnati’s chili influence runs deep, and Bailey recalls a memorable deep-fried chili-cheese coney dog at a festival. She recreates this unique chili for the dining hall, now, too. Unfamiliar with Cincinnati chili? It’s worth getting to know! Redolent with cinnamon and nutmeg, this style of chili is thin and pourable, and comes in several “ways” including over spaghetti, with cheese, diced raw white onions and beans.

Another out-of-state kitchen reveling in Cincinnati’s unique chili is Eastern Michigan University, where Executive Catering Chef and Ohio native Robyn Corvin makes Cincinnati chili with ground beef, turkey or plant-based ground “beef.” He’s even turned this chili into a dip and a casserole.