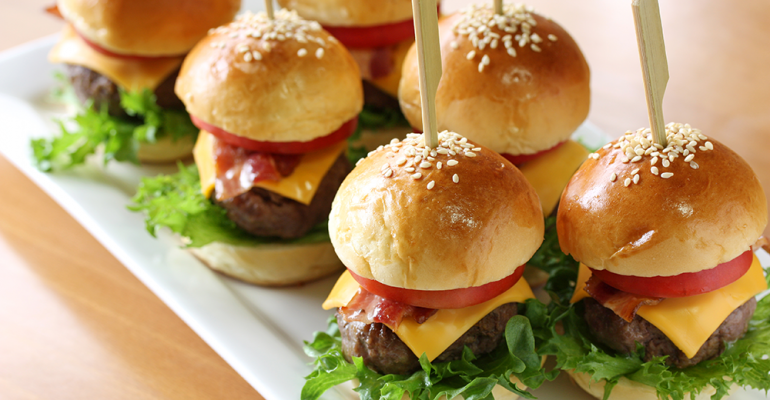 Building on the better burger trend

New burger builds and fresh burger concepts are keeping the sizzle going; ideas to try; and the importance of stepping back and recalibrating the basics of burger bliss.

Sizzling beef smashed on a flattop, smothered in melty cheese, crowned with a briny pickle and captured in a soft bun with ketchup dripping down your elbows. Does it get any better than that? In order to keep up with the better burger trend, chefs are looking at ways to make burgers tastier (smashed), faster (just three touch points!), more fun (it’s all about the branding) and more unusual (hello, ravioli burger).

Changes are afoot at the Microsoft campus in Redmond, Wash. First, longtime director Mark Freeman has left for Ford. And next, Microsoft is currently undergoing a “compression” of the campus in which 18 buildings will close and between 10,000 and 12,000 employees will be displaced into other buildings. That means more people to serve.

One low-hanging fruit that Craig Tarrant, executive chef with Eurest Dining Services, was quick to act on has been burgers.

“We are actually going back to basics,” Tarrant says. “We’re only putting burgers on our menus that have three touch points or less.”

Speed of service is the name of the game in his reasoning, and Tarrant is also thinking of labor.

“With less touch points, the skill set can come down a couple of notches,” he says, adding, “but that’s not to say we wouldn’t do an LTO of a burger with six to eight touch points.”

But fewer steps doesn’t mean less flavor options; specialty burgers just come around on a rotating basis rather than being available all the time. For example, a rotating cast of dressed-up burgers like mushroom-Swiss and a patty melt prevent any cheeseburger menu monotony. 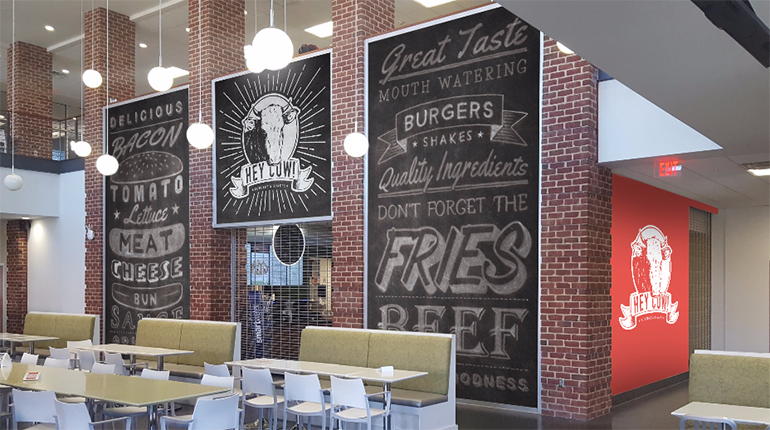 The chalkboard look used at Liberty U’s burger concept just screams “cool eatery here!” so it’s a great choice for burger concepts that like to add a little style to the burger.

After two years of so-so sales at UFood Grill, a concept at Liberty University, the dining team looked to national chains Cook-Out and Five Guys for burger inspiration, since those types of burger places are popular with students. Over the summer, the brand and menus of Hey Cow! came about. Taste tests of burgers and milkshakes strengthened the idea, and since it’s opened this semester, there’s been a constant line.

“The name ‘Hey Cow!’ actually comes from a car game that anyone can play,” says Ryan Wheeler, marketing pro with Sodexo at Liberty U, referring to a road-trip game in which passengers take turns shouting, “Hey cow!” out the window, and seeing how many cows they can get to turn around.

“Basically, we wanted to have a burger place that gives off a fun, lighthearted presence,” Wheeler says.

2. Caprese polenta burgers: Speaking of buns, another outside-the-bun idea is to skip the buns altogether and create something totally new with disks of polenta, griddled until crisp? Get the recipe here. (Photo: The Beef Checkoff)

4. St. Louis burger: Mama mia! This burger features a cheese ravioli on top and ricotta cheese blended into the beef. Get the recipe here. (Photo: The Beef Checkoff)