University of Northern Colorado’s latest concept brings personal-size global pies to the table (or to eat on the go).

From meat pie in England to quiche in France, empanadas in Latin America to bunny chow in Africa and good old pot pie in Anytown, USA, many cultures bake up comforting, portable pies. There are a few pie shops popping up across the U.S., such as Pie Face and Dub Pies in New York City, Panbury Pie in Atlanta, PIE in Seattle and The Proper Pie Co. in Virginia.

But it’s not just the commercial side getting in on the action. At the University of Northern Colorado (UNC) in Greeley, Chef Aran Essig and Pastry Chef Jen Moore have gotten in on the savory pie trend in a major way with Pie Café, a concept that opened in January on the first floor of UNC’s Campus Commons, a $73.6 million new building on campus.

Savory pies are “not a major trend you see,” Essig says. “Not yet…maybe we’re ahead of the curve.” 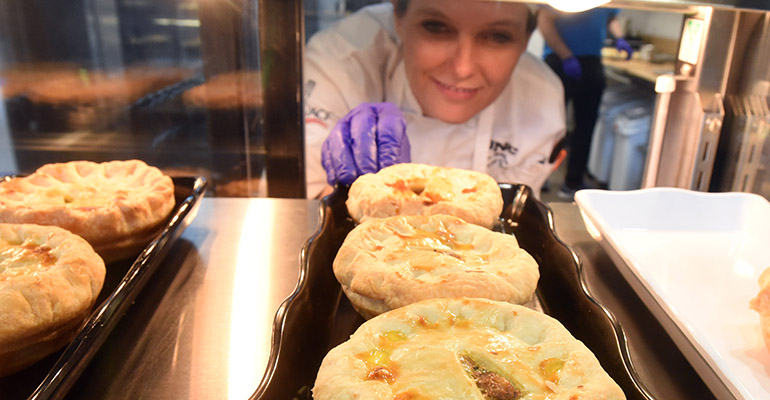 Essig and Moore have traveled far away from American apple pie to the UK and Australia and were charmed by the selection of savory pies and the way they’re offered in other parts of the globe.

“We talked to people who grew up in Africa, and they said pie shops are everywhere; they’re like the corner bakery,” Essig says.

The foodservice team had been working with the dietetics and food science schools to develop the concept, which led to rigorous research into the pie dough in particular.

“They helped us in researching all types of flour,” Essig says. “We wanted a crust that’s flaky, but not messy…tender but will hold up to eating by hand.”

Lots of adjustments of flour, butter, liquids and mixing methods were made, and after months and months of testing, the perfect pie dough for the Pie Café concept emerged. A custom-made 4 ½-inch pie pan made at a local welding shop was another piece of the puzzle. Pie weights for blind baking pie crusts for quiche or cream-based pies, traditionally a handful of loose marbles or beads, were made from a ball chain, measured into the exact length needed and there’s no risk of spilling all over the floor, Essig says.

The team created a gluten-free dough, and while it’s not kept away from the other dough, people with gluten sensitivities have reported no problems thus far. “We let our customers know there is flour in the place,” Essig says.

After the fine-tuning of the dough came the fun part: creating hundreds of new savory pie flavors (and a few sweet). The first prototypes were classic American chicken pot pie and a savory beef pie. “We expanded from there and now there are about 150 varieties,” Essig says.

The amazing variety of pies include curry pot pies with shrimp and red curry, Australian meat pie with ground beef and onion, sweet potato pot pie with rosemary and pork, vegan artichoke and white bean and Moroccan lamb and apricot to name a few.

The Moroccan lamb pies, made with Colorado lamb (leg inside round cuts) provided a chance to combine sweet and savory into one pie, thanks to the apricot and the warm spices, Essig says. 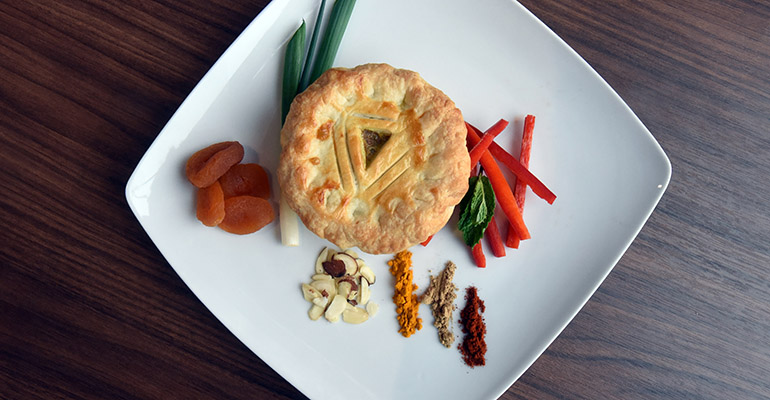 Essig is also psyched about a chicken cordon bleu with hunks of chicken, ham and cheese in a pie crust. “We just kept brainstorming different ingredients,” he says, “taking classic dishes and making them in to pies.”

There are still lots of flavors to be explored, since “just about every country has a pie,” Essig says, adding that he’ll be looking at Jamaican savory pies that contain spicy achiote paste in the crust and possibly “bunny chow,” the African meat and bread snack.

The menu changes daily with the most popular pies served every day, and about 200 pies are served. There’s also fun item called pie fries: pie crust strips tossed in cinnamon and sugar and served with a choice of icing or cherry pie dipping sauce. Larger pies can be made for special events.