Could the customization craze be slowly losing its grip on diners? At Yale University and the University of Missouri, dining directors have been making a subtle move away from completely do-it-yourself concepts with many ingredients to more focused, composed meals with flavors developed by the professionals (i.e., chefs).

The s’mores trend is just heating up, and like the classic campfire dessert’s molten marshmallow center, this trend is sticky. The chocolate-marshmallow-graham cracker combo is showing up everywhere, from milkshakes to cupcakes and even a foie gras s’more, shown here on the catering menu by Chef Jonathan Pye of Kansas City’s Nelson-Atkins Museum of Art. S’mores were also the inspiration for a new donut at Onondaga Community College in Syracuse, N.Y., which included crazy donuts like the Doritos donut and the sunflower crunch donut and even a Buffalo chicken donut. The wild donut concept has gone on to other American Dining Creations accounts as well.

Want to hit a home run with millennial and Gen Z customers? Look to the dumpling. According to Datassential’s FLAVOR report, 26 percent of millennial consumers and 23 percent of Gen Z consumers love dumplings.

Seafood as a snack
Centerplate/the Saints

Shrimp in grits in the morning, fish tacos in the evening and popcorn shrimp in between? That’s an example of just how deep seafood’s appeal and daypart opportunities can go. According to Datassential’s recent Seafood Keynote Report, 88 percent of consumers report snacking on items like popcorn shrimp, sushi and calamari.

Snacking to indulge yourself
Purestock/Thinkstock

Speaking of snacks, snacking occasions are twice as likely to be “driven by the desire for a reward or indulgence” than meal-based occasions, according to a study of 20,000 diners from age 13 to 75 by Coca Cola Foodservice.

Hispanic-style cheese on the menu has been growing in the last four years. Since 2013, cotija—firm, crumbly and salty—has increased in retail volume sales by 6.4 percent. Queso quesadilla, as its name implies, is the melty cheese that can make quesadillas extra craveable. It’s increased in sales by 11.8 percent since 2013. And other Hispanic-style cheeses such as queso blanco and queso fresco are also getting more popular. About a third of these cheeses are produced in Wisconsin, where cheesemakers are taking their own slice of this new cheese opportunity.

Algae for its nutrients and sustainability
Amarita/iStock/Thinkstock

At a recent Future of Food panel by Les Dames d’Escoffier New York, Susan Ungaro, panelist and president of the James Beard Foundation remarked that “food is fuel; food is medicine; food is community and food is happiness.” This statement introduced the theme of untapped culinary resources found in the ocean, with the possibility of introducing new sustainable, super-healthful-to-eat species to consumers, such as algae. It’s easy to grow and already being used by several cutting-edge manufacturers in milk, vegan eggs, ice cream, salad dressing, baking mixes, cookies and more.

Using a branding iron to create a cool signature item is one way to make your mark, as seen here at Centerplate sports venues in New Orleans.

Customers are increasingly comfortable with such things as menu screens for ordering and robot room service at hospitals and hotels.

The concept of self-care has been emerging as a guiding principal in consumers choosing food that nourishes and pampers the body and soul. According to Mintel’s Global Food & Drink Trends 2018 report, “As more consumers find modern life to be hectic and stressful, flexible and balanced diets will become integral elements of self-care routines.” And the trend is getting very personalized. Moon Cycle Bakery is a baked goods delivery service that “aims to help women redefine their ‘time of the month.’” And as the tagline says, “encourage women to celebrate the magic that lives within their menstrual cycle and nourish their bodies while still feeling satisfied.” Subscribers—or “moon mamas”—input their likes, dislikes, food allergies and the timing of their monthly cycle to receive the treats when they’re in peak PMS/craving mode. Within the attractively packaged box is three carefully wrapped baked goods that contain hormone-balancing ingredients like flax seeds, ginger, primrose, black beans and chia seeds.

According to a recent report by Datassential, the flavor of Earl Grey tea is taking the nation by storm. A tempest in a teapot? It seems that operators looking for unique flavors are turning to the bold, floral flavor of Earl Grey in ice cream (at Molly Moon’s in Seattle), cocktails (in the Earl Grey Old Fashioned at Kona Grill in Scottsdale, Ariz.) and in a raspberry cake (at Café Life Bake Shop in Philadelphia).

The sensory memory of candy that fizzes and pops on your tongue is becoming a dessert-menu must have. Chef Hari Cameron of a(MUSE.) restaurant in Delaware recently created a walnut-churro dish with a coating of citric acid, which brings that tangy twist to just about anything.

Gettin’ figgy with it
Chartwells at Canisius College

Figs have come a long way since the Newton. Canisius College’s on-trend, onsite catering team recently created this fresh fig and lemon curd dessert for a “shabby vintage” vegan gala celebrating a two-day vegan cooking training session with the Humane Society of the U.S. This dessert not only features fig, a fruit that’s coming into its own on sophisticated menus, but also lavender—notice the little blossoms—another “it” flavor for the new year.

Beefing up on bold flavors

Chimichurri, as seen on this flank steak at Georgia State University, is just one of many zingy, herbaceous sauces that can turn many different cuts of beef into something exciting. If you like flavor-packed sauces like chimichurri, try branching out into variations like gremolata, persillade or pistou, all of which can be used on different types of meats or grilled veggies.

Nitro ice cream and other flashy culinary tricks continue to impress. Seen here, Taher school chefs joined farmers for a meal that was futuristic and rustic at the same time. 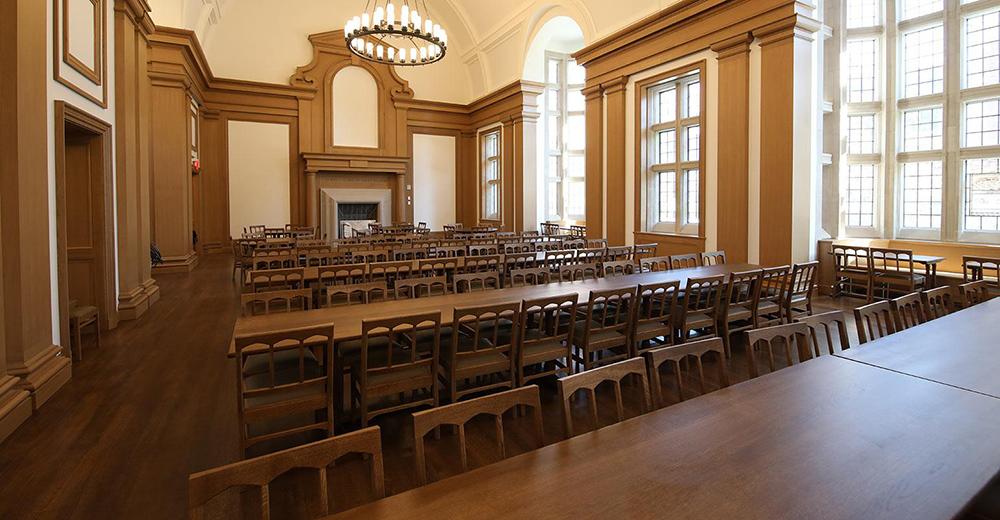