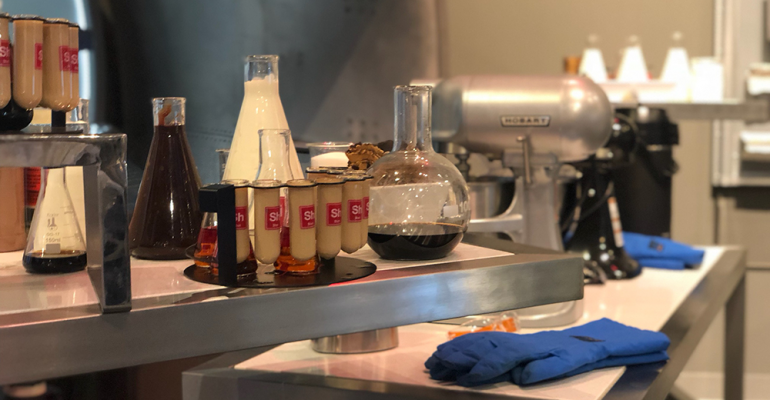 Starting next month, the Great Lakes Science Center in Cleveland will be a whole lot cooler. Minus 320°F to be exact. The Nitro Vibe Lab, which kicked off at an event earlier this month, opens to the public June 1, creating an educational—and delicious—experience.

Behind the project is the culinary team from Levy Convention Centers, who have really gotten into the process of rapidly freezing liquid ice cream mixtures into the creamiest, dreamiest ice cream possible through science.

“Liquid nitrogen causes fat and water particles to stay very small,” says Marian Ciocioc, general manager for Levy at the science center. “Any remaining nitrogen leaves as a gas. The rapid freezing of fats delivers a very creamy texture, and we avoid ice crystals in the structure. The whole process is cool for students to see.”

Indeed, those who have never seen nitro ice cream being made are in for quite a show. The nitrogen creates a big cloud over an ordinary mixer as water vapor condenses into small water droplets. That’s actually the same chemical process that happens over oceans each morning, Ciocioc points out.

The Nitro Vibe Lab is adjacent to the science center’s Levy-run café and close to the patio, perfect for upcoming summer days. Visitors will get to sample lots of cool flavors, as well.

“We’ve had a lot of fun getting creative and trying out new flavor concepts,” Ciocioc says. “We’ve tried out the classics such as chocolate, vanilla and cookies and cream, but also a few out-of-the-box ideas like Kahlua mudslide, Malibu coconut, espresso Baileys, rum and coke float, white Russian, maple bacon and cucumber lime. We’ve also been experimenting with dairy-free and vegan flavors.”

Some of those flavors are alcoholic, which won’t be offered at the lab, but could make appearances during special catered events like the one that introduced the concept.

The protein-rich milk used to make the ice cream comes from down the road in rural Ohio’s Amish country. As for tips and tricks for trying out nitro ice cream, Ciocioc says patience is the greatest virtue.

“You need to slowly add in the liquid nitrogen until the mixture starts solidifying,” she says. “Adding too much nitrogen will transform the mixture into a hard, solid product. The second trick is to stir continuously until the liquid has completely evaporated.”

Then, the only thing left to do is enjoy the sweet treat at the end of the science lesson.