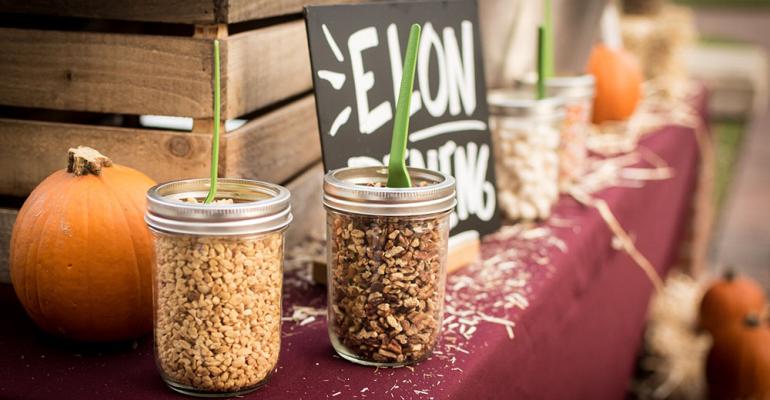 Embracing the pumpkin spice phenomenon to its fullest, chefs and bakers are letting the flavors of pumpkin pie open the door into different fall flavors, with detours for maple, pecan, marshmallow and some surprises planned along the way.

Each year this past decade, Starbucks has released its PSL (Pumpkin Spice Latte) a little earlier. This year, the beacon beverage of fall flavor arrived on Aug. 27. More than a great product for Starbucks, pumpkin spice itself is a cultural phenomenon that’s grown up alongside Instagram, home this time of year to millions of cozy fall posts with soft sweaters, crunchy autumn leaves and, of course, a big mug of pumpkin spice latte.

With the arrival of arguably way too many pumpkin spice products (dog food? deodorant?), some were quick to say this oversaturation has gone too far. But now, there’s a “backlash to the backlash,” culture reporter Rebecca Jennings writes in Vox, “the possibility that nobody really cares that much anymore. We seemed to have hit peak ‘pumpkin spice hot take’ in the year 2014.” Or, as Eater put it, “Pumpkin spice has outlasted the ire of its detractors.” 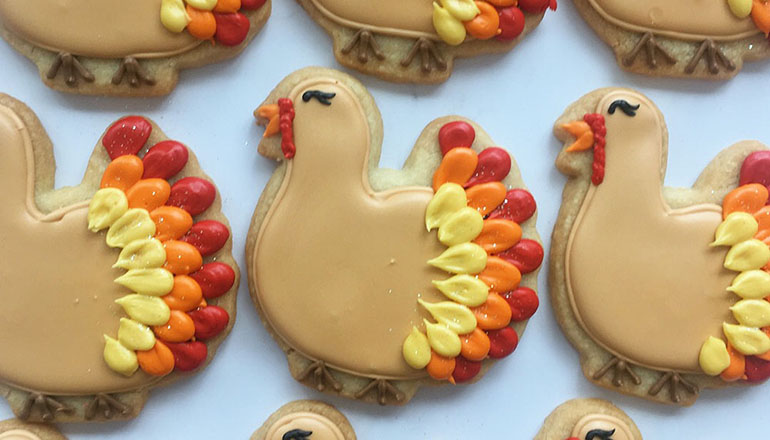 “I think it’s a niche that if you don’t grab onto it, you’ll miss out on those ‘Oh, my God, it’s pumpkin spice season’ people,’” says Justin Newgaard, a corporate executive chef with Morrison Healthcare. “And it’s a great way to introduce any new flavor concepts you want and spin off new products. It’s not just ‘pumpkin spice’ but bringing in root-to-stem thinking, using pumpkin seeds, a healthy fat with a bunch of nutrients, or looking at what the spices themselves can do for our bodies.”

So let’s see where this love of pumpkin spice flavors can lead us next.

The fall season brings with it feelings of homecoming—and not just football festivities—coming home to flavors that comfort, especially in the sweet world of desserts.

So naturally, Newgaard is thinking back to childhood holidays spent “in the middle of nowhere” Missouri at his great-grandparents’ dairy farm, where the produce grown there was canned (aka, “put up”) and holiday dinners featured a harvest of local dishes. “The green bean casserole wasn’t made with canned cream of mushroom soup,” he recalls. “The green beans were grown there, and the cream was from our cows.”

Now based in Kansas City and traveling throughout the Midwest to help onboard Morrison Healthcare accounts, Newgaard says we shouldn’t fight that pumpkin-spice feeling.

That’s something that rings true for the students at Prairie Hills USD 113 in Kansas, where pumpkin bars are “the undisputed favorite”, says Brook Brubeck, the district’s foodservices director. “They will choose those any day over any of our other muffins or breads.” 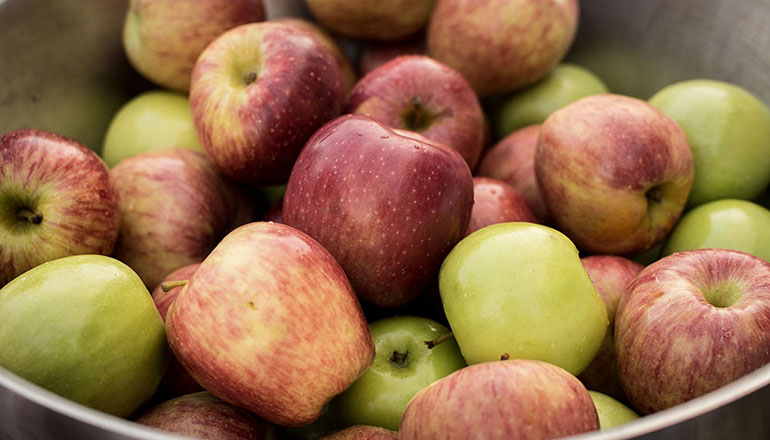 When making a custom ‘pumpkin spice’ blend for the bars, Brubeck tends to reach for “a little more ground allspice” in ratio to the other spices, she says. “It adds that little extra something special.”

“Pumpkin may be king at the moment, but in my mind apples and autumn are the perfect pair because I grew up on an apple orchard,” she says. “Obviously, this has a big influence on me, with fond memories of cool fall days spent picking apples and pressing cider, so to me, nothing says fall like a warm apple crisp.” 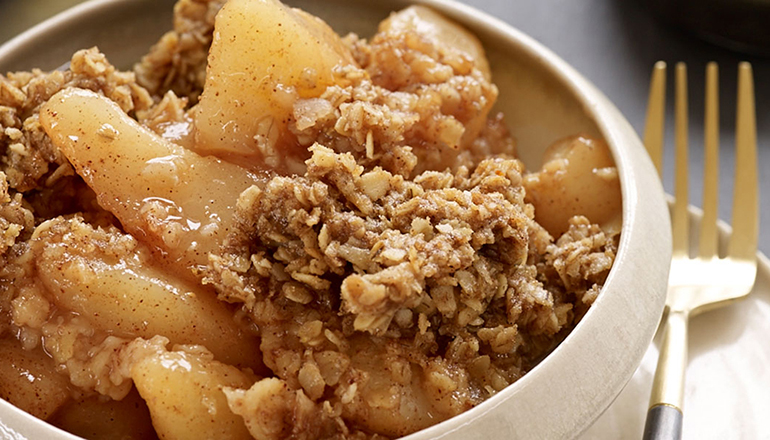 Speaking of crisps, Newgaard finds that fruits like peaches and berries are in a sweeter, softer state at the end of summer. That makes them harder to work with in a way but opens the door for dishes in which that consistency is perfect: crisps and cobblers.

“In the fall, you’ve got beautiful peaches and pears coming into the end of their season and they’re a little softer,” he says. 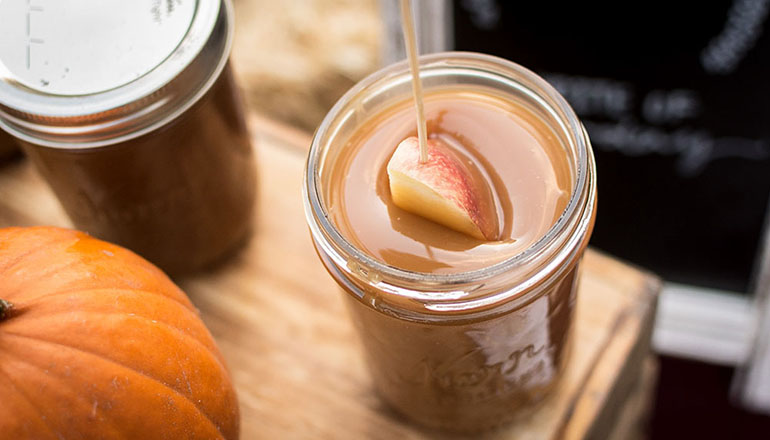 Caramel apples for the win

At Elon University, the North Carolina climate means fall is more pleasant breeze than changing trees, but the dining team makes the most of the season with a DIY caramel apple bar, offering a more gourmet take than your country fairgrounds for sure.

With a metal barrel that looks perfect for bobbing for apples, Elon’s caramel apple bar shows off local ingredients with cute chalkboard signage. The caramel is ready for dipping and the experience becomes an incredibly interactive way to get into the fall spirit. 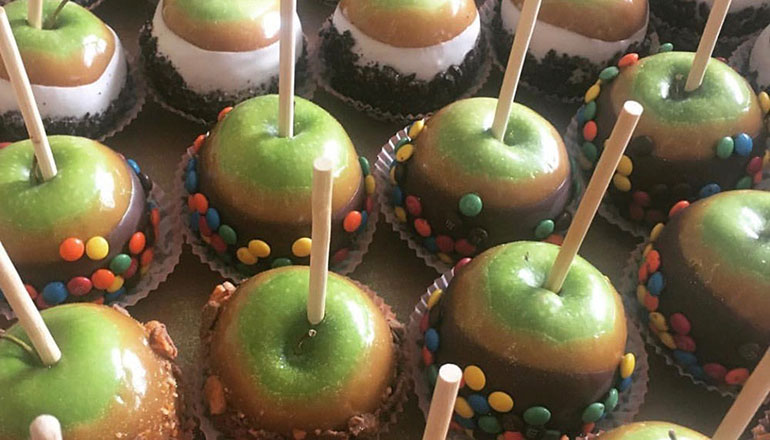 Caramel apples are also big at Sodexo’s operation at Alcon, A Novartis Group, in Fort Worth, Texas. Pastry Chef Nancy De Dios is a caramel apple fan and she also makes some of the most adorable fall-themed cookies ever.

Fruit is also a point of inspiration for Erica Hartzell, pastry chef at Columbia College in Columbia, Mo., which is managed by Aladdin, part of Elior North America. Hartzell is graduate of The French Pastry School in Chicago and has created pumpkin pie bites to rave reviews.

And like the other culinarians featured here, she’s harkening back to apple-picking days and making room in her fall repertoire.

“I remember apple picking with my family and then coming home and baking fresh apple pie and apple desserts with what we picked,” Harzell says. “My more recent memories include baking everything and anything fall for the students and staff here.”

Pierogis are traditionally stuffed with mashed potatoes and cheese, served with sautéed onions and sour cream, a savory Eastern European fave in the upper Midwest. They’ve turned pierogis sweet at Laurel View Village, a CCRC in Davidsville, Pa., managed by Cura, part of Elior North America. This scratch-made menu item in the fall signature dessert series is a pierogi stuffed with apples, fried, topped with a stout-caramel sauce and served with cinnamon kulfi ice cream (an Indian ice cream).

Fall desserts down under

Australia’s seasons are flipped, but this toasty Anzac slice, created by Australian cookbook author Katherine Sabbath, turns fall flavors upside down in a cool new way, a chewy, buttery way. First a bit of history: Anzac biscuits were part of Australia and New Zealand’s wartime experience. Anzac stands for Australian and New Zealand Army Corps (ANZAC), established during World War I. The biscuits arrived in care packages for soldiers, preferred because, made with rolled oats and quite dense, they didn’t spoil easily. 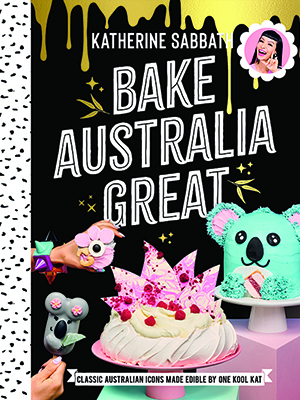