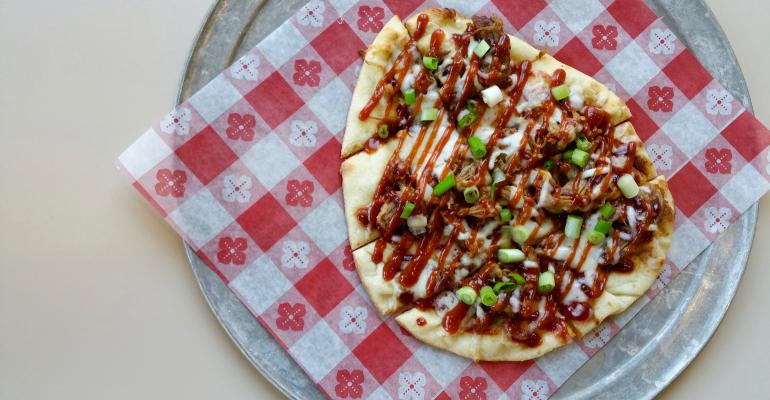 Miami University Dining
Combining barbecue with pizza; what could be better?
Food & Beverage

New BBQ concept at Miami U fills a void

With no good barbecue for miles around, new THE Q concept opened last semester, not a moment too soon, with smoked meats served traditionally and with a twist.

Those with a major craving for pulled pork and brisket in the town of Oxford, Ohio, had been going hungry ever since the only barbecue joint in town, The Smokin’ Ox, a commercial business in Oxford’s Uptown district, went out of business a couple of years ago.

Miami University Dining to the rescue. When a pizza concept at the Maplestreet Station dining location had gotten stale, bringing in barbecue was an easy decision for Geno Svec, senior director of food and beverage.

“I realized that there were no barbecue places in or around Oxford,” Svec says. “I put a menu together, did some tastings and we were on our way to THE Q.” Smoked meat is one versatile ingredient. Here, it’s part of an irresistible nacho item, one of the limited-time offers that’s been a hit at new concept THE Q. Photo: Miami University Dining

Since last August, THE Q has been creating on-trend limited-time offers such as barbecue nachos with pulled pork or beef under a blanket of cheese, guacamole, beans and sour cream. Barbecue pizza is another fun item, but the most popular so far has been pulled pork mac ‘n cheese.

Classic barbecue is available, too, with plates of smoked meat and must-have sides like coleslaw, bourbon baked beans and housemade pickles. Not being in any major barbecue region in particular, THE Q dabbles in a few styles of sauce, including the sweet, ketchup-based Kansas City sauce and spicier vinegar- and mustard-based sauces from the Carolinas. Meat cooked low and slow and served with amazing side dishes was a combination missing from the town of Oxford until Miami U opened THE Q concept last semester. Photo: Miami University Dining

Before the meats are smoked, Svec uses a signature dry rub that includes sugar (key for getting that sought-after “bark” or crust on barbecued meat), cumin, celery salt and other spices he wouldn’t share, keeping in tradition with pit masters who are happy to share some recipe or techniques, but always keep a few secrets close to the vest.

Bringing in an electric smoker didn’t pose any logistical challenges or need for renovation, as can sometimes happen in a kitchen set up, Svec says. The smoker, which can handle 192 pounds of pork shoulder at a time, fits perfectly under the hood system. Svec uses a mixture of maple and apple woods, which are presoaked in a water and apple juice mixture. A barbecue meal shared among friends is one of the finer things in life at Miami U. Photo: Miami University Dining

The smoker runs on a timer that keeps track of precise temperatures. Smoking usually starts in the morning, and the product is ready 10 hours later, just in time for the later hours (it’s open Monday through Friday from 10:45 a.m. until 7 p.m.) at the location. Although it’s pretty much automated, someone from the staff is always available to keep an eye on the smoker.

The response has been great, Svec says, and it looks like those students in search of barbecue have found a new spot.

Flavor of the Month: Treat parsnips like potatoes
Jan 27, 2020