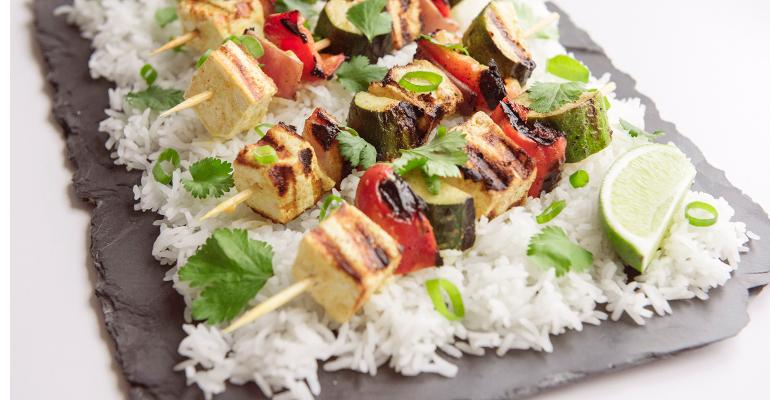 We’ve come a long way since the veggie burger. Now, when beans, veggies and grains mimic meat, they’ve got a delicious style all their own.

Don’t call it stealth health, because there’s no need to hide. These days, plant-based versions of meaty dishes are proud of who they are, no longer keeping their identity secret. This is the era of the loud and proud plant-based dishes: the cauliflower steak, the chickpea sloppy Joe and the mushroom Philly sandwich.

There’s a definite hunger out there for meatless meals that satisfy a craving for something meaty. In the past year, the sale of plant-based foods in the U.S. grew by 8.1 percent, according to Nielsen data compiled for the Plant Based Foods Association and the Good Food Institute. And it’s not just one type of consumer that’s seeking out substitutes. When major foodservice player Eurest created its new Earth Bowl concept (left) —  a build-your-own setup with produce, grains, sauces, toppings and protein — the culinary team aimed to appeal to a variety of customers, not just those who identify as vegetarian or vegan.

That last group, “veggie-focused eaters,” is an idea that has opened up a sort of veggie appreciation that may not have existed quite the same way even a few years ago. That’s why Eurest has found a lot of success with Earth Bowl, drawing amazing flavor from veggies by roasting and braising, techniques that do the same for meat.

And chefs everywhere are sinking their teeth into many other ways to reframe their own perception—and that of those they’re feeding—about plant-based perfection.

Anything meat can do, can veggies do better? Well, that’s debatable, but menu items like steaks, chops and potpies no longer require animal protein to be satisfying, hearty and stick to your ribs, all those meaty qualities that bring us comfort. The fall vegetable woodland pie (left) at Duke University is just in time for a glorious autumn in Durham, N.C. It’s a vegan option that makes the most of savory flavors with local fall veggies including mushrooms, sweet potato gravy and a crispy crust that’s made without butter.

Celery root is the key to meatless steakhouse style at Centerplate’s Saks Fifth Avenue account in Manhattan. There, Chef Alex Reyes has created celery root mignon, a mock filet mignon with crazy stage presence. Celery root’s pronounced celery flavor is something to be reckoned with when basted with culture butter (tangy butter with friendly bacteria added) and aromatic herbs. After it’s tender like any good filet should be, the celery root steak gets a hit of velvety vegan truffle demi jus. It’s served with sunchokes and little gem lettuce, another A-list veggie.

Beans have taken the lead at the University of California-Santa Barbara, where Senior Executive Chef Dusty Cooper has been working on opening a new dining unit, Portola Dining Commons, where plant-based dining is the focus.

“We’ve been using beans more as a protein source, the star of the show,” Cooper says, adding that beans have been showing up more on salad bars throughout campus as a topping and also at the taqueria. And she’s currently developing a breakfast bean tostada with sautéed mushrooms, jalapeños and queso fresco with a sunny side egg on top for the new unit.

With the new dining commons, the UC Santa Barbara chefs and cooks have been laser focused on “creating dishes that regard a balanced, healthy plate,” Cooper says.

“For our school lunches, we focus on vegetables being the center of the plate,” says Anneliese Tanner, nutrition and food services executive director at Austin (Texas) Independent School District.

Tanner says there’s a high demand throughout the district for vegetarian and vegan entrées, with at least one vegetarian option being offered daily at breakfast and lunch.

Last year, a plant-based pretender of a dish rocketed to a crowd favorite. More than 75,000 of the new vegan lentil chili Frito pies (aka walking tacos) were served over the course of the year. Other favorites include Indian vegetable curry, black bean and veggie tacos, frittatas with seasonal veggies and vegetable lo mein.

This year, Austin students are trying a new vegan entrée, the Vietnamese noodle bowl, which features brown-rice vermicelli, carrots, cucumbers and romaine lettuce with Asian dressing. This dish gets its protein power from edamame.

“We offer healthy and tasty options for our 83,000 students each day,” Tanner says. “And we view the cafeteria as a classroom where we’re exposing students to new foods and flavors, while creating lifelong healthy habits.” Rare meat…why do we crave it? Perhaps it’s an evolutionary thing held over from caveman times, but suffice to say, the meat craving is real. When seeking that certain bloody quality that makes carnivores’ mouths water, chefs can turn to the humble beet. And when looking for that umami flavor, mushrooms make the grade.

“Vegetables are so versatile and flavorful,” says Chef Patrick Browne, associate director of residential dining at the University of Montana. He’s recently been serving a beet Reuben (above), a plant-based take on the traditional deli sandwich that offers something a traditional Reuben doesn’t: that wonderful earthy flavor that makes beets so hard to beat.

A mushroom Philly sandwich, created by the Mushroom Council as part of Meatless Monday’s new e-cookbook, Meatless Monday Goes to School, which includes 30 bulk-scale, child-friendly meatless recipes and can be downloaded for free online.

A bean burrito cake (above) was developed early on, and can be found on a daily salad bar.

The next plant-based experiment with feature teff as a plant-based protein in baked items, Sample says. Teff is a grass that’s native to Ethiopia and is raised for its edible seeds. It’s high in fiber, iron, protein and calcium and can be used like quinoa in cooking, but since the grain is smaller, it cooks faster. Once a secret powder in possession of only the crunchiest hippies at the health-food stores of the 1970s, nutritional yeast has been getting more attention lately as a way to add savory, umami flavor to food. Plus, it’s a complete protein and is high in vitamin B12, with a nutty flavor that’s often compared to Parmesan cheese. Here are some uses you can try now:

Vegetarian black bean chili (left) heats things up as the days get shorter and nights get colder. This version includes tofu and kale to make it that much better. With flavor like this, who misses the meat? Photo: Bush’s Best Foodservice. And Greenville, S.C., schools’ portobello black bean enchilada (right) has a fiery sauce and mushrooms inside.

The 2020 Hospital Power Players: How the country’s largest hospitals are dealing with coronavirus
Sep 30, 2020

Flavor of the Month: Bonito is more than just a seasoning
Sep 17, 2020