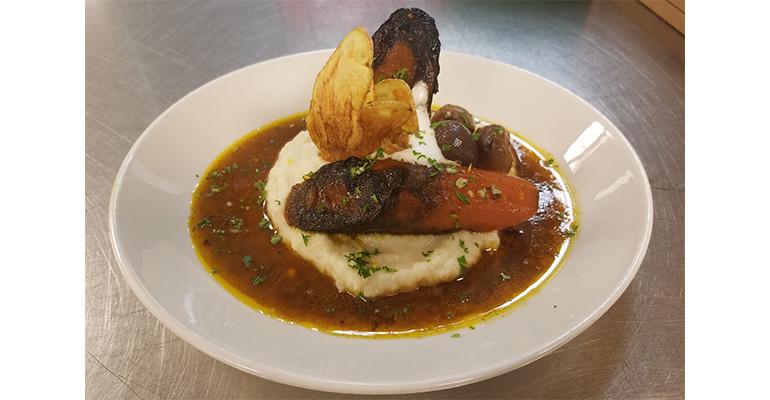 Plant-based food comes out to play

Now that so many of your customers are hip to the benefits of a plant-based diet, it’s up to you to make things interesting. Here are unexpected ideas for playful, creative and fun plant-based menu items.

The word is out about the benefits of a plant-based diet. According to new data from Mintel, nearly half (46 percent) of Americans agree plant-based proteins are better for you than animal-based options. And 46 percent of Americans trust the functional claims made by plant-based foods.

However, that doesn’t mean you can simply serve more veggies and call it a day. The Mintel research also shows that whether a diner considers themselves vegan, vegetarian or flexitarian, taste is the top reason people choose plant-based food (52 percent) above diet (just 10 percent cite that as a reason), the environment (13 percent) or even health (39 percent).

The takeaway? You’ve gotta make plant-based options tasty. Here’s how chefs are incorporating plants into dishes in unexpected—and delicious—new ways, from a kale-apple cake to carrot bacon to beet steaks and more.

Kale-ing it with these ideas

Unexpected uses of plants in food can make a statement, and in this case, a beautiful bright green dessert item. At the University of North Carolina-Chapel Hill, Kelli Wood, MS, RD, LDN, registered dietitian with Aramark, has taken “nutrition powerhouse” kale into the surprisingly sweet side. “Kale can be used in many different recipes—not just salad! It can be incorporated into baked goods to add nutritional benefits while still maintaining the delicious flavor that satisfies your sweet tooth,” Wood says.

She first tames kale’s naturally rigid structure by steaming the leaves briefly, then swirling it into cake batter for this apple cake, which gets a pretty green color—and a giant nutritional boost—from kale.

Kale can also be baked into savory pancakes, part of a brunch-all-day trend that’s been taking off lately. A recipe for cheesy corn and kale cakes (pictured above) from Roth Cheese uses kale with sharp cheddar cheese in a cross between jalapeno corn bread and pancake breakfast. The corporate chefs of Flik Independent School Dining have been working with the concept of the Protein Flip, an idea that’s inclusive of meat while making sure the bulk of the plate is veggies, grains or legumes, incorporated with meat in different ways.

The Protein Flip philosophy also allows for the flavors of meat—like a pork broth—to impart their goodness into vegetables, like the jaw-dropping roasted cauliflower wedge with eggplant-pork sauce. It’s coated with Parmesan crumbs and looks just as delectable as any chicken-fried steak ever did. Will it have bacon?

Ever since people realized how great bacon is—and how not great it is for you to eat it all the time—we’ve been looking for healthier replacements. Turkey bacon, tofu bacon, you name it. But at the new employee dining destination Table 29 inside the Sam’s Club Home Office in Bentonville, Ark., the culinary team has gone underground to find a new bacon: to the root vegetable world.

Carrots (left) are sliced into bacon dimensions, then marinated in smoked paprika, maple syrup and olive oil, hit with cracked black pepper and baked in a hot oven.

When the chefs at the University of Michigan looked at carrots recently, they saw not bacon, but bones. Specifically, the bones of a traditional osso bucco, that slow-braised dish that’s traditionally made with veal shank…a meat-centric dish if there ever was one.

For a recent pop-up plant-based dinner on the most veggie-friendly dining venue, East Quad, chefs Allan Sheldon and David Adler succeeded in turning those carrots into osso bucco and plated it beautifully (pictured at top) with fried fingerling potato crisps, pureed celery root and gremolata, the pesto-like sauce that’s a plant-based dish’s best friend, instantly imparting a zing and zip like no other to lots of vegetables.

The point of the pop-up, from the viewpoint of the Michigan chefs, wasn’t really to create replacements for meat dishes or even to raise awareness about vegetables; it was more about playing with what vegetables can do on a plate and opening students’ eyes to more interesting plant-based possibilities.

“East Quad is known as being at the forefront of vegan, local and sustainable food,” Adler says. “We do a lot on a daily basis. But this pop-up allowed us to showcase some new things and show the students what we can do.”

In other words, to play.

The pop-up event started with appetizers to set the tone: root veggie chips (beets, carrots, taro and sweet potato, crisp and crunchy) and cranberry bean hummus (above left), made eye catching with a bright olive tapenade. Then, it was onto the grilled beet steaks (above righ).

“We cut whole roasted beets into a steak shape, then grilled it so it got the grill marks, and I hollowed out the middle for a mushroom duxelle,” Sheldon says.

He also made use of aquafaba (the “juice” from a can of chickpeas), which is a favorite for vegan chefs and bakers for its meringue-like properties when whipped. Sheldon turned aquafaba into a fancy foam flavored with nutty, pungent grains of paradise to complement the beet steak.

Zucchini roulades kept the pop-up rolling, served with creamed cauliflower and spinach, cooked down with almond milk for a creamy (but cream-free) sauce. And the sweet course was salted caramel peanut butter truffles dipped in housemade dairy-free soft serve.

“I think they were blown away by the complexity,” Sheldon says.

And while there’s definitely a core group of confirmed vegans on campus, many other students are very open to plant-based meals on a regular basis, Adler adds.

“The majority of what we do at East Quad is all vegetarian and vegan options and we’re expanding to do more,” he says. “We have a strong group of vegetarians and vegans, and they know why they’re doing it. But there are some other students who want to eat meat, and also to be conscious of how much water it takes to get that burger.”