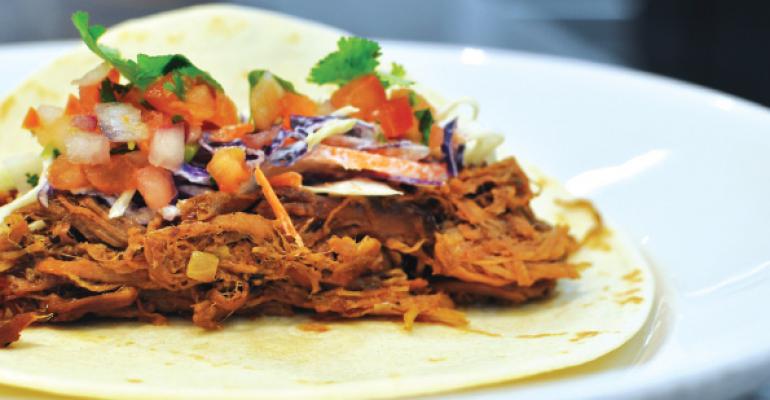 The secrets to barbecue success

No more smoke and mirrors: The secrets of true barbecue success in volume are unlocked with consistency, menu mix and the flavors your customers will crave.

Low and slow, tangy and twangy, barbecue has a lot of fans that take it very seriously. So it’s a pretty safe bet to open a barbecue concept in just about any onsite setting in any part of the country. However, people love barbecue so much that you can’t get away with relying on smoke and mirrors.

Instead, smart chefs and operators who barbecue in volume keep a few secrets to success up the sleeves of their chefs coats. Some are thinking of the barbecued meat as an ingredient to enhance different menu items, while others focus on ensuring consistency. The following tips will help you develop a barbecue style that will taste like home to happy, sauce-stained customers.

The barbecue plate certainly ain’t broke, but it can pay to fix it anyway. The plate—with its glorious selection of one or more types of barbecued meat and a couple of great sides like a vinegary slaw and/or buttery cornbread—is a simple and surefire way to menu barbecue. But that’s not stopping onsite operators from taking the pulled pork or shaved brisket and incorporating that into a regional dish. Barbecue mash-ups can gain fans anywhere.

Brisket is a spiritual experience in Texas, and if you ever visit, the food, culture and general scene of Austin will change a person, according to Steven Burke, head chef, Kinsolving Dining at the University of Texas at Austin (UT).

“They say, ‘Keep Austin Weird,’ but I don’t think it’s weird. There are so many layers of things that have been here, it’s a beautiful patina. It’ll change you,” Burke says, adding that the barbecue scene includes “places that have been here since the 1800s, and the guys that just look like butchers and they’re slicing it in front of you and throwing it on paper.”

While Austin is well known for the convergence of singing cowboys, gypsy queens and music festivals, two edible items also stir up the love in this Texas city—tacos and brisket.

A delicious merger of those two famous Austin eats is the brisket taco, which is one of the most popular barbecue items served on campus at UT. The smoky brisket is piled high on a flour or whole-wheat tortilla, and students can top it any way they like, with crumbly Mexican cheese, fresh pico de gallo, jalapeños and a spicy slaw.

About 1,100 miles north as the crow flies, at Lambeau Field, home of the Green Bay Packers, fans love barbecue and they also love brats. The foodservice team there, led by Heath Barbato, executive chef, serves a ton of brisket every game day. That’s 2,000 pounds of hickory-smoked, burnt-end goodness.

The brisket, along with pulled pork, smoked chicken and turkey, are used to gild the lily on items like brats, hot dogs and nachos.

One such item is the Legend Dog, a kosher hot dog topped with either shaved brisket or shaved pulled pork, topped with housemade barbecue sauce (more on that later) and crispy onions. This hefty dog can be found at the three Legends Smokehouse stations around the stadium, as well as  on the menu for the 175 suites (mini catering buffets, essentially).

The Chipper is housemade kettle chips topped with barbecued meat, sauce and onions. Another mash-up is Brat-chos (brats and nachos).

“No matter what we do, people in Wisconsin like their brats and their cheese curds,” Barbato says.

Dry rubs are a key player in the world of great barbecue. It’s where you add flavor and also lay the groundwork for what will become the crust—that sweet-burned-so-good, sticky-yet-crunchy element that barbecue fanatics hunt for.

When making huge quantities of a dry spice rub, one little change can drastically alter the recipe—and success—of your barbecue.

This was something Barbato took to heart. After his team crafted the perfect rub—it includes brown sugar, ancho chile powder and paprika—he turned over the production to someone outside the team.

During a meeting with a local meat supplier, Barbato and his team were introduced to a manufacturer who said he could make the rub for them in 5-pound tubs, ensuring that the ratio of spices would be perfect for every piece of meat.

This is a tactic that worked well for Burke at UT, as well.

“It’s a high-volume thing,” he says. “You may have a cook weigh the peppercorn wrong and that can ruin the whole recipe.” So he also gets an outside source to make the rub in big quantities. “It’s just easier,” he adds.

Another possible consistency issue is in the actual barbecuing of the meat. Everybody knows it’s low and slow. But it’s a good idea to take advantage of the new technologies in barbecue equipment that can make sure it’s exactly low enough and exactly slow enough.

The barbecue station at the University of Georgia’s new Bolton Dining Commons is nothing short of beloved by students and staff alike. A smoker faces the station, acting as a piece of display cooking magic and also as a holding container for the meat.

“The cooks are all trained on it and the chef trains the staff,” says Bryan Varin, interim executive director. “We use standardized recipes and prescribed measures. It takes a little training, but it’s quite a simple set up and easy to use. We’ll load it at 8 or 9 at night before we go home, and it cooks low and slow overnight.”

Back at Lambeau Field, a smoker in a central commissary handles 800 pounds of meat at a time, for up to 12 hours at a stretch. It’s run on electricity but uses wood chips for flavor. Barbato views consistency as one of the most important elements of barbecue, and says it can be tricky when it’s done at this volume. That’s where he says this smoker, which is programmable and is set on a timer, is a valuable tool.

“A lot of people are season ticket holders, and I want them to get the same brisket every time,” Barbato says.

Barbecue sauce is made in house, in 80-gallon kettles, and Barbato found a combination of flavors that the people of Wisconsin really seem to like.
The sauce is “somewhere between North Carolina and Kansas City,” sweeter but with a vinegary edge.