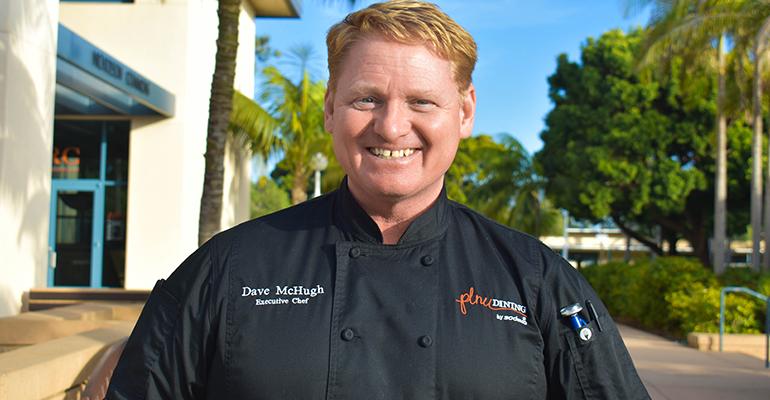 Chef Dave McHugh shares his tips for infusing menus with fresh perspectives, staying sharp on a personal and professional level and creating a “mental mise” each day to take care of business and stay on top of the unexpected. Plus, the one question he uses to take the mental temperature of his crew.

It’s times like this that looking at the big picture can be the perspective shift needed to move forward. Looking at the big picture is what drives Executive Chef Dave McHugh in his work at Point Loma Nazarene University. The Southern California school is currently shut down for the coronavirus pandemic, and the folks there are dealing with “day-to-day, hour-to-hour adjustments,” McHugh says, by “communicating constantly while balancing out the needs and safety of the staff as well.”

McHugh, who grew up in the Rochester, N.Y., area, has lived and worked in California for decades now, gathering chef/leadership experience at San Diego State University, San Diego University and Sea World. He started at Point Loma to lead the Sodexo team there last year.

Related: Aramark’s Executive Chef Matt Horn at the University of Minnesota on developing menus, chasing trends and giving the culinary team its due

When he thinks “big picture,” in terms of culinary development, menus and the culinary face of the college, McHugh admits that his first thought is “absolute perfection!”

“From perfectly ripe and fresh food to proper temperatures and serviceware…accurate culinary themes and correct menu nomenclature,” he says. “These days, the entertainment aspect of dining…the atmosphere and ‘the show’ are equally important as the food and the service.”

But his years of experience in real-life kitchens of real-life large-scale foodservice operations have tempered that quest for perfection with a dash of pragmatism. Just a dash, though. Mainly, his philosophy, he says, is to “not let perfect be the enemy of better.’”

He stays organized with a system he’s created in his own head called “mental mise.”

“Always do everything you know you need to do, so that when the unexpected happens, you’ll have time to address that,” McHugh says. “Being mentally, physically and spiritually fit is essential to remaining sharp. Be on your game at all times and recognize that your every move is being observed.”

While that may sound a bit like paranoia, it’s actually a heightened sense of awareness that can serve any chef well. McHugh knows the eyes (and taste buds) of the campus are on him when he’s developing new menus and rolling out new concepts. Currently, he’s thinking about “fresh, garden-direct foods,” he says. “It’s now an era where we circle back to fundamentals. What makes food great? When each ingredient is perfect and contributes as such.”

When developing new menus, McHugh considers food trends and budgets, but first at the season, an element that’s not always as obvious in Southern California’s perfect climate. “I grew up in the midst of lakes and rivers and acres of apple farms and real weather,” he laments. But he finds ways to add seasonality in more subtle ways, and often with a dash of classical French cooking technique, a bedrock he returns to again and again, embellished by his own blend of hyper-fresh California-coastal cuisine.

He works with a team that’s been there a lot longer than he has, and that presents its own challenges, making it key to take the temperature of morale regularly.

“The best [executive] chef is everything to everyone,” he says. “Providing the tools and information and the best ingredients to do a great job. The best chefs are less concerned with the process of staff getting from A to B and more focused on crew chemistry and results.”

That “crew chemistry” is something McHugh measures with one simple question, something he learned from an old boss.

“I used to have a chef who would ask each employee, “Are you happy?” and would listen intently to each answer,” he says. “It took me a long time to recognize those answers are all you need to know. If your team is happy, they have all their tools to shine.”

McHugh’s advice to those starting out in the culinary field is to have the same attitude that’s informing his upbeat demeanor right now.

“Never say ‘no’ to any opportunity or challenge,” he says. “Greet objectives with an emphatic ‘yes!’ and watch how many doors will open for you.”