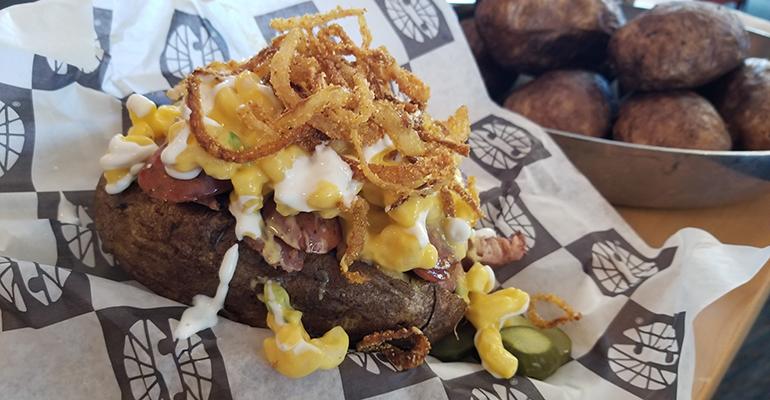 Texas Motor Speedway near Ft. Worth is hog heaven. Literally. It’s been that way since 2013, when concessions company Levy Restaurants unveiled its Hawg Heaven line of pork-centric culinary enormities at the venue, which hosts a series of high-profile motor races throughout the year.

What is the Taternater? You may be sorry you asked, because what we have here is “a potato of prodigious proportions” (that’s the wording in Levy’s official press release) that is packed with a pound and a half mix of barbecue pulled pork, brisket and hickory black pepper sausage covered with a creamy/spicy bacon jalapeno mac ’n cheese and a creamy bacon gravy, then topped with a helping of onion crisps to add some crunch.

"This will surely ‘starch’ the engines of our race fans," quipps Levy Executive Chef Lincoln Engstrom, the culinary mad scientist who created Taternater. "The Hawg Heaven Taternater is the perfect fall feast for our race-starved fans that have been waiting six months for NASCAR to return to Texas Motor Speedway."

Other Hawg Heaven concessions items since the line’s debut in 2013 have included:

·      Queso Wings: Oversized chicken drumettes doused in a bacon queso sauce and topped with a mixture of crumbled Doritos and bacon bits;

·      The BLT: Four slices of thick-cut soy black pepper candied bacon, two thick slices of tomato and a healthy handful of leafy greens piled onto corn-dusted jalapeño bread that is coated with a sriracha mayo and branded with the Texas Motor Speedway logo.