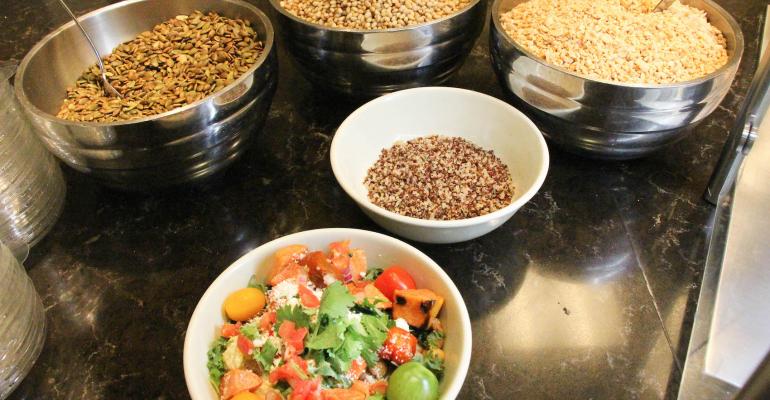 <p>The new [email protected] James station at Vanderbilt is based on super-healthy grains as the basis of customized one-bowl dishes.</p>
Food & Beverage

The station allows students to build from a base of quinoa blend, black barley or freekeh, with a choice of proteins, toppings and sauces.

Vanderbilt University’s campus dining is combining three of the hottest trends into one new concept: bowls, grains and customization.

[email protected] James is a new lunchtime concept that gives customers the opportunity to build customized one-bowl meals starting with a basis of premium grains like quinoa blend, black barley or freekeh, and then adding chicken, steak or a veggie mix and finishing it off from a selection of over a dozen toppings ranging from spiced red or black beans, toasted sweet potato and grilled lime wedges to avocado, kale and arugula.

“The main thrust behind the development of the concept was to have something that is customizable, healthy and very flavorful all at the same time,” says Bill Claypool, assistant director and executive chef for Vanderbilt Campus Dining.

It all sounds outrageously healthy, and has certainly caught the student body’s attention.

“The lines are incredible,” says Claypool. “They’re backed out into the dining room. We’re putting through about 30 people every 10 minutes, so throughput’s pretty quick,” which is quite impressive for a concept based totally on customization. The station has also attracted a fair number of faculty and staff.

[email protected] James is part of the Chef James Bistro at Vaderbilt’s Rand Dining Hall, which is located near the heart of the school’s academic core.

“Most of the students are in [the area] at lunchtime and a lot of them have tight turnarounds, so it’s a great convenient place for them to eat,” Claypool says.

[email protected] James operates only at midday, from 11 a.m. to 3 p.m. during the week, though Claypool says those may be extended at some point.

The space was formerly occupied by a cold station offering composed and green salads and chilled proteins that was “fairly popular, but it had started to wane over the last year or two, so we changed out some equipment and the serving cabinetry on the line but it’s still the same footprint,” Claypool says.

The new concept has taken some business from some of the other stations in Rand but overall the venue is seeing about 250 to 300 more swipes a day in the early going than it had last year, according to Claypool.

The bowls are $6.99 cash and cost one entrée swipe on Vanderbilt’s meal plan.

“Most just think of it as their entrée on the meal plan,” Claypool observes, so they can add three sides (including a beverage) to make a meal.

As for the station’s quick popularity, “It doesn’t take students any time to sniff out a new concept,” he laughs. “The first day there was kind of a line, the second day a substantial line and the third day a kind of crazy line.”

A tour of Vanderbilt’s Kitchen and Market at Kissam
Jul 12, 2016