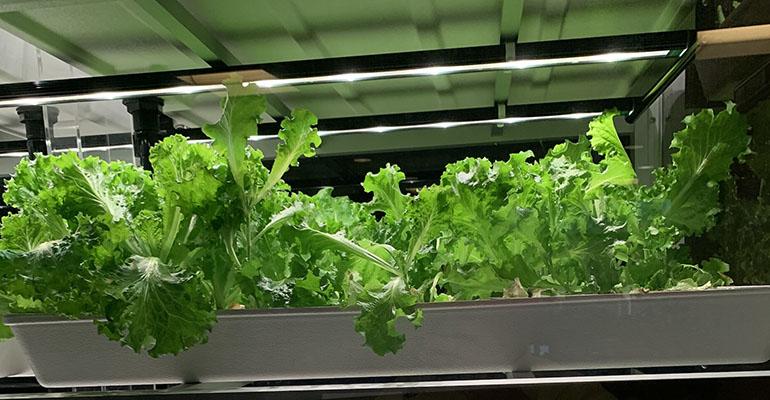 Centra Lynchburg General Hospital installed a micro-farm unit from vendor Babylon in its cafeteria last November and has already harvested about a hundred pounds of lettuce, primarily for use on its salad bar.

Two hydroponic micro-farm units from vendor Babylon installed in the cafeteria of Centra Lynchburg General Hospital in Virginia have already produced about a hundred pounds of lettuce for use in the salad bar and on patient meal trays. The apparatuses put in the second week of November last year are a high-profile sign of the hospital’s commitment to healthy, fresh food, as the cafeteria is located just off the heavily trafficked main lobby of the facility. 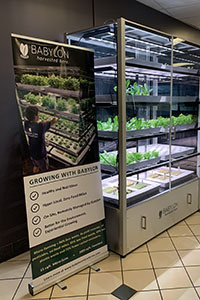 Photo: Signage explains what the micro-farms in the Centra Lynchburg Hospital cafeteria are and why they are important.

“Everything grows at its own rate, so [while] we’re growing equal amounts of green leaf, romaine, spring mix, bib and red butter lettuce, they have different harvest times—green leaf takes a little longer while spring mix only takes a couple weeks, for example—so there’s times we get more of one kind than another,” Schoonmaker explains. “We always have new [plantings] going in, so it just depends on where each is in its growing cycle.”

Centra Lynchburg is the first hospital client for Babylon, and it came about by chance, Schoonmaker says. “I happened to run into one of my former produce reps who had moved on to Babylon and we got to talking. The next thing you know, we had put together a proposal.”

In addition to the lettuces, the Babylon micro-farm units can produce herbs and edible flowers, but neither is being grown currently at Centra Lynchburg because edible flowers may be too exotic for the venue and the hospital already grows its own herbs in its outdoor garden, which produces cilantro, rosemary, parsley, mint and basil along with more substantial crops in season such as peaches, squash, cherry tomatoes, jalapeno and green bell peppers.

The outdoor gardens are maintained by Schoonmaker and some of his managers, but Schoonmaker alone takes care of the indoor micro-garden with the help of some high technology.

“I have an app to monitor it that’s pretty user-friendly,” he explains. “Babylon sends us seed packs and all I have to do is put them in the farm. Everything is scanned in [when it’s planted] so I know when it’s to be harvested, [as well as] water and nutrient levels, if lights are working [and so forth].”

After a crop is harvested, Schoonmaker logs it, then turns it over to his kitchen staff, who does the washing and chopping. Most of the bounty is slated for the cafeteria salad bar, but some spring mix also has wound up on patient trays.

“I also have a special crop reserved for a salad for a board of directors dinner at end of [January], so they can taste and see it,” he adds.

A typical crop will generally be used in a couple of days. The 60 pounds of lettuce Schoonmaker says he harvested on New Year’s Day was used up by the 3rd, he notes.

Customer reaction has been extremely positive, he adds.

“I’ve had lot of comments saying they can taste the difference, that there’s a fresh, crisp taste to the lettuce,” he says. “Of course, there’s also the health value and since we control it, there’s no worry about the lettuce getting a recall.”