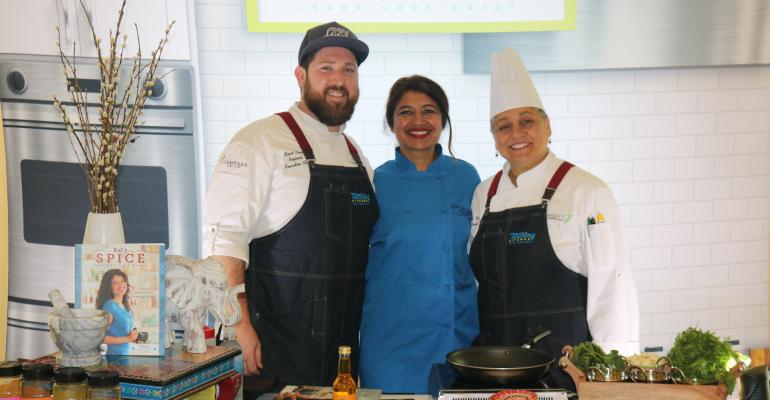 Through Morrison Healthcare’s Teaching Kitchen program, the TV star and cookbook author shares her secrets for No Butter Chicken, mango lassi and more.

Indian food, it turns out, checks a lot of boxes for healthcare dining. “It brings a wide range of flavorful spices, stealth health and the wellness that our guests are looking for,” says Lucas Cavin, regional executive chef with Morrison Healthcare. Indian food can also be made vegetarian without missing a beat (or any flavor) and has elements that can be swapped out for an even healthier choice (hello, brown rice). In addition, many of the spices used in Indian food, like turmeric, are known for their wellness-boosting properties.

Throughout the year, celebrity chef Bal Arneson has been teaching the spicy power of Indian food at several Morrison Healthcare accounts from coast to coast as part of Morrison’s Teaching Kitchen program. Many Teaching Kitchens are hosted by the account chef and dietitian, but celebrity chefs make appearances here and there.

Arneson, a native of India, is passionate about simple, healthy Indian recipes. She has authored several best-selling cookbooks, including “Everyday Indian,” “Bal’s Quick and Healthy Indian” and “Bal’s Spice Kitchen.” Her Teaching Kitchen events with Morrison have gotten the culinary staff excited about the flavor-forward world of Indian cuisine and also gets customers buzzing about all that flavor. 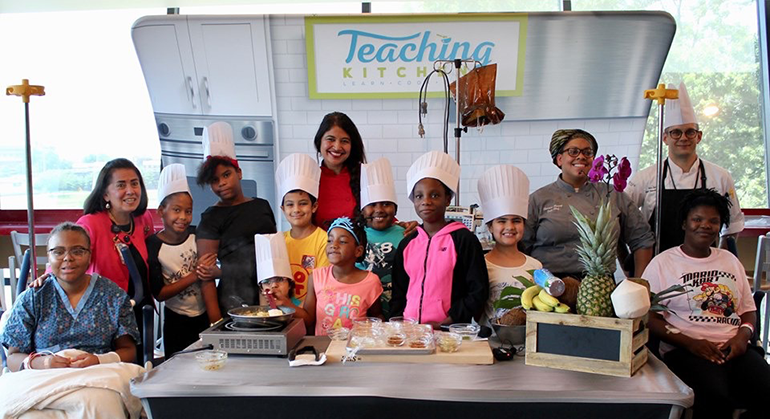 “This Teaching Kitchen included two demonstrations: a spice blending activity and a cooking demonstration,” Cavin says. Participants mixed nine essential Indian spices together to create a blend they could take home. In the cooking demo, Arneson showed the group how to make No Butter Chicken, one of her signature dishes.

As the name suggests, no butter is used in her version of this classic Indian dish, making it healthier for hospital use. Arneson adds richness to the dish by stirring in plain yogurt just before serving, after aromatics and spices have been cooked down with tomato paste and chicken is added. She served it with brown rice—also healthier—with edamame. The in-house team also worked with Arneson on a big batch of mango lassi, one of India’s best-loved beverages.

“After Chef Bal’s demonstration, there was an overwhelming positive response from the participants and guests, so we’re looking to add more Indian offerings in the cafes,” Cavin says.

Currently, Arneson’s No Butter Chicken is offered at the hospital, along with tikka masala, dal, curried sweet potatoes and cauliflower and samosas with different sauces and chutneys to mix and match.

The element of Indian cooking that impresses Cavin most as a chef, he says, is the spices, particularly the layering of the spices, “from grinding spices to toasting seeds to bring out the full flavor and aromatics of the spice.”