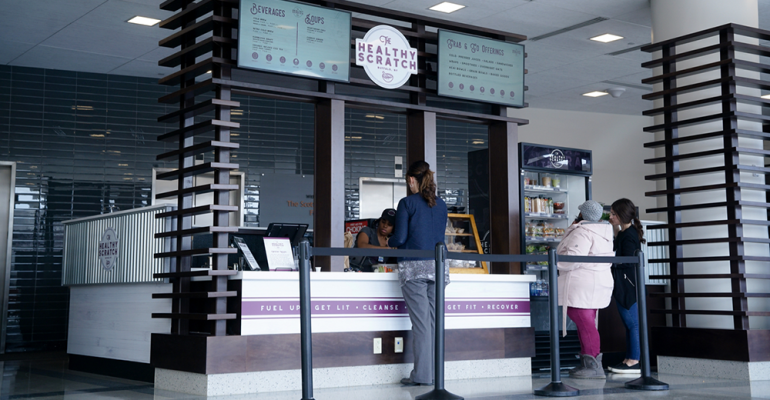 Fruits, vegetables and whole grains get top billing on the menu at the Healthy Scratch Café at the Roswell Park Comprehensive Cancer Center in Buffalo.

Kim and Terry Pegula are prominent figures in Buffalo as their family owns the city’s Buffalo Bills NFL franchise and Buffalo Sabres NHL franchise. They are also restaurateurs who opened their first café, the Healthy Scratch, two years ago in a venue called the Shops at Harbor Center, an entertainment/hospitality complex that sits next to the Key Bank Center arena where the Sabres play home games.

That is just a short way from their second Healthy Scratch unit, which debuted this spring in the lobby of the Scott Bieler Clinical Science Center building of the Roswell Park Comprehensive Cancer Center, and serves the patients, visitors and staff of that medical complex with a menu that is heavily tilted to featuring “clean” foods shown to have cancer-fighting qualities.

“We had expanded the clinical center to include the [Bieler] science center in 2016 and wanted to have some kind of foodservice in the lobby,” explains Dr. Mary Reid, director of cancer screening and survivorship for Roswell Park. While there is a more traditional cafeteria in Roswell Park’s main hospital nearby, “patients definitely expressed the desire to have food available in the new space where it’s convenient,” Reid notes.

But convenience wasn’t the only expectation, she adds.

“The trend, especially with the millennial generation now coming into the years when some of them are starting to get cancer, [is toward] a much greater awareness of whole foods that are healthier options, and Healthy Scratch fit perfectly into those requests.”

In addition, Reid explains, “patients who survive cancer and get through treatment are very interested in ways to use nutrition to prevent their cancer from coming back.”

“People also love the smoothies, which we make from scratch,” he adds. These also have the benefit of being easier to consume form patients with chewing and swallowing difficulties and for those undergoing treatments like radiation and chemo therapy who may have trouble with whole foods.

“It’s a way to get fruits, vegetables and even proteins like yogurt and protein powder into them in a way they can better tolerate,” offers Linda Leising, senior clinical dietitian at Roswell Park.

Nutrition strategy that helps fight cancer involves whole foods consumed in variety rather than a “magic bullet” approach, adds Leising. “We know based on [current research] that there is not one single food that can help somebody rehabilitate or help prevent cancer from occurring, nor is there one nutrient, which is why we promote food that is healthy for people rather than supplements. It’s not possible for someone to reap the benefits of a multitude of plant-based foods that offer extensive phytochemicals, nutrients and fiber as opposed to a specific nutrient in a pill. You can’t replicate what Mother Nature has created for us, and it’s the synergy of those foods together that are preventative.”

In addition to the salads, wraps and sandwiches, some of which is made in the Harbor Center flagship location, the Roswell Park Healthy Scratch unit menus grain bowls, bottled beverages, tea and coffee—including a popular cold brew version—and Healthy Scratch’s custom line of cold-pressed juices.

In addition to its main role as a foodservice outlet, the café also serves as a kind of educational platform by demonstrating various cancer-fighting dishes and introducing customers to things they may not have tried before, Reid notes.

“It gives them a chance to experiment,” she says. “We’ve found that a lot of times people want to try different things and if it’s available they give it a try in a place like this while they may not seek it out when they go [grocery] shopping.”

It’s a soft-sell complement to the more formal educational sessions patients receive on healthy diets and nutrition, she adds.

“No one is forced to change their diet, but we’re doing everything we can to support them as they begin to be treated for cancer to fight against the side effects of treatment through diet and also to use good nutrition as they start to rehabilitate and go forward with the rest of their lives and keep cancer from coming back.”

Heins says the Roswell Park unit of Healthy Scratch has become quite popular since it opened, with traffic consisting not only of the building’s patients and staff but increasingly also of customers coming over from the surrounding complex.

“The Buffalo Niagara medical campus [of which Roswell Park is a part] is growing quite a bit, and we’ve found that people are very appreciative of [having] healthy options available that they can use within their diets. So for us to be able to open a café here that focuses on those things is something that has drawn a lot of interest.”

FM On Demand: UNC Health goes around the world and shares tips for cooking with plantains
Feb 25, 2021