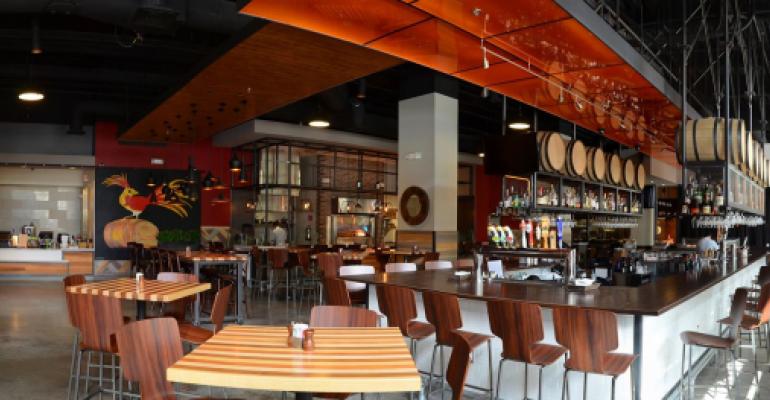 Located inside a St. Louis hospital, Central Table has evolved from a food hall to a full-service restaurant and bar with aspirations to change the healthcare foodservice industry.

When it opened in 2013, Central Table was St. Louis’ first taste of the national food hall trend—more Mario Batali’s Eataly than food court—a 10,000-square-foot space, taking up almost a city block on the first floor of Barnes-Jewish Hospital, with different concepts and a “something for everyone” vibe.

Now, it’s become more of a full-service restaurant that’s focused on local foods, sustainability, and being a local community gathering spot complete with cheffy menu selections, handcrafted cocktails and event space that invites the neighborhood inside.

“It needed to be more than a food hall,” says Cary Neff, vice president, corporate culinary support for Morrison Healthcare, which manages the foodservice at Barnes. “It’s focusing more on farm fresh foods and being more of a neighborhood restaurant that’s engaging the community and setting new standards.”

Today, from-scratch selections are prepared in an open kitchen, and for an even more intimate experience, the semi-private Chef’s Grill area allows for up to 40 guests to get up close and personal with the food preparation.

Under the direction of Chef Ray Carpenter, Central Table offers a seasonal menu throughout the dayparts that serves hospital staff, visitors and walk-in traffic. And the menu is definitely designed to wow.

In the morning, the café offers such items as fresh beignets, Kaldi’s roasted coffee, housemade pastries and blueberry-honey-ricotta toast. At lunchtime, oven-fired pizzas, super fresh salads and housemade soups are the focus. Dinnertime is elegant and candlelit, and has “Yelpers” posting very positive reviews, with barely a mention that this is, in fact, a hospital cafeteria.

“The restaurant and bar has come a long way from its food hall origins, becoming a part of and listening to the voice of the Central West End community where it resides,” Carpenter says.

Neff adds: “Ray Carpenter is providing that entrepreneur mindset of innovation and really making a statement inside the St. Louis restaurant community.”

Part of that statement is Bar Paradigm, situated right in the middle of the restaurant. The bar boasts an affordable wine list and handcrafted cocktails shaken to order, such a big trend right now and obviously unusual for healthcare foodservice. Since it’s located in St. Louis, the bar features a lot of Anheuser-Busch selections on the 20 taps of beer. Happy hour begins at 2 p.m., and the bar is branded as a stand-alone concept with a nationally known bartender, Joshua Johnson.

Fresh produce from local purveyors shapes the seasonal menu, and collaborations with area chefs are happening more and more. Currently, Carpenter is working with St. Louis chef Qui Tran of Mai Lee Restaurant. The two are developing a masterful mash-up of a pizza with peanut sauce, ginger beef, mozzarella, jalapeno and pickled veggies, all drizzled with chili oil.

The culinary innovations are meant to represent the diversity of St. Louis’ neighborhoods, and to serve as a backdrop for civic groups in the Central West End area to come together.

“Every Monday, there is an ‘industry night’ for people in the foodservice industry to exchange ideas,” Neff says. “We’ll have mixologists, for example, sharing their recipes. People who typically compete…this is a central communion, really.”

In addition, a Chef’s Table can be reserved for groups to enjoy a special chef’s menu. There’s also the West End Room, available for groups up to 24, which  features woodblock tables, a view of the wine selection and setups for wifi and audio-visual presentations.

Central Table’s mission includes giving back to the community as well, with additional revenue being funneled to a food bank.

“We are constantly thinking about how we can reach back to people who are underserved in terms of employment and people who are living in food deserts,” Neff says. “We need neighborhood hubs like this, and apprenticeship programs to have that conversation.”

Neff adds that the fact this is a hospital foodservice operation could lead to similar projects around the country.

“We are looking at ourselves as healthcare foodservice contractors,” he says. “Years ago, my job didn’t even exist. You didn’t have chefs; you had dietitians creating menus ordered by doctors and you had production managers from cafes.”

Central Table turns that model on its head by beginning with real food and farmers, and going from there.

“That can challenge the entire industry,” Neff says. “We are turning our cafes into restaurants and providing training so we can compete with any restaurateur in the country.”