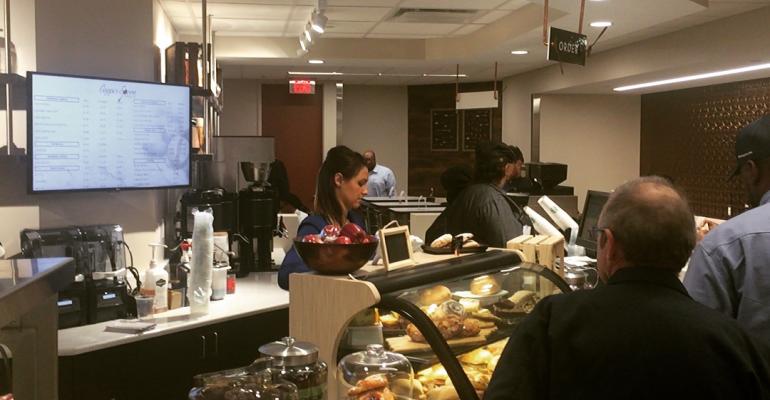 Customization, convenience, wellness issues, extended hours, customer preferences for authenticity and variety. These are all factors driving changes in how foodservices are provided in hospital settings.

Many of these priorities are incorporated into Copper Spoon Coffee Co., a coffee shop concept recently introduced by Morrison Healthcare, a unit of Compass Group USA that operates at some 600 hospitals and healthcare systems nationally.

Copper Spoon offers a recognizable branded coffee—generally Starbucks though the concept is flexible—as its basis and adds a customized food menu that includes both packaged grab-and-go selections made onsite in the production kitchen and a basic to-order hot food component such as pressed sandwiches or paninis.

The concept debuted earlier this year at Methodist University Hospital of Memphis, where it replaced an underperforming coffee shop that had been generating about $350,000 a year in sales. Copper Spoon is on track to triple that, according to Kevin Dorr, Morrison’s vice president of retail solutions, who oversaw the development of Copper Spoon.

The Methodist-Memphis unit is located near the front entrance lobby in a space that was an admissions desk before a renovation two years ago.

“It was an underutilized space that was central to our lobby and near the elevators and front door—really a perfect location,” says William Keith, vice president of support & professional services at Methodist-Memphis.

The unit is open round the clock and, as it is across campus from the cafeteria, it provides a convenient dining space even when both are open. It is also near the patient care units, the emergency waiting room and the facility’s Family Care Center, where families regularly stay overnight, notes Keith. “It is available for them as well as for our staff and physicians who are there 24/7 and have needs for food throughout the night,” he says.

The food menu emphasizes breakfast items in the morning—a bagel topped with smoked salmon and Gouda cheese is especially popular—and transitions to a sandwich/soup/salad mix around 11 a.m. Pastries are also available all day. Customer counts currently average 1,363 during the day and an additional 90 overnight between 10 p.m. and 6 a.m.

“We have lots of coffee shops across our company, and sometimes they were built simply out of necessity and are a little bit generic,” Dorr notes in explaining the market niche Copper Spoon was designed to enhance. “People these days expect much more of an authentic experience. Starbucks has clearly set the bar, that we’re not selling coffee but an experience. So we felt we needed to elevate our locations from a generic coffee experience to something a little more real.”

Dorr said he also wanted the concept to have more of a food focus than traditional coffee shops. “Instead of just some pastries and muffins, these units can serve a third shift or after-hours staff when the cafeteria has closed,” he notes, adding that the extended hours opportunity also “lets us take further advantage of the talents of our chefs.”

Because it is not restricted by a chain’s proprietary requirements, the concept can also adapt its food program to regional or local tastes more flexibly. “What works in New York City doesn’t work in Nashville, Tenn.,” Dorr notes.

He says special attention was paid to décor because of that need to satisfy the “experience” factor. “The setting is every bit as important as the food and coffee. We’ve always served good coffee and food, but it’s the feeling you have in the space, and the décor and the uniform package, all those intangibles that bring this to an elevated experience.”

“Many times the coffee shop is the first impression of food and service in a hospital. It may be in the lobby at the front door so having a real experience there is critical to setting the tone.”

Copper Spoon had been in development for some nine months before its rollout at Methodist-Memphis, “but it’s never really complete,” Dorr laughs. “We always listen to customers to see how we can make it better.”

The concept is flexible in terms of space requirements, ranging from a basic open kiosk platform to different sizes of enclosed spaces.

A second Copper Spoon unit is expected to open at a hospital site in Virginia by mid-summer followed by one in Detroit and another site in Memphis. Another 10 sites are in the discussion phase, including an especially large unit in a “beautiful space” at the University of Miami Hospital that will be open to the public, Dorr says. That one will specialize in Cuban-style coffees and sandwiches, reflecting the adaptability of the concept to regional preferences.

Dorr expects as many as 50 units to open eventually across the Morrison hospital clientele.

“I would argue that the future of retail [in hospital settings] is smaller spaces more spread out rather than giant cafeterias,” Dorr offers. “People look for different experiences throughout the hospital because they may not want to get into the big mad rush at high noon in the cafeteria. They’d rather quietly sit and read, make a phone call and have a cup of coffee and a quiche in the morning or a power bowl or grain salad in the afternoon to give them a little energy. It’s high-intensity work these folks are doing.”