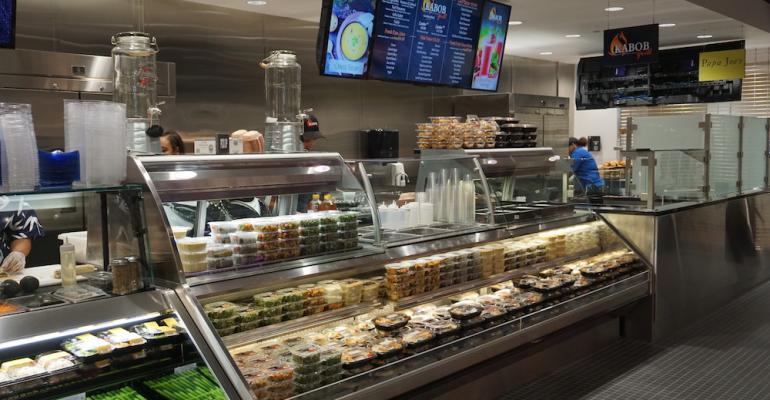 Staff and visitors to Detroit Medical Center (DMC), as well as some nearby colleges, now have a spectacular new venue in which to dine, thanks to the venerable healthcare institution’s partnership with Papa Joe’s Gourmet Market & Catering, a locally based retailer of fresh and exotic raw and prepared foods.

The project is opening in four phases.

The first, consisting of a branded Starbucks station, opened last December and was followed in March by phase two, which saw the simultaneous debuts of four more stations: Sukothai (Thai cuisine), Burger Bar Detroit, Chiqui’s Mexican and Estia Greek Street Food. These are all local brands with which Papa Joe’s has had an ongoing partnership.

Phase three, which opened this past week, centers around the company’s own Papa Joe’s Gourmet Foods concept, a multiplatform prepared food counter which offers eight soups a day along with freshly prepared sandwiches, fresh sushi made onsite, whole and precut fresh fruits and vegetables for grab and go, as well as fresh fruit juices.

The soups and sandwiches are prepared and the produce washed, cut and packaged in Papa Joe’s commissary kitchen in nearby Rochester Hills, site of the company’s 58,000-square-foot flagship retail emporium, which delivers fresh product daily to the company’s various retail sites. It even makes the meats used in the sandwiches from scratch, says company co-owner Tony Curtis.

“We don’t use lunch meat in our sandwiches,” he stresses. “We cook fresh product. Our corned beef is cooked fresh so you’re not getting the preservatives, the salt and so forth and we can pretty much tailor a nutritional diet for just about anybody.”

Phase three of the DMC food plaza’s unveiling also saw the opening of a Kabob Grill station that specializes in halal-certified Middle Eastern foods ranging from kefta and shawarma to hummus and tabbouleh, as well as a branded Menchie’s Frozen Yogurt unit.

The final phase of the rollout is scheduled for this summer and will see the opening of a unit of the locally noted Bigalora Wood Fired Cucina concept, which specializes in high-quality Italian dishes like pizzas and pastas.

“These are healthy pizzas,” Curtis emphasizes. “This is not your typical pizza. The doughs are all made with natural starters.”

DMC is not Papa Joe’s first foray into a healthcare environment. Six years ago the company opened a much more modest venue at Beaumont Hospital in Royal Oak, Mich. “It was something we did to try and see what would be the response from the employees, and it was overwhelming,” Curtis says.

That led to discussions with other hospitals and, eventually, the deal with DMC, which allocated the space previously used for offices. The two entities split the cost of the construction, with Papa Joe’s kicking in about $4.5 million of the $8.2 million total.

So far it’s been paying off with some 10,000 visitors a day even before the phase three venues opened, Curtis notes, adding that almost all of it so far is in-house traffic from the medical center. However, the venue is open to the public and will be promoted to the surrounding community, which should add to the transaction counts down the line.

“We partnered with the hospital about a year ago to provide foodservice above and beyond what you typically see in a hospital,” Curtis explains. “This way the hospital can focus on taking care of the patients and the patients’ food where they have to have stricter diets. Meanwhile, we focus on the healthcare workers and staff as well as the people who live in the community.

“I think it is the right direction now, where hospitals should be going, towards healthy product, healthy foods and more interesting quality foods,” he offers.