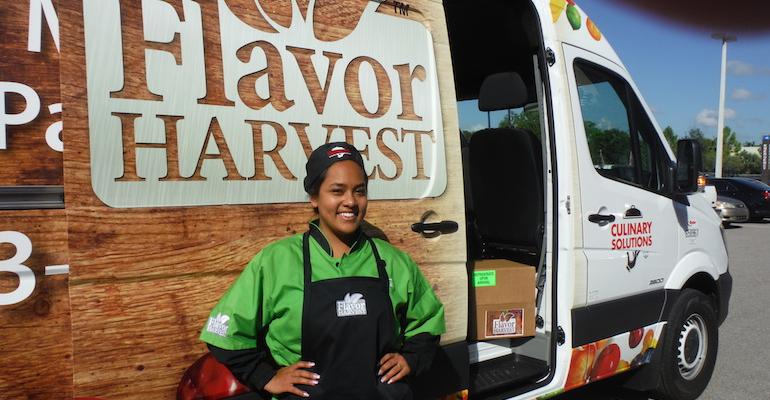 <p>One of the drivers who delivers home meals to recently discharged patients of Lee Memorial Health. She will also check up on each client while making the drop and report back to the operating manager if there is any cause for concern that needs to be followed up.</p>
News & Trends>Healthcare

The program was successful enough in reducing readmission rates among those participating that it has been expanded this year, nearly doubling the number of clients it serves.

The meals are delivered once a week by drivers who also check in on the clients. They are made especially for the Flavor Harvest program at the LeeSar central production operation that serves Lee Memorial and several other hospital systems with efficient consolidated bulk meal production.

“We control transportation and distribution to the doorstep, and our drivers actually go in and assist the family member with storage and then they review the cooking instructions,” explains Larry Altier, system director of food & nutrition services for Lee Memorial. “And if they see something in the interaction with the client that gives them cause for concern, they’ll report that back to the operating manager who’s a dietitian and she will coordinate with home health or anyone else who may need to be involved.”

That’s unusual, but the more important thing, Altier emphasizes, is that the drivers “try to create an aura of socialization and assistance to help the client get established because, in many of the cases, the clients struggle just to be able to put the product into the refrigerator.”

While most are elderly—the average age in the pilot was 72—the criteria for inclusion in Flavor Harvest are clinical, not age or socio-economic status. A contributing factor is the dearth of other options such as Meals on Wheels. Altier says there are some 1,500 on waiting lists in Lee County—and that’s just those aware of how to apply for Meals on Wheels assistance.

“What we recognized in the initial start of the program was that these patients upon discharge were struggling to find the most basic need, which is nutrition. And we were getting that same message from our home health department and our case managers had asked us on a couple prior occasions if there was anything we could do, which we did, but it led us to dig in a little deeper.”

The hospital hired a dedicated dietitian to oversee Flavor Harvest, which uses recipes developed in tandem between dietitians and chefs at LeeSar. The facility had already been producing meals for senior living programs and had supplied one senior living community with meals for six months while its kitchens were being renovated.

The four-week cycle menu is a based on the medical condition of each client. Dishes, which tend toward the traditional given the client base, include quiche, pasta and plenty of fresh fruits and vegetables.

The program was piloted for six months from April to October 2014 at the system’s Cape Coral Hospital, feeding 59 former patients. When the data was analyzed, it showed that readmission rate among the group was 17 percent as opposed to 28 percent among patients with similar conditions, including cardiopulmonary disease, congestive heart failure, pneumonia and myocardial infarction. In addition, length of stay dropped from 10.24 to seven days.

The analysis also estimated that full deployment of the program systemwide would have a positive annual net financial impact, after costs, of $1.5 million.

“They derived that through reduction in readmission value, length-of-stay reduction as well as the coding of the diagnosis condition due to the clinical criteria program that we use,” Altier explains.

Those encouraging results, which mirrored other national studies, prompted a full ramp up at Cape Coral beginning this past spring and a subsequent expansion to Gulf Coast Medical Center.

“If it proves to be as economically valuable to the system that we believe it is, then we would expand to the full system,” Altier says, but he cautions that data from this year’s operations is still being analyzed.

The program is currently being funded by grants from Bank of America and The Allen Foundation.

“Ultimately, long term” Altier says, “the health system will support it one way or another, either through secured reimbursements from grants and such or outright support.”

But, he adds, “ it comes down to fiscal value: does it really return to the system a value, not only quantitatively but on the qualitative side. Those patients who are most at risk are the ones we are serving, and in many cases the psychological value of providing them with meals and having them not worry about that issue for that time period post discharge when they are recovering and in a critical state is really positive and has been a huge factor in influencing whether or not we extend the program.”