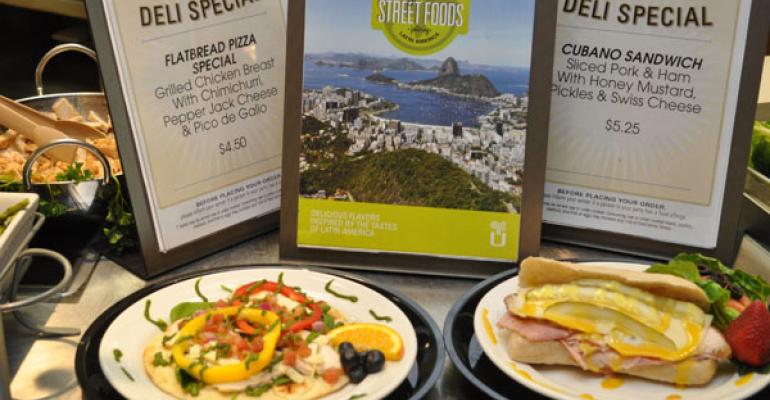 Natalie Ramos didn’t want your run-of-the-mill international food promotion for the café at Fauquier Hospital, a 97-bed facility in Warrenton, VA. She wanted to take a detour into the side streets of Latin America, Asia, Mexico and Greece.

The result is Street Fair Fridays, where Ramos, director of food and nutrition services, Unidine Corp., says customers are regularly immersing themselves in variations on world foods like a Japanese-style shrimp burger or chicken tandoori sandwiches.

“We choose a different region of the world every month,” Ramos says. “Instead of the dishes everyone knows, we offer foods that fall more into the street food category. The things you’d find if you visited these countries. People are really interested in it. You don’t see this kind of food everywhere in the middle of Virginia.”

Health is obviously an important part of everyday menu planning in the café, and the world street food selections work really well to this end: grain salads, burgers made with shrimp or chicken and vegetarian dishes keep things light.

Each station in the cafe—while still offering regular deli, salad and hot line items—is set up with one ‘street fair’ item so customers can get a taste of say, carved pork at one, and enchiladas at another. Check out some of the menu items offered on Street Fair Fridays:

One dish served on the Latin-themed Fridays is a flatbread that takes an unexpected turn: the Grilled Chicken Breast with Chimichurri, Pepper-Jack Cheese and Pico de Gallo (at right). The Pepper-Jack and Pico de Gallo are clearly in Mexican if not Tex Mex territory, while the Chimichurri is straight from South America. It’s the go-to sauce in Argentina, Nicaragua and Uruguay. Made like a pesto with parsley, garlic, olive oil, oregano and white or red wine vinegar, the flavors are in-your-face (in a good way)

Spice-fragranced dishes from India include shrimp skewered on kebobs and served with grilled naan (bread) and ‘pocket snack’ style Indian lamb samosas with curried lentils. Chicken tandoori sandwiches are another good mobile option, as is a bowl of mixed vegetable curry with cilantro-cumin Basmati rice.

Many Indian dishes are meatless, making this a good country to visit if your customers tend to be flexitarian, vegetarian or vegan.

Anyone who’s seen the Travel Channel or the Cooking Channel lately knows that Asia is one of the best places on earth to get street food. The region is well represented on Street Fair Fridays. Check out these Asian-fusion creations that customers can choose from: