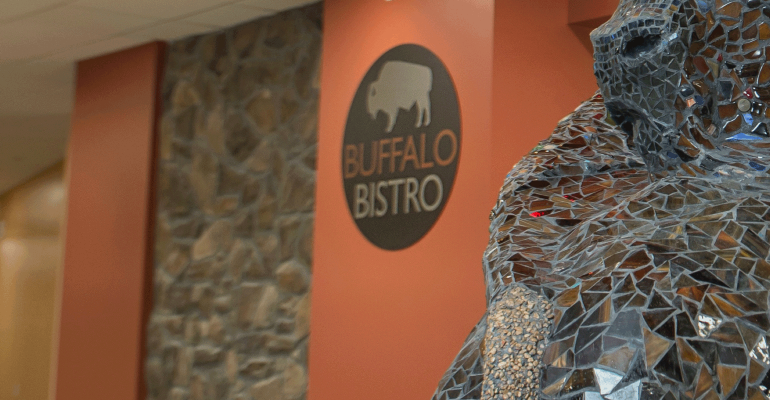 Hospital cafe gives diners what they like, from price to food quality

West Park Hospital’s Buffalo Bistro is drawing customers from both on- and off-site.

The Buffalo Bistro at West Park Hospital in Cody, Wyo., gets a little busy around the middle of the day, as not only staff come over for lunch but also increasingly so do diners from nearby establishments.

“I think we’re getting more people from the community now,” says Food Service Director Amy Olson with Thomas Cuisine Management at West Park. “We have our regulars now from businesses, and the Buffalo Bill Museum staff often comes in as they are next door.”

“It’s quick and we have probably the best prices around,” Olson offers.

It’s also delicious and there is enough variety to satisfy a variety of preferences.

From the Main Event entree and Grillery grill to the Hearth pizza/calzone/baked pasta and Field of Greens made-to-order salad stations, Buffalo Bistro offers diners a nice array of choices. Daily specials, rotated on a six-week cycle, mean there are at least a couple of new things on tap each day.

The choices are rounded out with several daily housemade soups, breads and desserts, plus a series of packaged items like sandwiches, salads, parfaits and fruit cups for those in a hurry who want to just grab and go.

Popular items at Buffalo Bistro include the grill—the burger patties are sourced from a supplier based in Cody and are organic and grass-fed—and salads like Asian chicken, taco and beef mandarin. The venue is open from 7 a.m. to 2 p.m. during the week and from 11 a.m. to 1 p.m. on weekends.

Patient dining is in the midst of a transition at West Park, with Thomas in the process of implementing its Cuisine on Call spoken menu system, scheduled to debut in October. It will feature a restaurant-style menu with special diet items labeled.

Associates will visit patients three times a day to take orders ahead of the meal period and schedules are being adjusted so that the same person visits each patient all three times to promote familiarity, says Olson. “That way, staff can get to know each patient’s needs so it will be more personal.”

The current patient menu for the small hospital—there are only 25 acute-care beds—leans toward a meat-and-potatoes orientation to accord with patient preferences, but that will be expanded under the new system to offer a wider range of choices.

Some of those choices are already being offered to residents in West Park’s 94-bed long-term care (LTC) wing, where more variety has to get emphasis.

The LTC has salad and sandwich bars with seasonal menus and frequent monotony breakers like Mexican Wednesdays featuring tacos, burritos and quesadillas. Summertime can mean barbecued hot dogs and burgers made on the grill.

Production—from scratch in most cases—for all areas, from the retail café to supplying for the hospital patient meals and the LTC meals, was moved into a brand-new kitchen this past January, into a space that is a lot closer to everything, Olson says.

“Before, we would have to go clear across the building.”