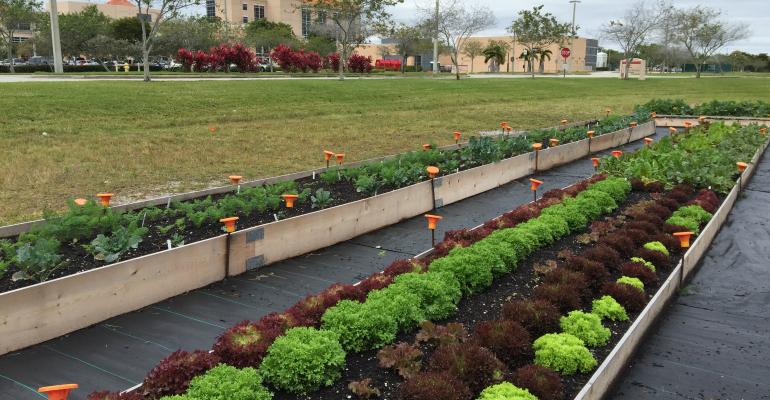 Unlike onsite gardens at most other healthcare institutions, the Grow2Heal Garden at Homestead Hospital in Florida produces not just a variety of fruits, vegetables and herbs for supplying the institution’s foodservice department with fresh produce but also a selection of medicinal plants that have shown healing properties, while also serving as a community educational resource for maintaining healthy lifestyles.

The garden has about 10 acres of cultivatable land of which about two are currently being utilized, says Thi Squire, who manages the farming operation. The bulk of the production is the fairly standard mix of carrots, lettuce, kale, radishes, beets and watermelon as well as culinary herbs such as thyme and basil. But there are also medicinal plants like moringa and guynaboro that have high anti-inflammatory or antioxidant qualities.

Related: The 2020 Hospital Power Players: How the country’s largest hospitals are dealing with coronavirus

“I’m working with the chef now on a microgreen line he wants to add to the patient menu,” Squire adds. “We’re really embracing the food-as-medicine concept, and the main mission of the garden is preventative health through nutrition. After all, food was humans’ first medicine. One reason the garden started was to fight chronic disease, and chronic disease is really something that is preventable and manageable through one’s lifestyle—what you eat and how much you exercise.”

The Homestead Hospital campus, part of the Baptist Health South Florida system, opened in 2007 to serve the Miami-Dade County community. Part of the land on which the facility sits was open, barren terrain, and the CEO of the hospital at the time, Bill Duquette, wanted to do something that was a giveback to the community, so the Grow2Heal Garden idea was born and Squire—at the time engaged in educational activities promoting fresh produce as an important contributor to a healthful lifestyle—was hired to manage it. 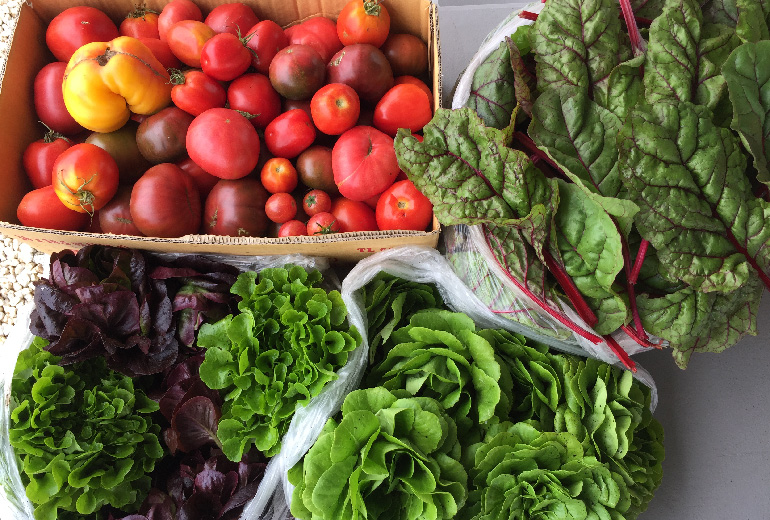 The bounty from Grow2Heal Garden includes standard crops like lettuce and cherry tomatoes as well as more exotic medicinal plants.

“I thought it was a great opportunity to grow produce that the kitchen can use to help make patients better faster,” she says. “I harvest on average 5,000 pounds of produce that I take directly into our kitchen and they transform it into patient and staff meals. You can’t get fresher produce because it literally gets picked in the morning and then taken to the kitchen and then transformed into the meals that they serve.”

Squire does much of the work, including the picking, herself along with a couple assistants. Previous to COVID forcing general isolation, she also had a group of volunteers to help.

The produce is used on menus based on availability and volume. For instance, Squire says the tomato soup traditionally served patients on Fridays is made with fresh, organic tomatoes from the garden when that crop comes into season and ripens.

While South Florida is assumed to have a year-round growing season, Grow2Heal Garden actually slows production significantly over the summer, when the weather is hot, humid and especially “buggy,” Squire says, though there are still a few hot-weather crops such as okra, tropical fruits and watermelon still being grown.

Nevertheless, one advantage of having a growing season that extends through the fall, winter and spring is that the garden can be used as an educational tool for K-12 students, and before COVID halted things, Squire ran a field trip program called Grow Your Lunch with that in mind for students from across Miami-Dade County and the adjacent Monroe County. The sessions, tailored to various age levels, included walk-throughs of the fields and doing some basic task there such as weeding or picking, some lecture sessions and some hands-on work in which they make a lunch they then eat.

“This engages them, it gives them some practical life skills in that they are actually able to prepare a meal,” she says. “They also get to try something new, maybe something they’ve never seen before or have rejected because they didn’t know what to do with it. It just gets them excited and pointed in the right direction.”

Sessions for adults have also been held at the garden with cooking demos utilizing garden-grown crops and talks on how to prepare healthful dishes that can help manage chronic conditions like diabetes and hypertension.

But it is the hospital kitchen that gets the most tangible benefit of the garden, where Squire focuses on producing the kinds of things most easily incorporated into the menus and then getting it to them fresh.

“The unique thing about having an onsite farm is that they are getting it as it becomes harvestable and ripe, so in season they’re getting something every day, though not always the same thing every day,” she says.