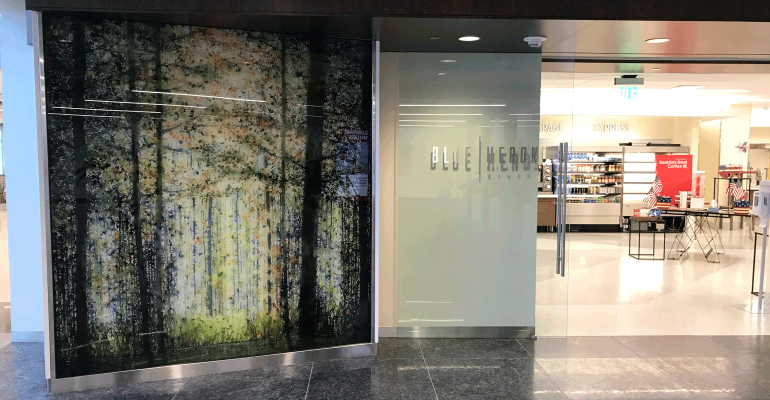 One of the stations is the result of a partnership with “Iron Chef” Cat Cora to bring healthier and more enjoyable dining options to patients and their loved ones.

Houston Methodist’s new $380 million medical center in The Woodlands, Texas, exudes transparency, warmth and wellness. The 470,000-square-foot facility, which opened July 1 just north of Houston, features state-of-the-art technology, a full-service, acute and emergency care facility and a dynamic new bistro with stations that cater to every taste and desire.

“The Blue Heron Bistro is beautiful and welcoming—much like the food we serve to our patients and guests,” says foodservices director Howard Georgens, who spent the bulk of his career in hotels before joining the opening team at Houston Methodist The Woodlands. “My background in hospitality gives me an edge here. We’re focused on service and quality both on the retail side as well as the patient dining side. We’re really trying to bring that ‘hotel experience’ into the hospital environment.”

The Blue Heron Bistro holds more than 120 guests and features both indoor and outdoor seating. It offers a number of different dining concepts including comfort food, pizza, a grill, a salad bar offering both build-your-own and seasonal composed salads as well as a concept developed exclusively for Aramark called OLILO by Iron Chef Cat Cora.

OLILO offers a healthy, made-your-way menu, featuring Cora’s signature Mediterranean tastes and flavors. The name pays tribute to her Greek heritage and is derived from olives and olive oil—staples of Mediterranean cooking. “OLILO is basically a build-your-own fast-casual Mediterranean concept,” says Georgens, who works closely with the hospital’s Executive Chef John Vu. “The menu features super greens, grain blends, flatbreads and quinoa tabbouleh with choices of protein, homemade spreads, toppings and dressing. It’s a really fun station that brings healthy options into the hospital. It’s been seeing a lot of traffic so far, too.”

Other stations in the bistro currently run on a two-week cycle and feature seasonal ingredients with a focus on freshness.

On the patient side—the hospital currently has 290 beds—Aramark is running its new in-room dining menu that mimics a hotel room service menu and allows patients to order whatever they’d like throughout the day, customizing their choices as they so desire.

“We’re the first in the Houston Methodist system to roll out Aramark’s ‘treat yourself’ menu,” says Georgens. “It will eventually become standard in all of our hospitals. And so far, we’re getting really great feedback about it from our patients.” Despite the obvious growing pains and challenges associated with opening a brand-new facility, Georgens says it has been a fairly seamless process.

“Our biggest challenge has been staffing as we’ve grown so quickly so fast,” he says. “But everyone who was hired was chosen for a specific reason. It’s been all hands on deck since day one, and all of our employees have stepped up and helped in whatever capacity they can. It’s amazing to watch.”

Georgens hopes to continue the momentum and eventually establish a culture at Houston Methodist The Woodlands that is similar in style to the culture within Hyatt Hotels.

“My goal is to create a service model that inspires and empowers staff members to deliver authentic hospitality,” he says. “Maybe that means surprising a patient with a chocolate chip cookie or creating a special holiday theme to break up a long work week or putting a fresh flower on every tray. It all falls on service. We need to focus on engaging our customers and getting to know them. Then we must anticipate their needs and push to elevate the service expectation.”