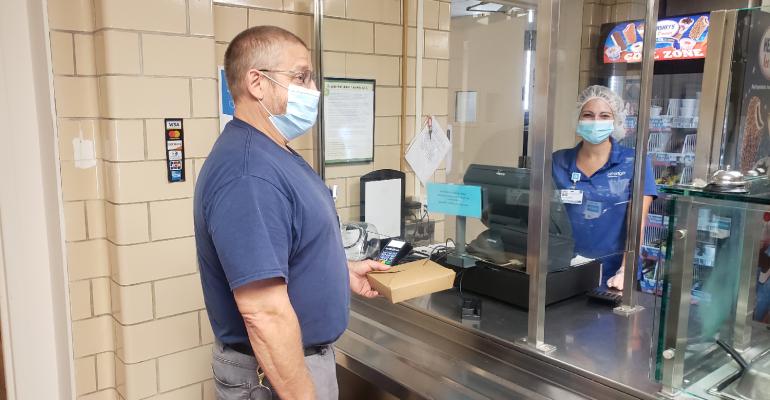 From self-serve stations to supply glitches, a Pennsylvania healthcare system pivots to address the pandemic era.

Danville, Pa., based Geisinger runs a hodgepodge of hospitals throughout the state, from a 440-bed facility that in pre-pandemic times did north of $6 million in retail foodservice a year, to a boutique property that serves eight to ten patients a day. The health and safety demands of a pandemic, supply chain glitches and a steep drop in clients demanded a foodservice strategy that would work for all of them.

The patient side was the easy part, says senior foodservice director Steve Cerullo. The primary challenge was figuring out how to scale down menus to serve a much smaller population—occupancy dipped from the 90s to about 50% in the spring—while managing growing food shortages.

“Lots of things were in short supply,” Cerullo says. “Milk and dairy became a challenge. Then meat became a challenge.” Additionally, single-serve packaged foods were scarce, since manufacturers scaled back their production as schools closed in the spring.

Geisinger coordinated with vendors to determine what products still had a steady pipeline, and built a single, streamlined menu around that. “We rolled out that same menu, from our 440-bed flagship to the smallest hospital,” Cerullo notes.

Related: How salad-making robots are expanding the reach of food service of at Mayo Clinic Hospital

Business on the retail side is slow, thanks to lower patient censuses, a limit on hospital visitors and more telecommuters, Cerullo says. “Work from home was a killer for us,” he adds. Some 9,000 Geisinger employees will work remotely through the end of 2020. During the first few months of the pandemic, sales were off about 65%; as of early September, some of that lost business is returning, with sales off about 40%. 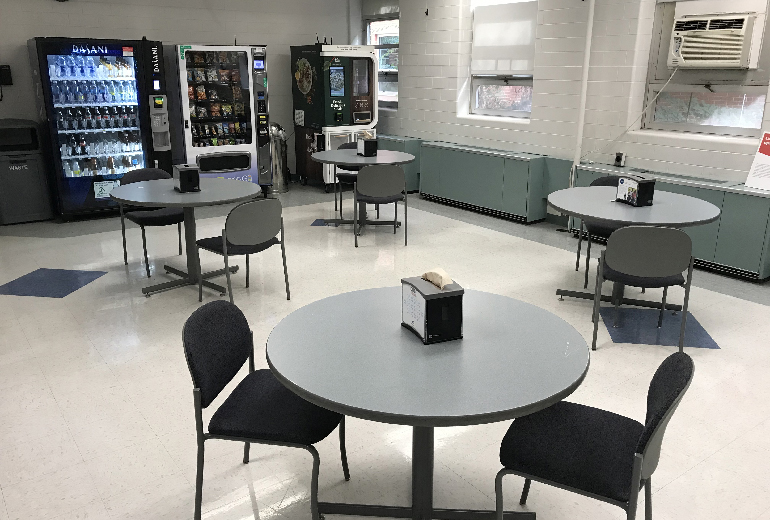 Seventy percent of seating was removed from cafés, which focused on two- and four-tops.

Geisinger’s retail operations required a number of modifications. Arguably the most dramatic change was in service style.

The make-your-own stations are now staffed and shielded. The salad bars have morphed into made-to-order stations a la Chipotle, with a staff member on one side of the shield and the customers indicating their preferred salad mix. Grab-and-go salads and sandwiches have grown in popularity as well.

Advance to-go orders have surged, which has helped achieve the goal of reducing bottlenecks in the cafés during rush times. Employees can now order and pay through the hospitals’ payroll deduction system, then pick orders up from racks set up in the cafés.

Despite the drop in business, there have been no layoffs, although flex workers have had their hours trimmed. Idle employees have been reassigned to other departments that needed help. Many foodservice workers have ended up filling in at entrances screening incoming clients, for instances.

Some of the changes in the cafés have added to the workload.

“In the past, one person could set up the salad bar and it would serve 200 people. Now we have somebody out there making every salad. One person makes the hamburgers, and another one hands out ketchup and mustard packets from behind a shield,” Cerullo says.

The cafés look different in the expected ways. In addition to new racks that hold mobile orders for pickup, floor stickers cue customers to socially distance, and about 70 percent of seating has been removed. Communal tables that once seated 15 to 20 diners have been replaced by two-and four-tops. Fountain sodas have been replaced by bottled drinks, but coffee was a bit trickier to manage. For now, personal mugs and cups are banned, coffee must be dispensed into a new cup—no refills—and hand sanitizer and gloves are available and encouraged when using the dispenser.

Using Microsoft SharePoint, the department informed hospital employees about the changes. “When people started to come back, they forgot something had happened, and they were complaining about the fountain machine being turned off or the salad bar being gone,” Cerullo says. “We put a lot of information out there, including some videos and graphics, to let them know how to operate in the new model.”

Catering jobs—which in a normal year would generate more than $2 million—dried up with limits on group gatherings; in March and April, there was no catering on the books. But requests are gradually coming back, Cerullo says. To meet demand and minimize contact, the team developed six packs—meeting kits filled with six individually wrapped bagels, pastries, cold sandwiches or salads. Clients, who are all internal during this time, can order as needed, then either pick orders up or have them delivered.

Forecasting has been a bit of a dice roll, Cerullo says. The department has shifted from yearly to quarterly budgeting, planning for incremental improvements. He doesn’t expect to match 2019 volume until possibly the second quarter of 2021, and that will depend on the availability of a vaccine and whether remote work will continue into next year.