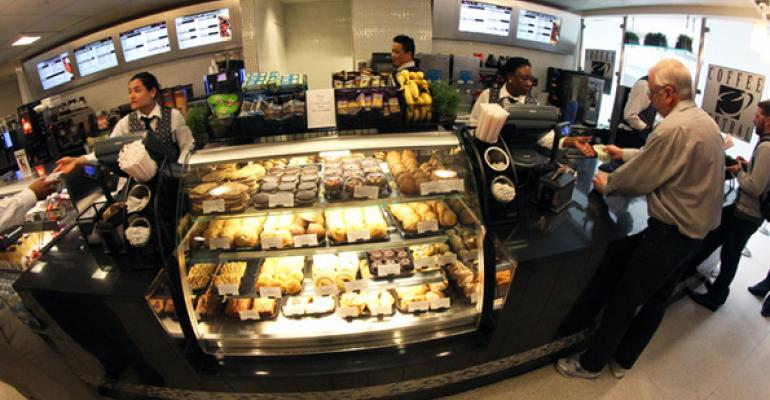 After more than 15 years, the high-volume Coffee Central unit was overdue for an upgrade.

It’s often said that experience is the best teacher. In foodservice, it can also guide concept refinements that enhance an already successful operation. At Boston’s busy Massachusetts General Hospital, where Nutrition Services has operated its high-volume Coffee Central unit for over 15 years, a recent overhaul gave the department a chance to use its experience to fine tune what has always been a hugely successful retail operation.

The retail Coffee Central unit, which operates 24/7, now services about 3,300 customers and has been ringing up about $10,000 a day in beverage, baked goods and limited prepared food sales. That represents a better than 20 percent increase over its sales volume before the upgrade.

Just as important, the improvements helped the department streamline operations to improve efficiency, speed of service and throughput, according to Joan Shea, Mass General’s assistant director of retail operations and new business development.

Classy, in an understated sense

“The physical operation had to be renovated,” she says. “After years of constant use, equipment maintenance had gotten costly and the physical flooring and façade had deteriorated. Coffee Central had originally been designed for half the volume and to operate only during the day. Because we’d moved to a 24-hour operation, we needed more flexible production capacity to be efficient.”

Mass General’s administration recognized those needs and approved funding as a capital project, but also had specific concerns.

“In an era of accountable care, it was clearly communicated that our mission was to ensure that the look and feel of Coffee Central portrayed a highly-efficient, quality operation, but was to avoid some of the ‘glitz’ of commercial concepts,” Shea says. “The expectation was that we make it classy in an understated sense, appealing to the comfort level of our wide range of customers and making them feel at home.”

The department brought in Cini-Little’s Ron Kooser, who had consulted on the original project, to help evaluate the operation’s potential and specify needed changes. The renovation itself was shoehorned into a 12-week period between Thanksgiving and mid February of last year.

Given the operation’s longstanding success, what changes were needed? The major ones stemmed from the evolution of the unit’s service profile over time:

• customer lineups across the front counter usually blocked a view of baked item choices in the merchandising case;

• a move from daytime operation only to 24/7 overnight service required some additional prep and production space;

• and changes in ADA (Americans with Disabilities Act) requirements needed to be addressed in the counter/service layout.

Some upgrades weren’t options, given the hospital’s requirements. For example, because of its location at the main crossroads within Mass General’s hospital complex, heavy and constant foot traffic leaves no room for coffee shop seating. Further, space limitations meant there was only room for a modest extension of the counter’s length. And because the unit’s location was so close to the main entrance, the hospital still wanted to avoid the kind of self-service options that would necessitate constant clean up and complicate hallway traffic patterns.

“The most important change was to design a more effective queuing system,” says Shea. “We wanted to improve our throughput speed, especially at peak periods.”

One change was to split the line of waiting customers into two: one for full service and one for express, beverage-only service. While the express option had existed before, the rule was not well adhered-to. During busy periods, one counter station is dedicated to express-only customers and staff calls waiting customers directly from that line. Full service customers go to the other counter stations as they open up. The express station also was the one re-designed to fully meet ADA regulations and provide ADA access.

The ADA modifications and the addition of a fifth POS station for use in peak periods required a slight lengthening of the main counter. The main display case at the end of the line was “elbowed out” at an angle to make it continuously visible to both in-line customers and to passers-by in the hallway. And because the unit operates with only 3 FTEs in the evening (vs. up to 8 FTEs during peak daytime hours), a second display case was added within the other end of the counter where nighttime stations are open.

To help waiting customers determine choices before they get to the counter, a stand offering a paper takeout guide to the wide variety of beverage options lets waiting customers peruse these (and associated nutritional information) in advance. Visibility of menu boards was also improved.

Behind the counter, other changes were made to improve efficiency. The distance between the serving and prep/equipment counters was widened slightly, by about 6 inches, to facilitate staff movement. A second espresso machine and additional coffee brewing station were added and two distinct prep areas were created, separated by a central area for lower volume items like fair trade and daily specialty flavor options.

“The menu is more diverse today and staff needs access to more parts of the prep area,” Shea says. “That is especially true since we expanded the menu for the late night shift.

“At the same time, we intentionally did not want to widen it too much, because that adds extra steps for workers—we’ve made that mistake in the past.”

The upshot: since the various changes were made, benchmarking shows that in peak periods, sales have gone from 16 per minute at four registers to 22 per minute at five registers, an increase from four to 4.5 sales per minute, per register.

Along with the physical upgrade, Coffee Central updated its menu offerings as well.

A decision to expand its operating hours to the late evening meant the addition of new menu items for that period. Without exhaust hood and ducts, options were limited. During the day, hot food is limited to items like bagels that can be toasted on a conveyor toaster located in the middle of the back counter.

“We evaluated the entire menu as part of the upgrade,” says Coffee Central operations manager Maggie Miller, RD. “There was a long list of potential new items but we wanted to ensure the concept maintained a clear focus on its identity as a full-service coffee shop.”

During the day, the main offerings continue to be fresh baked items, most from the Mass General bakery, as well as toasted bagels, parfaits and snack boxes (containing items liked hard boiled eggs and cottage cheese). In the evenings, the menu is expanded to include two fresh soups, two custom-made salad options and a selection of pre-made and made-to-order sandwiches. The soups are prepared in the main kitchen and served from a portable stand that is moved in each evening only for the second shift.

“We tried to ensure the menu mix did not veer into many of the high caloric offerings you find in commercial coffee shops,” she says. It worked with the bakery to develop items that have nutritional profiles meeting its wellness standards, but still offering trendy choices like mini Bundt cakes, mini scones and fresh muffins.

While some traditional favorites are also offered, “we make sure the healthier choices are well merchandised and promoted,” she says. All items are color-coded and provide full nutritional information.