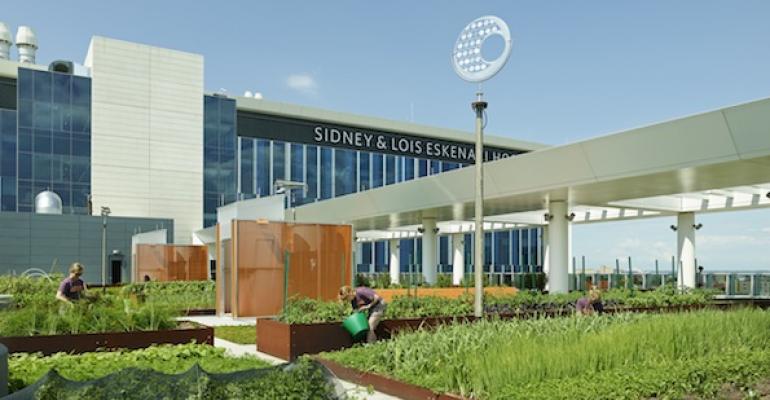 <p>FARMER IN THE SKY: Crops slated for use in onsite dining operations grow on the roof of Eskenazi Hopsital&#39;s outpatient building.</p>
News & Trends>Healthcare

Eskenazi Hospital operates a 5,000 square foot “sky farm” on the roof of its outpatient building and uses the bounty in all facets of its onsite dining operations.

You get a great view of the Indianapolis skyline from the roof of the outpatient building on the three-building campus of the Sidney & Lois Eskenazi Hospital. You also get a lot of great produce from the same 5,000 square feet of growing beds located on the roof.

That produce, from greens and tomatoes to eggplant, green onions, carrots, herbs and even squash, is used in the hospital’s two retail dining outlets, in patient dining and in cooking demonstrations conducted by staff nutritionists both at this site and other Eskenazi Health locations.

The Sky Farm on Eskenazi’s roof is managed by an outside entity called Growing Places Indy and was the brainchild of Eskenazi CEO Dr. Lisa Harris, says Tom Thaman, director of Eskenazi Health Food & Nutrition Services. “Food & nutrition services is a strong aspect of this organization and Dr. Harris also wanted to promote urban gardening. We never anticipated that the garden would supply all our produce needs—we use way too much—but it effectively promotes healthy eating and the quality of our dining program.”

Signage in Eskenazi’s onsite retail outlets—the Ingram Micro Mobility Marketplace and the Café Soleil restaurant—informs guests what ingredients and dishes are made with produce from the Sky Farm. Visitors, staff and even patients are also invited to come up to the roof to stroll around the growing beds (during the warm weather months, of course, as the Sky Farm is open-air).

Thaman says the onsite garden/farm idea originated in the hospital’s original location, when it was named Wishard Hospital (the entire facility moved to the new complex under the new name in December 2013). “We had a garden at Wishard where the staff and each department participated,” Thaman says. “We cultivated a courtyard and had an urban garden there, so the theme was already set and this just took it to the next level.”

That next level was made possible by all the open space on the rooftop, perfect for cultivating crops as it gets plenty of sunlight during the growing season, which in Indianapolis generally lasts from May into October or even November for some crops.
Last year, the Sky Farm produced around 2,000 pounds of produce, which may not have represented a large percentage of the hospital’s total but definitely had a huge psychological impact with its message of freshness, locality and sustainability. It also added extra impetus to events like Kale Day, this past October 1, when the different outlets featured dishes using kale, most of it grown on the premises.

A Retail of Two Eateries
One outlet for the Sky Farm’s bounty is in retail operations, which are conducted from two venues. The Ingram is a multi-concept cafeteria featuring deli, Italian, action, salad bar and grab-and-go stations. The Italian station includes a gas-fired pizza oven while the action station rotates a variety of made-to-order cuisines, from Asian stir-fry to pasta dishes. All stations feature both hot and cold wells for maximum flexibility and the Ingram is open round the clock during the week (though not all stations operate on the off-hours). The registers are scattered across several exit points to facilitate quick and easy checkout.

Café Soleil is a 109-seat sit-down restaurant with an Express component that includes grab-and-go options and Starbucks branded coffee drinks. The restaurant part of the eatery offers tableservice and special 10-minute meals for staff in a hurry. An expanded staff of up to six servers are on the floor at all times during the lunch rush to ensure diners get quick service and turnaround. Thaman says Eskenazi’s location directly across from the Indiana University-Purdue University campus gives Café Soleil a ready supply of students looking for waitstaff positions.

“We wanted to have a place where staff can sit down and relax to eat,” Thaman says. The sit-down concept was already in place at Wishard, though Café Soleil has more than twice as many seats. “And we’ll be adding more,” Thaman adds. “We are on a medical center campus with a number of systems nearby so there are plenty of people who might be looking for a sitdown meal at lunchtime. We have no trouble staying busy.”

“Our retail numbers have tripled over what we were drawing at Wishard,” Thaman says. “That’s with the same number of staff, so this has been a huge success.”