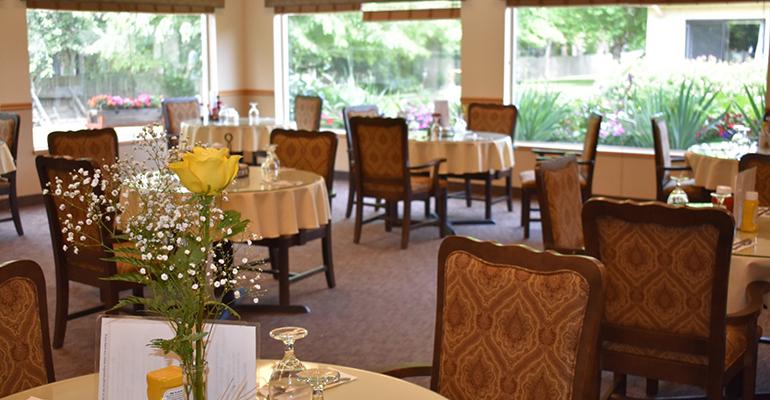 Nightingale Health Care’s Mount Baker Care Center and Summit Assisted Living in Bellingham, Wash. were until a couple years ago fairly traditional senior care facilities when it came to dining. Choices were pretty much set by the kitchen for each meal with few options.

Then came a complete change prompted by a need to put the emphasis where it should be: on the customers rather than the institution.

Related: When one size doesn’t fit all

“The common perception of skilled nursing facilities is people give up their independence and [are] subjected to stereotypical ‘institutionalized food,’” explains Jozef Bosman, dining services director. “Our facility’s model is resident-centered, which we have also brought into the dining room.”

The change basically revolved around meeting resident preferences and providing plenty of options, especially to customize individual meals. There is now a four-week cycle menu with daily specials so if a resident doesn’t feel like having the day’s special, they are free to choose from 13 items that can be customized on the a la carte menu, which, by the way, they have had input in creating along with the rest of the menu.

In fact, that is really the only major “cost” of this approach, according to Bosman: “There was no cost to implement it,” he says, “but the biggest investment was time, where I had and continue to have monthly resident council meetings where the residents get to voice their opinions on what they would like it see on the menu.”

As for the mechanics of implementing the approach, “the biggest challenge [was] getting the kitchen staff to understand that this switch would actually [make things] easier than before,” Bosman says.

On the other hand, the benefits were significant, not only reducing per-patient daily food cost but also food waste while increasing resident satisfaction.

Bosman says per patient daily food costs have plunged from $8.99 per day to $6.23, approximately a 30% reduction, while what waste there is—and it’s significantly less than before because meals are made to order instead of pre-prepared—is now going to feed people in food waste recovery and food waste recycling programs instead of ending up in landfills. A four-month study showed that Mount Baker donated 1,163 pounds of food to the recovery program run by a local organization called Sustainable Connections, which became 968 meals and initially reduced food costs by close to half.

As a result, Mount Baker was recognized with a sustainably business award by Sustainable Connections and was also voted “Best of Bellingham” in the local Bellingham Alive magazine.

While financial benefits are always nice, what made the new patient-centered dining approach a real winner was the impact on residents, who Bosman reports became more lively and interactive during meal times since they can order what and how much they want. Many as a consequence also saw their weights stabilized or even increased, a critical issue in skilled nursing environments.

“This program allows the residents to engage more in the dining room as they read the menu and discuss what they are going to order,” Bosman says. “Because meal times tend to be one of their most important social activities, we want to make sure they are enjoying it to the fullest. In addition, with resident/restaurant style choices, residents feel that they have more control and keep their dignity instead of having ‘institutional choices’ to eat what is served.”

“Happiness,” however measured, has definitely jumped, he adds, “and has filtrated through the staff and the facility as more residents are alert and social and feel that that they can choose from our menu and specifically state what and how they want their meals prepared. If they like they can order seconds or just order more of an item that they enjoyed.”

Another result of the new program has been that many family members now come and dine with the residents.

“This bonding over meal times has never happened before, and now our challenge is that we do not have enough seating at times,” Bosman observes.

The facility has also launched “Special Occasion Dining” events where residents can invite members of their families for a holiday dinner such as at Thanksgiving, where an extensive menu with holiday favorites is served.

Resident-centered/restaurant-style dining was originally implemented at the Mount Baker Care Center skilled nursing facility and the Summit Place Assisted Living facility two years ago and has since been expanded to three other locations in the Nightingale Health Care network.

“There was a need for this concept because when you are moved into a skilled nursing and assisted living facility, you give up so much,” Bosman summarizes. “For a better quality of life, we wanted to be able to provide choices to our residents, especially when it comes to meals.  Our goal was to have them enjoy their ‘new home’ and not feel like they are in an institutionalized setting with no choices. Not only has reducing waste and food costs paid off financially, but more importantly it has improved the quality of life for our residents.”