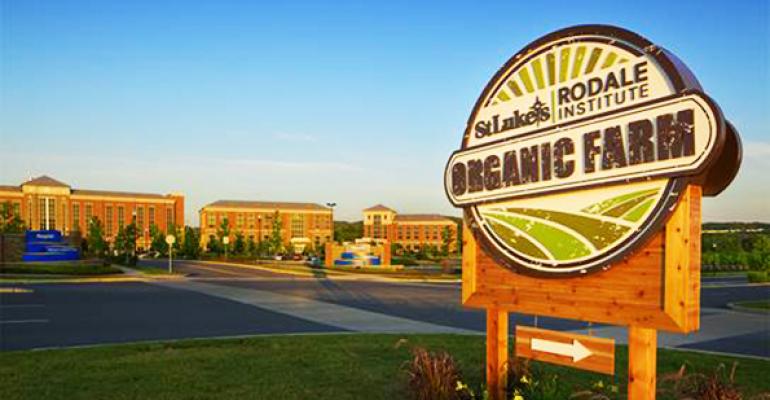 The 10-acre farm provides produce for both patient and retail meals.

When hospitals look to purchase locally, many turn to an onsite garden. But one Pennsylvania hospital went further and created its own 10-acre farm.

St. Luke's University Hospital Network’s Anderson campus sits on 500 acres of land and happens to have the Rodale Institute, a nonprofit dedicated to organic farming, for a neighbor. A partnership between St. Luke’s and Rodale was ideal for creating a hospital farm, and the foodservice team began serving produce from the St. Luke’s Rodale Institute Farm to patients, staff and guests last year.

“It started with our employees asking, ‘what can we do with this land?’” recalls Kira Bub, a marketing consultant with St. Luke's Hospital and Health Network. “We have a president who is very open to ideas and to different things, and he encourages employees to think outside the box.”

It was Ed Nawrocki, the president of St. Luke’s Anderson campus in Easton, Pa., who reached out to Rodale to start the partnership.

The hospital made a capital investment to Rodale of $125,000 to hire a farmer and handle all startup costs associated with developing the farm, including readying the soil for organic farming. Rodale now bills the hospital quarterly for additional farm costs, such as growing the farm from the original five acres to the current 10 acres.

Each week Lynn Trizna, the onsite farmer, sends the foodservice team an email with what’s available from the harvest. The hospital kitchens, which serve about 5,500 people per day, place orders with the farm and plan their meals accordingly, and Rodale staff deliver the produce each week. There are also weekly farmers markets on the hospital campuses featuring the bounty from the farm. This growing season the farm is on track to produce 45,000 pounds of produce.

Trizna believes the farm will be self-sufficient at year three. “With farming and with any business there’s a lot of money upfront. Once we get a lot of the infrastructure taken care of, we’ll focus more on paying ourselves and making sure that it’s a sustainable model,” Trizna says.

“St. Luke’s and Rodale Institute hope that this model of farm-to-table food will be scalable and replicated throughout the country,” Nawrocki said in a statement earlier this year. The institute has already received inquiries from other hospitals.

Before the second growing season began, staff from the hospital and Sodexo, the hospital’s foodservice management company, met with the Rodale team for a “seed meeting." They discussed menu planning, seed planting and how to better utilize the produce.

The first year the farm grew 13 varieties of vegetables, but this year they upped the number to 30. More variety means it is less likely that the hospital kitchens will be inundated with one type of produce. Staple vegetables also were added: “This year we have onion, celery and carrots because we can use those products basically in everything that we produce every day,” says John Loughran, senior general manager of nutritional services at St Luke’s Health Network.

Trizna does a lot of succession planting, or planting seeds throughout the season rather than all at once, to make sure the kitchens have a more consistent produce supply. This year they’ve added a 1,000-square-foot greenhouse to further extend the growing season, and hives for bees, with honey deliveries are scheduled for next year.

“For the first season we really focused on the produce in the cafeteria,” Bub says. Staff and visitors probably noticed signage indicating what produce was from the farm by the cafeteria salad bars. “This season we added the Rodale logo to the patient menu, and we incorporated more produce in the patient menu," she says. "[Our] focus for this season was making sure that more of this organic produce actually got into our patients’ hands in the hospital, not just in the cafeteria retail operations.”

The hospital also added a maternity program this year. Select new moms at St. Luke’s Bethlehem campus receive a basket of the farm’s produce. Loughran hopes this will encourage new moms to buy organic. "It’s all about teaching and giving people access to a great product," Loughran says.

Tomatoes are also used on sandwiches and salads in the cafeterias. Although Trizna loves heirloom varieties, she learned the classic red, round Rutgers tomatoes held up the best when sliced with commercial cutters. Now she grows Rutgers for the kitchen and heirlooms for the farmers market. "I think both sides have had to adapt," she says.