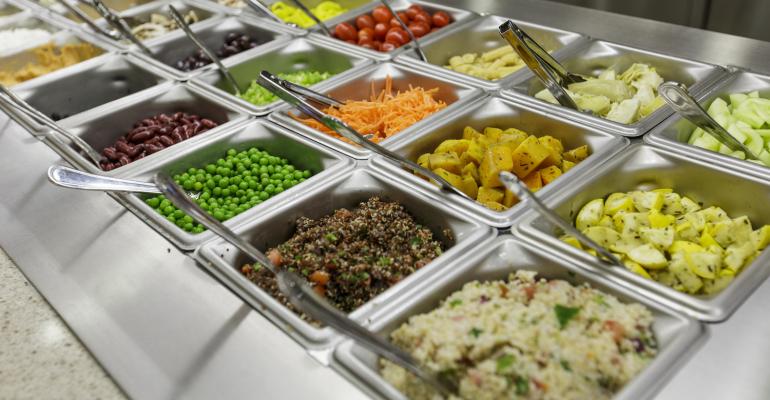 Chandler Dining Center offers an array of meal options from nine serving stations ranging from Asian and grill to deli and Chef’s Table.

Morrison Healthcare, which manages dining for Chandler, operates three other cafeterias scattered around the complex in addition to the CDC, though none are as comprehensive as the new eatery, which also is open 22 hours a day. It closes for hour-long menu conversions for breakfast at 5 a.m. and lunch at 10 a.m. Overnight, it is the only foodservice venue open at Chandler, though not all of its stations operate in the off hours.

Located in the highly visibility Pavilion A next to the pedway accessing the parking area, CDC draws customers not only from the hospital’s staff and visitors but also from the university campus next door. Eventually, it will also serve patients and staff at the new Shriners Hospital for Children, which is scheduled to open next year, when Chandler itself will be adding another patient floor.

The stations in the CDC include Chefs Table, an action station that rotates five menu concepts from week to week, including a very popular Asian wok-based concept.

“We use interchangeable equipment,” says Terri Schnurr, Morrison’s general manager at Chandler. “We can put in a grill, a flat top or whatever the concept requires. At breakfast the station is used to make to-order dishes like waffles and pancakes.”

Trattoria is centered around a brick pizza oven but also offers made-to-order pasta dishes and flatbreads, while Southside Grill dispenses traditional grill items like fresh burgers and chicken plus sides like traditional and sweet potato fries and potato wedges.

Sushi is made fresh in front of customers every day at a station that also offers grab-and-go items, and salads are offered at two areas.

One is an extensive salad bar that not only has the basic salad ingredients like lettuces, vegetables and proteins but also over half a dozen different kinds of cheeses, at least two grains, roasted vegetables, marinated olives and more. A separate station called Chop Chop offers salads made to order.

Traditions is a steamtable concept dispensing familiar comfort foods like fried chicken and lasagna, and the deli offers carved meats and a variety of salads. A branded Starbucks station offers not just specialty coffees but pastries.

The space now occupied by the CDC was previously an undeveloped area in Pavilion When the new eatery opened, another older cafeteria was shuttered and is being converted to a new neonatal intensive care unit.

Concurrent with the opening of the new CDC, Morrison also debuted a new production kitchen two floors below the retail dining venue that will supply room service meal service to some hospital units. It also prepares meals for the various retail sites as well as some bulk ingredients for the CDC, which does most production at the stations in front of customers.