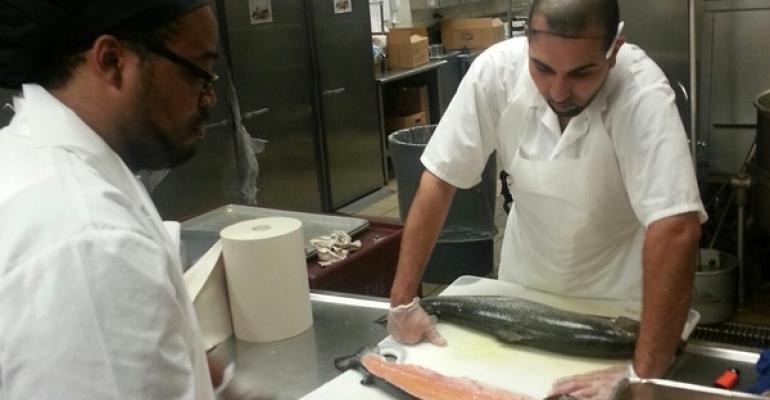 Time to train, away from everyday responsibilities Basics like stock, knife skills, recipe math, food safety are part of the program Inspired by peers in North Carolina

Designed to take kitchen staff out of their everyday routine for several days of training, the White Toque Culinarians program at Robert Wood Johnson University in New Brunswick, NJ, puts the focus fully on food.

Gee says he hopes to create a culture that more closely resembles that of the CIA.

“We’re trying to create a food culture,” Gee says. “When you go to the CIA, everybody speaks ‘food.’ And that’s happening more now here—the staff is more engaged because of the White Toques.” 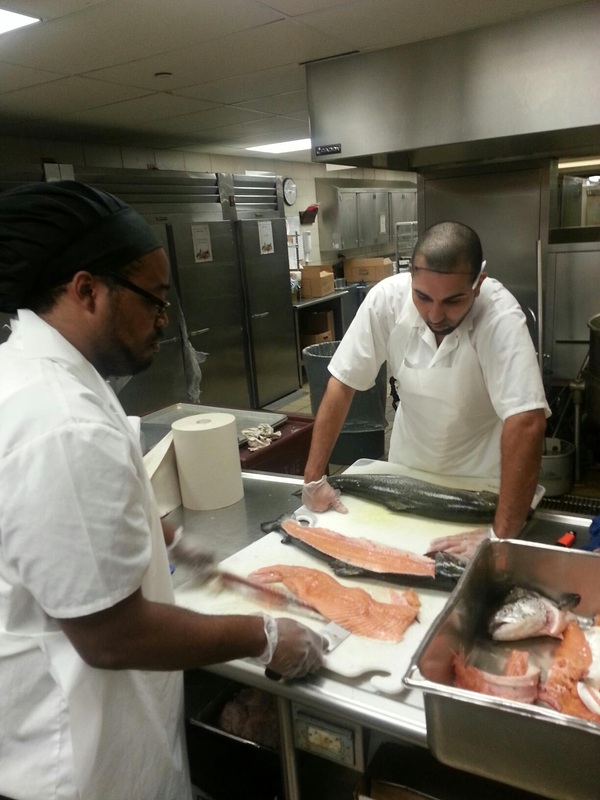 Prior to the program, there had been cursory training for kitchen staff, but nothing that focused enough importance on a solid foundation of technique and understanding of flavors. For example, making a stock from a whole chicken is one culinary building block taught during the course.

“Not everyone has made a stock from scratch or broken down a whole fish or chicken before,” Gee says. “Everyone has a lot to bring to the table, from a culinary standpoint, even, but the fundamentals have to be in place, too.”

One aspect that makes the program work so well is the fact that students are freed up from their everyday responsibilities in order to participate. When they’re not stressed about feeding the typical 600 to 700 patient meals each day, it’s a lot easier to focus on learning.

The three-day program is a progression. On the first day, each student breaks down a whole chicken and turns it into stock. On the second day, the students learn how that stock can become a sauce. By the third day, the students execute a recipe: pan seared chicken in pan gravy over fresh pasta.

Gee, who just recently earned his CEC, says the biggest key to being a chef is practice and organization—a mise en place—two things he emphasizes during training.

Knife skills, recipe math and food safety are also woven throughout the experience, and the new skills are put into practice right away back at work. Graduates of the program are often tapped to work with more complicated menus for catered events, as well.
The similar Black Hat Chefs program at Rex Healthcare in Raleigh, NC, served as inspiration, Gee says.

“We had visited for a week with Jim McGrody (director of dining services at Rex Health) and Ryan Conklin, CEC, (executive chef), and they shared their wealth of knowledge with us,” Gee says. He came back with the idea for White Toque Culinarians.

Right now about 80 percent of the staff has completed White Toques training, and once all the staff has graduated with solid kitchen skills, Gee hopes to take it to the next level, as the Black Hat Chefs program has done, branching out into more specialized areas, like cheese or sausage making. 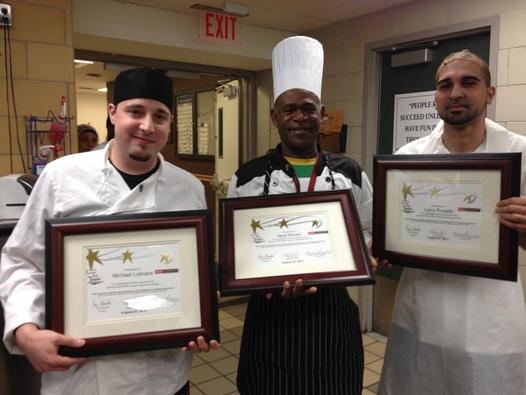