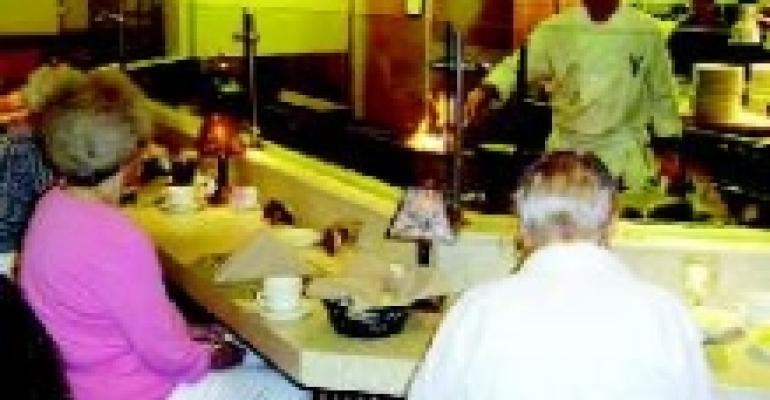 Some of the future of dining in CCRC environments may be glimpsed at Brooksby Village, in Peabody, MA, outside Boston. Here, Dining Services Director Paul Coco has implemented a range of amenities, from everyday exhibition cooking to wine service, that he believes will increasingly become the standard for the industry.

Brooksby, one of 16 properties managed by Erickson Retirement Communities, features a 90-acre campus with five restaurants offering the community's 1,385 residents (1,300 in independent living) a range of dining options: formal dining in the Windsor Dining Room; a cafeteria atmosphere where residents and staff mingle to eat at the Greentree Cafè; buffet-style dining at the Harvest Grille; exhibition cooking at the Overlook; and the casual bistro ambiance of the Cider House Pub.

The current Brooksby was built less than five years ago.The previous campus was an institutional environment where dining "was run by the dietitians," Coco says."Residents filled out paper menus, circling their choices with golf pencils.The kitchen would then plate the food and deliver it in heated carts. I wanted to move to a restaurant platform with pagers, menus, waitstaff that takes orders, a la carte items, wine service and so forth."

Coco had joined Brooksby at the end of 1999 and immediately began pushing for changes."The second clubhouse [there are three] was just being designed and I noticed that while there were game rooms the only dining venue was a buffet. So I talked to the development people and asked if we couldn't create a more interesting space that dining services could take over. They agreed, so we took the space and made it into the Cider House Pub."

The 75-seat Cider House features alcohol service, a fireplace, terrace and set menu. It is open most of the day to offer residents what seniors in retirement communities perhaps crave most: a place to socialize.

However, Coco's centerpiece is the Windsor, the formal dining room open only for dinner. It is the venue where his "restaurant paradigm" is most apparent."One of my first goals was a liquor license," he says."It's a paradigm shift, but to get to a restaurant style platform it was important to have a wine list." He didn't hard-sell. Initially, the program at Windsor only used a small wood grain cocktail cart holding a couple of reds and whites. It was merchandised-with a menu insert and generally was used only by a few diners. But soon the power of example began working and more diners began ordering, first only for special occasions, but then more routinely.

Suggestive selling by the waitstaff helped, but the catalyst was an offer by one of the residents who was a real wine connoisseur—Eric Bauer, one of the founders of Boston's most prominent wine businesses. Bauer offered to host a wine tasting in the summer of 2000 that was a hit and has been repeated several times a year since. Now,Windsor offers as many as 10 different wine selections each evening.

Last September, the opening of Brooksby's newest dining venue, the Overlook, provided another step forward-for the wine program.At the entrance to the dining room, Coco placed a cruvinet showing the wine selections."When you look up at the host, you can't help but notice this large piece of furniture, which is attractive and also stores the wine so that it isn't in back but out front. It markets the wine before they even sit down."

Overlook also features nightly exhibition cooking at a specially designed display area by the staff of chefs, who take turns in front of the customers.The cooking stage features a grill and burners as well as seven counter seats that are first come/first served (though the show is visible from all parts of the dining room).

The exhibition chef batch-cooks a couple of the selections on the evening's menu—"sizzle" items like scampi, chops, steak and trout almondine."We pick menu items that involve flambe-ing to get that chophouse look," Coco says.

Overlook's exhibition stage was built as an experiment, hence the limited number of seats. Given its success (the seats are always filled), the next generation station will have up to 20 seats as well as a wood-fired stone oven.

Both the exhibition cooking and the wine are meant to be enhance the dining experience for residents, not to add incremental sales, says Coco.The wine is not a moneymaker, he emphasizes, but rather an amenity, something that adds to the refinement of the dining experience.A glass sells only for $2.75 to $3.75, representing a 100-percent markup that is way below the typical markup in a commercial restaurant.