Schuylerville High School’s dining team served about 100 students these two Italian classics made with a surplus of commodity chicken filets. They’ve had great success with meatloaf and takeout-style Chinese entrees.

Schuylerville’s piccata stayed true to the traditional flavors: lemon, capers and parsley in a buttery sauce.

Look at that char on top! This is the first indication of a bubbly, cheesy Italian treat. Chicken Parmesan and other comfort foods have been doing their job very well during the pandemic, bringing that taste of grandma’s kitchen into a cold world.

Chicken or the egg?

A fantastic part of spring in many parts of the country: getting back outdoors on a regular basis! Here at Marin Country Day school’s culinary garden, a student is getting to know a chicken and gathering eggs. The dining and garden here are both overseen by Chef Jason Hull, an FM Chef to Watch.

One thing we miss about air travel is the intoxicating scent of Cinnabon shops! At River Road ISD in Amarillo, Texas, Cinnabon-inspired cups have been a huge hit, made with one premade cinnamon roll cut into quarters then drizzled with homemade icing (butter, powdered sugar, coffee and vanilla).

Another great use of commodities: everything in this goulash at AlWood Elementary School in Illinois is a commodity product!

“We recently added a fresh baked focaccia to the menu,” says Chef Alex Leigh of Brigaid. “Kids, staff and faculty all love it. We intend on serving it with all of our pasta dishes moving forward.”

Traditionally, bread baking experts recommend focaccia for beginning bakers. “It’s a classic and when done nicely it is so beautiful,” Leigh says. “There is something about baking breads in school and serving it an hour later while it’s still warm. We love it!”

At Clovis (Calif.) Unified School District, Director Robert Schram and the school food team have been working on plant-forward sliders, starting with these patties of quinoa, chickpea and mushrooms. There’s also another version with the same base ingredients plus roasted red peppers, cilantro and green and red onions.

The finished product! To keep the plant-forward power going, the sliders are topped with arugula, sliced tomatoes and vegan sriracha mayo made with aquafaba (the canned chickpea water).

Make the compartments work for you

And here’s how Paden City used this foil tray in a very creative way: walking taco components=fun for the kids.

Gwinnett County Public Schools turned some favorite Mexican menu items like nachos into a few different grab-and-go-friendly items: the “taco Joe” (taco meat in a sloppy joe) and the chicken tortilla soup and chips, pictured here. “This soup is thick and perfect for scooping up with tortilla chips,” says Rachel Petraglia, one of FM’s Chefs to Watch.

When 3.14 (March 14) rolled around this year, the Metz Culinary Management team at Crestwood (Pa.) School District was ready with pizza as the entrée and a free slice of pie (or mini pie) for dessert.

A great springtime dish served over penne pasta, chicken Florentine has been a take-home favorite, according to the Metz team at Pennsville (N.J.) School District. 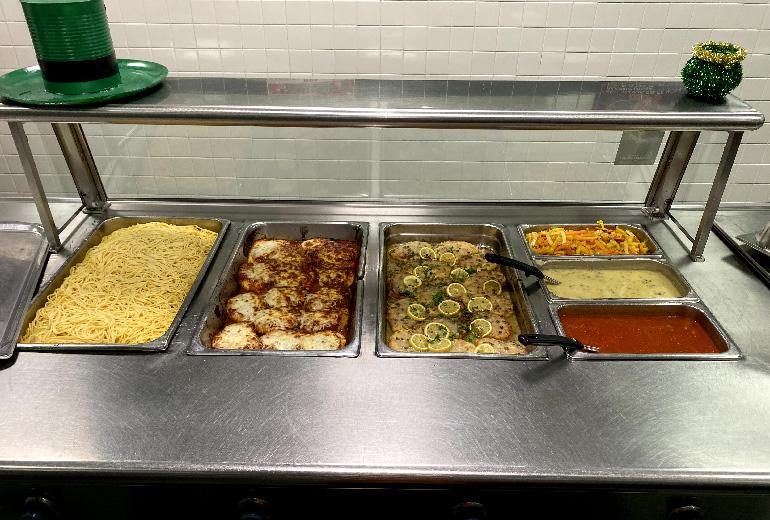