New York’s SchoolFood program, a division of the New York City Department of Education that operates meal services for the district, was rocked last September by the dismissal of its director, Eric Goldstein, for whom no permanent replacement has yet been named. The department provides all meals at no charge to NYC students.

A recent teacher strike threatened to disrupt meal service for thousands of Los Angeles students who depend on school meals, but the district stressed that it would continue to provide three daily meals to those who show up. About 80 percent of district students qualify for receiving free or reduced-price meals under USDA regs.

Earlier this month, Chicago Public Schools announced an expansion of its Eat What You Grow program to 130 sites. The program fosters school gardens that in turn supply produce to the meal program. The district offers free breakfast, lunch, afterschool snacks, afterschool supper and Saturday meals to all students during the school year and also serves breakfast and lunch to students during the summer months.

Miami-Dade unveiled a host of nutritious new menu items for the 2018-19 school year last fall, ranging from French toast, antibiotic-free chicken tenders and turkey bacon to vegan choices like vegan chili and cilantro-lime rice. The district also operates its own food truck, which travels to different sites to offer a change-up to the regular cafeteria dining fare.

Last fall, Clark County implemented the Nutrislice online portal that allows parents to view menus, get nutritional information and monitor their child’s meal spending and choices. The Clark County foodservice operates from its from its 300,000-square-foot central kitchen and warehouse complex in order to provide efficient production and distribution of its meal service.

Broward has begun monthly fruit and vegetable tastings at elementary schools to expose students to a variety of fruits and vegetables. It is also successfully garnering student feedback on potential food items at its annual student food show by using a rating system on iPads, impacting which items will be featured in next year’s menu. Other recent initiatives include implementing new digital menu boards in high schools to showcase breakfast and lunch offerings and upgrading school kitchens with freezer renovations.

Hillsborough County has been leveraging its new Center for Nutrition and Culinary Services, opened two years ago, to improve its meal programs. The consolidated facility includes not just centralized production operations but also training facilities, a catering department and even a retail café open to the public.

The 100-percent CEP Houston ISD offers a daily salad bar as an entrée choice at 157 of its elementary school sites, and all middle schools and high schools have salad bars as a lunch option. In addition, 170 district schools serve at-risk afterschool supper.

The district is also committed to establishing a Department of Food Literacy and Food Inclusion to teach children to think critically about food and the role it plays in their learning and health.  The department provides nutrition education programs and experiential learning opportunities such as school gardens and hand on agricultural projects.

For a Q&A with Director Betti Wiggins, go here.

Palm Beach County School Food Service continues to build its afterschool meal program, increasing meal counts by 204,000 and revenues by $800,000 in 2017-18 over the previous year. Meanwhile, the breakfast program continues to grow thanks to a Dairy Council grant for the second year in a row that allowed the purchase of 10 meal carts with POS registers, adding nearly 85,000 breakfast meals served to the schools where they were deployed. The district also continues its program to re-engineer the menus and dining infrastructure at its school sites, with two more high schools slated for cafeteria re-engineering in the 2018-19 and 2019-20 school years, respectively. Meanwhile, four elementary and middle schools completed phase 1 of their revitalizations, which includes new serving equipment, and four others completed phase 2, involving the addition of digital signage boards and upgrading the serving and seating environments.

Orange County Schools rolled out a new menu last fall featuring Korean barbecue, antibiotic-free chicken and fresh veggies and fruits from Florida farms, all served with compostable plates and silverware. One of its high schools also debuted a new greenhouse on school grounds that is providing very fresh and very local produce for the meal program being served in a renovated cafeteria.

Fairfax County Food & Nutrition Services (FNS) is teaming up with school communities and the Real Food for Kids organization to place salad bars in all of its 141 elementary schools. By the end of this school year, 84 will have them, with an additional 31 opening every year until all elementary schools in Fairfax County have access to these fresh and local offerings. Meanwhile, breakfast in the classroom has expanded to 38 elementary schools in the district and FNS is now approved to participate in the USDA At-Risk Afterschool Meals (Super Snack) Program, with more than 30 of its schools currently participating. Finally, FNS has developed relationships with local growers in Virginia and the wider mid-Atlantic region to create a true farm-to-school program with the federal Fresh Fruit & Vegetable grant program.

This year the Hawaii DOE launched its Harvest of the Month program in which it features a locally raised or produced item, and it has also begun creating a menu that is 60 percent scratch cooked. Also, Hawaii prides itself has being one of the few school districts in the country that has full-time bakers in its schools, where they make all of the breads, rolls and other baked items from scratch.

Gwinnett’s school nutrition department has built a strong network of community partners (including Amazon, Atlanta Community Food Bank, Children’s Health Care of Atlanta, Southeastern United Dairy Industry Association, Gwinnett Parks and Recreation and Gwinnett Clean and Beautiful) over the past few years, providing its program with marketing support, grant opportunities and access to programs for the local schools. Its partnership with nearby Fulton County Schools is in third year, yielding continued volume savings on aligned bid items. Also, this school year it launched a logo extension of its brand to include school faculty and staff with new, exclusive Adult Bar items such as premium coffee, flavored creamers, various protein offerings and specialty recipes.

MCPS requires and procures products without artificial trans fats or colors/dyes, and without chemical additives like acesulfame potassium, aspartame, BHA, azodicarbonamide, potassium bromide, propyl gallate or MSG. The poultry products it procures for serving in schools are CRAU (Certified Responsible Antibiotic Use) per USDA. This year it is also providing an allergen free hamburger.

Wake County just transitioned from poly trays to fiber and is in the process of implementing other initiatives to reduce packaging. The district’s participation in the North Carolina Farm to School Program gives its students the opportunity to enjoy locally grown produce such as strawberries, watermelons, cantaloupes, apples, grapes, peaches, tomatoes, sweet potatoes, cabbage, broccoli and blueberries throughout the year.

Dallas ISD has started a series of kitchen renovations aimed at bringing state-of-the-art kitchen facilities into its schools, which will allow it to serve the freshest, healthiest meals possible. In addition, several new breakfast initiatives are increasing participation and ensuring equitable access by all students while a “break meals” program ensures that meals and academic enrichment programs are available at more than 30 schools during vacation (Thanksgiving, Christmas/winter and spring break) times.

Charlotte-Mecklenburg Schools is currently piloting an online preorder system that allows high school students to order lunch in advance. The customized meals are prepared and the students pick them up at the beginning of their lunch period.

Philly Schools is expanding access to breakfast by offering alternative service models such as breakfast in the classroom, grab and go and breakfast after the bell in addition to cafeteria service in schools. Currently, 80 percent of district schools offer an alternative breakfast service model. Other recent initiatives include an ongoing kitchen equipment replacement program involving areas such as serving lines, refrigeration, ovens, warmers and steamers.

As it is situated near Washington, DC, Prince George County was particularly affected by the recent federal government shutdown. In response, the district launched The 10,000 Meals Challenge fund to support students who needed a hot meal both during the shutdown and beyond by allowing community members to assist in covering student meal fees. The new fund aimed to cover the cost of 10,000 meals, with donations distributed to schools with the greatest demonstrated need.

In the past year, San Diego Unified Food & Nutrition implemented build-your-own sandwich, ramen, nacho, burger and macaroni and cheese bar concepts. Another recent initiative is half-day in-house culinary boot camps, developed and led by the district culinary specialist and a team of supervisors, cooks and site leaders, that cover topics like knife skills, thermometer calibration, food safety, recipe development, portion control and food presentation. The district’s Love Food Not Waste food recovery program has been implemented at all district schools and the focus is now on removing as much plastic and excess packaging as possible from operations.

The Cy-Fair Nutrition Services uses its Power Up Café program to both improve the quality of all current menu items and to develop new ones to meet the changing and expanding palates of the diverse student body. Its newest endeavor is a pilot hydroponic greenhouse built to initially grow romaine lettuce to be served to students.

BCPS operates breakfast and lunch programs during the school year as well as afterschool snack and supper programs tied to enrichment activities. Its summer feeding program operates at both school sites and in local libraries.

Duval County Public Schools Nutrition Program offers menus that emphasize the use of minimally processed ingredients, including single-source, clean label products and it is committed to working closely with local farmers to buy and serve local fruits and vegetables to students. More than 60 percent of the produce the program uses is grown within the state of Florida, for example, and in this school year alone, local farmers are harvesting more than 100,000 pounds of fresh produce for Duval Schools. In addition, it works with local city farms to grow unique herbs and vegetables such as okra, Japanese eggplant, dinosaur kale and cilantro for use in students’ meals. Through the Get to Know the Grower program, local farmers are brought into classrooms to educate students while the Discovery Kitchen food sampling and cooking demonstration program brings district chefs to schools for a hands-on cooking demonstrations.

Shelby County Schools Nutrition provides over 65,000 afterschool meals and snacks over 800,000 summer meals in both school sites and through various community partners. 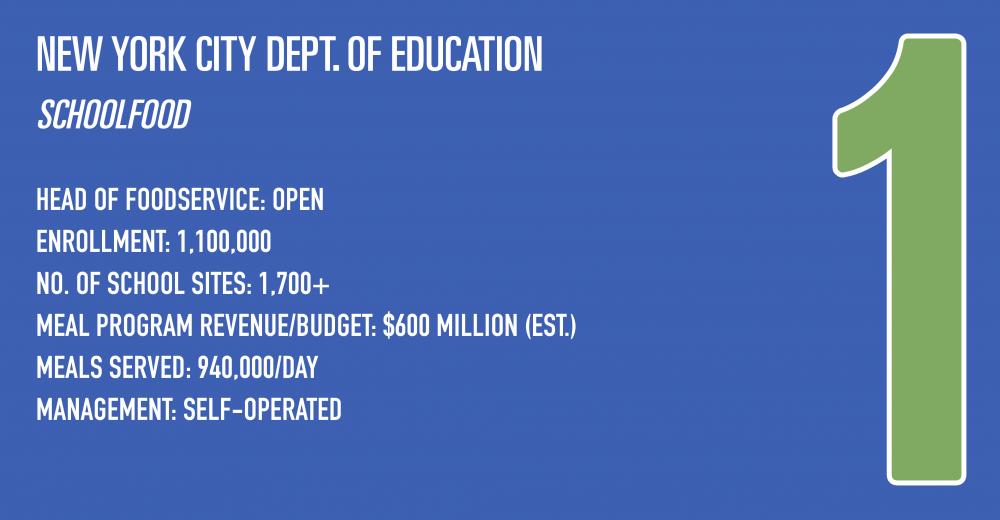