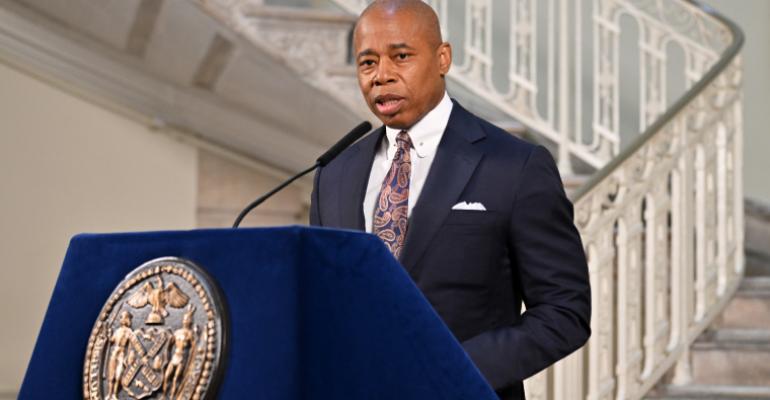 This and a comprehensive report that urges hospitals to embrace food as medicine initiatives are some of the stories you may have missed recently.

New York City Mayor Eric Adams has announced the release of the enhanced “New York City Food Standards, Meals/Snacks Purchased and Served” and the “New York City Food Standards, Beverage Vending Machines” guidelines that will affect the millions of meals and snacks served annually across 11 city agencies—including the Dept. of Education—starting July 1, 2023. The standards will require the serving of food with less added sugars, lower sodium, fewer beef options and more opportunities to have a plant-based protein, and will remove sugary drinks from city vending machines.

A recently released comprehensive academic narrative review and report titled Food As Medicine: How Food and Diet Impact the Treatment of Disease and Disease Management argues as one of its conclusions that hospitals must be a model for advancing food as medicine and integrating dietary evidence for the prevention and treatment of disease into institutional practices and programs. It recommends that federal, state and local government agencies should provide financial incentives and guidance to public and private hospitals and healthcare settings that develop and maintain food as medicine programs, including medically tailored meals and produce prescriptions. "There must be a complete overhaul of the meals served at hospitals to ensure that hospital food is medically tailored to address individual patient health," the report states. "Hospitals should provide meals that are easy and simply duplicated by their patients which would allow them to prepare nutritionally sound meals in their own homes."

Read more: Food as Medicine Review and Report: How Food and Diet Impact the Treatment of Disease

A multicultural social justice organization called Youth Empowered in the Struggle (YES), along with other allied organizations, is pushing for improvements in the food served in the Milwaukee Public Schools (MPS). Currently, the district cooks lunches at a central kitchen, then sends them to individual schools where they are reheated, and the result is “under-cooked food and substandard quality,” according to Katherine Villanueva, a YES member and senior at the Milwaukee School of Languages. YES is demanding that MPS provide food cooked at the school by food service staff using locally sourced ingredients and in larger, more filling portions, plus a system to identify and respect personal, religious, cultural, medical or other diary needs, and more food options in the lunchroom.

Following its December 2020 announcement to relocate its corporate headquarters from San Jose to Houston, Hewlett Packard Enterprise Co. held a grand opening celebration for its new Houston area headquarters campus on April 4. The facilities include a coffee shop called Bayou Brew and a massive cafeteria area that can flex as a meeting space and represents the company's commitment to giving employees flexibility by providing not only a variety of hot food items but pre-packaged meal options, snacks and drinks, and a section of rotating kitchen staple food options that employees can pick up at work instead of at the grocery store on the way home. The cashless and cashier-less dining program also offers mobile ordering with temp-controlled locker pickup.

Pamela Fergus, a psychology professor at Metropolitan State University who organized an online fund-raiser in honor of Philando Castile, the Black motorist killed in 2016 by a police officer during a traffic stop, has agreed to repay $120,000 that she collected after being accused of failing to use the money for its intended purpose of paying off student lunch debts. The Minnesota attorney general’s office filed a lawsuit against Fergus in June after she donated only about $80,000 of the $200,000 that she had raised to Saint Paul Public Schools.