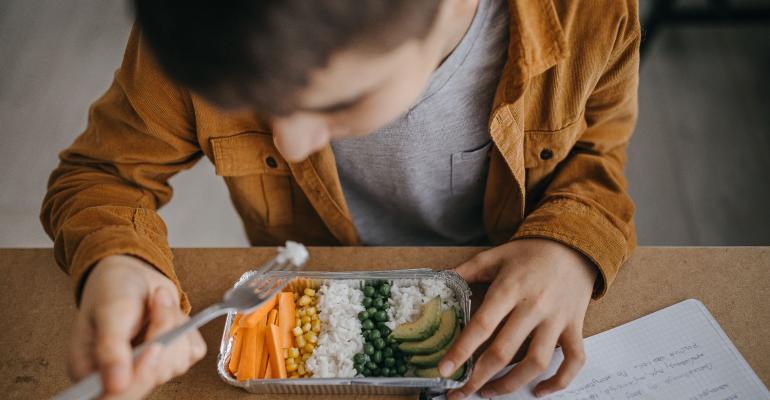 mixetto / iStock / Getty Images Plus
The new vegan regime builds on that by eliminating dairy-based items like mac and cheese, pizza and mozzarella sticks from the menu, though milk will still be offered as it is required to be served under federal USDA guidelines.
News & Trends>K-12 Schools

This and Compass reporting that organic 2022 Q1 revenues for its North American unit exceeded Q1 of 2019 are some of the stories you may have missed recently.

New York City public school cafeterias are going vegan-only on Fridays under a new policy from newly installed mayor Eric Adams, who had previously launched a vegetarian school food pilot program while he was Brooklyn borough president, a pilot that resulted in city school cafeterias already being completely “meatless” on Mondays and Fridays. The new vegan regime builds on that by eliminating dairy-based items like mac and cheese, pizza and mozzarella sticks from the menu, though milk will still be offered as it is required to be served under federal USDA guidelines.

"The quarterly improvement was largely driven by new business, continued strong client retention along with some ongoing recovery in the base business," the company reported, adding that "the emergence of the Omicron variant had a limited impact on the Group during the period."

According to insiders, the closure of Dropbox's San Francisco offices—including its famously posh Tuck Shop cafeteria—has made it harder for the company to retain employees, as one of its biggest draws had been the cafeteria where chefs from Michelin-starred restaurants served up gourmet dishes that were all free for employees. "It's emotional support for a lot of employees, in addition to access to good food," a former Dropbox employee who left in late 2020 said of the Tuck Shop's closure. "The removal, I think, had a psychological effect on people." Dropbox had announced back in October 2020 that it would turn all of its offices into flexible coworking spaces, to which employees are allowed to come and go as they please.

Read more: Dropbox insiders say the end of office perks like free food from Michelin-starred chefs and the shift to remote work has upended its culture and made it harder to keep employees around

Chartwells Higher Education has announced Delight-Ful, a nationwide event designed to celebrate, carry out, and encourage random acts of kindness that will take place on National Random Acts of Kindness Day on February 17, 2022. The third signature event from the company's Joy-Ful campaign, the Delight-Ful challenge will take place simultaneously across all 300 Chartwells campuses, encouraging Chartwells associates, students and staff to collectively perform 500,000 random acts of kindness nationwide. Examples include pay it forward cards for use in dining halls, surprise pop up coffee bars and student compliment blitzes. "We strive to give students the opportunity to help, surprise, and delight one another, both inside and outside of our dining halls, so we wanted to create an event centered around random acts of kindness," says Chartwells Higher Education CEO Lisa McEuen.

The WKU Restaurant Group at Western Kentucky University has announced that select campus restaurants will be switching to online ordering only for at least the duration of the spring semester. It says the decision was made to “improve the guest experience” as well as to increase the speed of service and reduce line wait times.