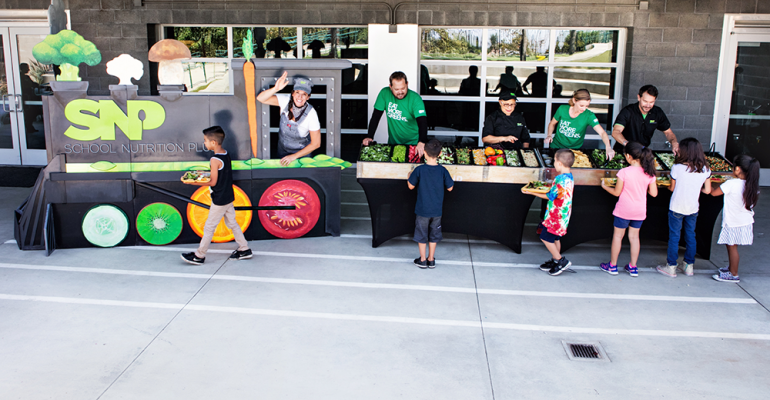 Photos: School Nutrition Plus
The Alphabet Produce Train is a mobile station fashioned to look like an old-fashioned steam train.
News & Trends>K-12 Schools

A replica of an old-fashioned steam engine highlights 26 types of produce and serves composed salads made with combinations of them.

Getting students to try new fruits and veggies can be a challenge, but the California-based K-12 dining services firm School Nutrition Plus (SNP) has met it head on with a program called the Alphabet Produce Train. The concept travels to schools SNP serves and highlights an alphabet’s worth—that is, 26—produce items from a six-foot replica of an old-fashioned steam engine.

The idea for the Alphabet Produce Train was born in 2012 when SNP Founder Emily Burson, RD, and Business Partner/Executive Chef Brandon Neumen set a goal to create a nutrition promotion event that would support their client schools’ mandatory wellness policies while also introducing students to new produce.

The train-themed salad bar concept started simply, with a banner and 26 kinds of fruits and veggies, displayed from A to Z on a table. Throughout the year, the SNP crew would bring the set to schools they served, introducing students to a variety of colorful and delicious new foods. From the beginning, the event was a hit with youngsters eager to try new foods, but after three years Burson and Neumen decided to take the Alphabet Produce Train to the next level by hiring a professional set designer to build an updated version.

This became the current replica steam engine for which SNP team members dress for the part—even including a conductor!

Providing educational worksheets to schools ahead of time to teach students about the menu, the train continues to highlight 26 types of produce, but rather than individual fruits and veggies, it now also features composed salads designed by SNP chefs. “Boarding the train,” students discover dishes like the BCD salad (featuring roasted Beets and Cauliflower with Daikon radish sprouts topped with a citrus vinaigrette) and the PQRT salad (a bright mix of Pomegranate seeds, Quinoa, golden Raisins and fresh Tarragon).

While designing the new version of the Alphabet Produce Train cost about $5,000 and food costs escalate on event days, the investment has greatly paid off in terms of getting students excited to try more fruits and vegetables. SNP has consistently counted more students coming through the line on Alphabet Produce Train days, exposing more kids to scratch-cooked meals, says Burson. Kids get various composed salads based on the ingredients featured on the “train.”

“Along with students giving the event an enthusiastic thumbs up, feedback from school staff has been overwhelmingly positive,” she notes. “Thanks to the help of parent volunteers, SNP ensures the entire school staff gets to eat on event days.”

SNP, based in Bell Gardens near Los Angeles, was launched in 2009 by Burson, a registered dietitian who had become frustrated with managing school kitchens where re-therming pre-packaged frozen items was the norm, and Neumen, a trained chef with experience in delivering maximum flavor using the best ingredients he can get his hands on. The company they founded specializes in utilizing fresh ingredients and limiting processed items while meeting USDA school meal guidelines. SNP currently serves more than 20,000 made-from-scratch school meals every day.