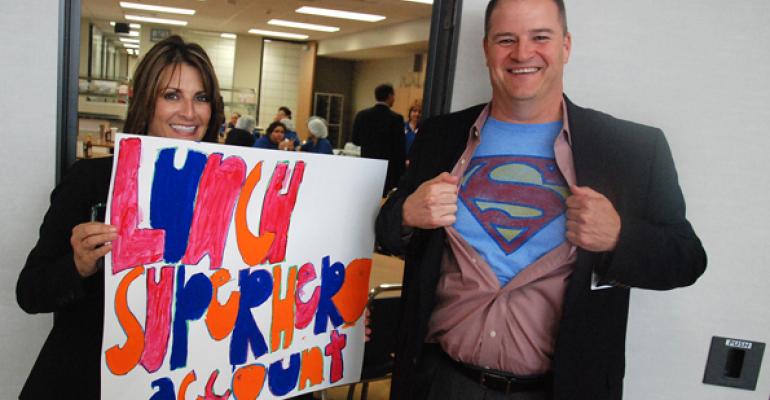 The Cypress-Fairbanks (TX) ISD is partnering with a couple of local social service organizations to replace its traditional alternative lunch program with a centralized, donation-funded resource for students who have exceeded the credit limit on their meal accounts. Three local organizations—Feed the Future Forward, Cy-Hope and the Cy-Fair School Food Service Association—unveiled the new CFISD Lunch Super Hero Account on April 17th at the district's Food Production Center.

Among the announcements was that Cy-Fair School Food Service Association, an organization for school nutrition employees, would provide the fund a $2,000 donation from president Diana Silva, doubling a $1,000 made by Feed the Future Forward founder Kenny Thompson.

Like many districts, CFISD has struggled with balancing the desire to feed children with fiscal responsibility when student lunch accounts fall behind. Previously, the 110,000-student district near Houston allowed individual principals to set their own policies, which ranged from allowing a child to continue to buy lunch the school would pay for out of its own funds, or keeping extra food with the school nurse or counselor.

Now, the Lunch Super Hero Account, which is completely funded by private donations, pays off charges on meal accounts that have exceeded the district’s limit if needed, taking the burden off the individual schools. Meanwhile, the foodservice office can work more efficiently with parents to deal with the issue.
“Often,” notes Darin Crawford, director of foodservices, “there was a disconnect between the extent of the problem and the resources to solve it as poorer schools with many kids behind on their accounts would struggle to deal with it, while other schools would have plenty of resources but very few students who needed the help.”

The idea of the Lunch Super Hero Fund started when Thompson noticed that some students in a school lunch line were having trouble because of being past the charge limit. He ended up paying $650 to settle the accounts for all students in that situation at that school. He then did the same thing in several other schools (not all of them in CFISD).

Crawford noticed what was happening and met with Thompson to discuss a more efficient system, which soon yielded the Lunch Super Hero idea.
Now, instead of going to individual sites or scouring through 85 school rosters for students behind in their accounts, Crawford has a master list of families he contacts to bring accounts back in the black.

“In many cases, it’s just a matter of reminding them to add money,” Crawford says. “Where it is a financial issue, we work with them. Some qualify for federal reimbursements, but hadn’t done the paperwork. In cases where it becomes a repetitive problem, we get the counselor and school involved.”

The Lunch Super Hero fund is used only when an account has exceeded the charge limit, which is lower for high schoolers. “The idea is not to absolve parents of responsibility for their children, but also to ensure that each child gets fed,” Crawford says. He adds that he understands the potential risk of encouraging nonpayment but is confident that a combination of persuasion and support can keep the problem manageable.

Meanwhile, the Lunch Super Hero account has given the community a new way to support a worthy cause—feeding kids. Businesses have held fundraisers and made donations, and even the foodservice department has pitched in with a pay-a-dollar-to-wear-jeans-to-work offer, with the money going to the fund.