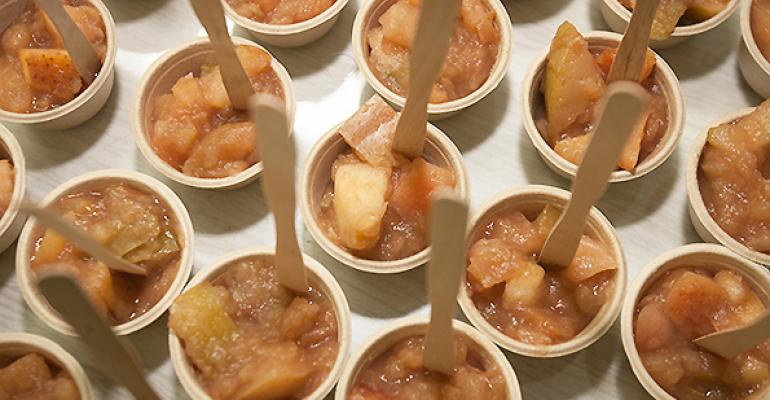 <p>Applesauce created during a WITS Lab for students to taste.</p>
News & Trends>K-12 Schools

Wellness in the Schools works with foodservice professionals in public schools to feed kids healthier food and teach them about nutrition and fitness.

What started with one parent in one classroom in one school has since become a school food revolution—centered in New York City.

In 2005, Nancy Easton was frustrated with the school food options being provided to students in her district, her children included. She decided to do something about it and banded together with a group of like-minded parents to change the paradigm.

Their goal was to inspire healthy eating, environmental awareness and fitness as a way of life for kids in public schools. And over the past 10 years, they have done just that through the nonprofit Wellness in the Schools (WITS).

“As Executive Director, [Easton] has helped WITS grow to over 75 schools in New York City, serving over 40,000 students,” says Reana Kovalcik, development and outreach manager. “We’re also crossing our t’s and dotting our i's on programs in two other states—New Jersey and Florida.”

WITS has three main components: Cook for Kids, Green for Kids and Coach for Kids.
Its goal is to inspire healthy eating, environmental awareness and fitness as a way of life. Cook for Kids is the foodservice-based aspect of the program.

In partnership with the local department of education, WITS’s Cook for Kids initiative operates in public school cafeterias and classrooms. It is made up of three main programs: WITS Café, WITS Lab and WITS BITS.

WITS Café
The WITS Café program is the cornerstone of the nonprofit and it operates within public school kitchens to support the implementation of scratch cooking, healthier school lunch recipes and the expansion of salad bars.

“We strive to increase the use of scratch-cooked recipes; make a fresh salad bar and homemade dressings available daily; eliminate flavored and sugar-sweetened milks; provide fresh drinking water daily; offer fresh fruit and a vegetable at every lunch service; and use whole-grain pastas/breads and rice in school food recipes and products,” says Kovalcik, who has been with the nonprofit for four years.

These goals are accomplish through WITS’s train-the-trainer model.

In NYC, WITS chefs spend 25 to 30 hours a week inside the school for an entire year. They reteach the onsite staff how to order, cook and serve a scratch-based menu that has been approved by the department of education. In year two, they cut their onsite time down to two days a week, slowly weaning from the day-to-day immersion and eventually, in year three, acting more as support, coming in once a month.

What’s more, there is no cost to the school to participate in WITS Café. The nonprofit works with the existing budget and the same regulations the school adhered to previously.

“The only cost associated with the program is the WITS chefs who are paid through fundraising efforts and grants,” Kovalcik explains.

“These experiences help to engage students in the cafeteria, encouraging them to select healthy foods and try new menu items,” Kovalcik says. “Last year we did a kale day where students were able to sample kale smoothies, kale chips and a kale slaw. They loved it!”

WITS Labs are a series of cooking classes, during which children prepare and taste simple recipes focusing on a featured ingredient. Taught by a WITS chef, the WITS Labs introduce the importance of eating locally and seasonally, the fundamentals of cooking and the essentials of nutrition. The students then learn and complete a basic recipe using the ingredient. Recipes are given to children to take home and at least one of the recipes is prepared in the cafeteria during the WITS Lab week.

“WITS Labs are made possible thanks to the generosity of sponsors like Whole Foods Market and Gotham Greens,” Kovalcik says. “All the ingredients for our WITS Labs are donated by these partners.” 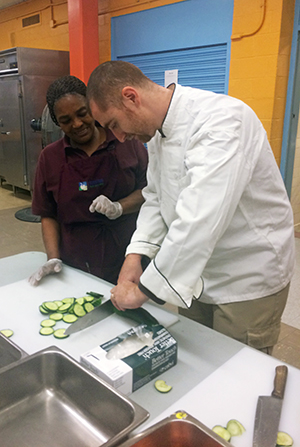 The Big Impact
“WITS brings gastronomical and wellness education inside our schools,” says Eric Goldstein, chief executive of The Office of School Support Services for the New York City Department of Education. “It’s been a perfect partnership between education and cuisine and also fitness. They’ve helped us in the kitchen with training and preparation of food. And with programs surrounding wellness, too. It’s really something special.”

According to Goldstein, WITS has had a ripple effect across the entire district.

“We’ve definitely been able to learn from the WITS chefs,” Goldstein says. “There has been a general rising of the tide in terms of the discussion and implementation of better food and more holistic wellness. I very much see it continuing to evolve—and that’s what I hope for as well.”

Goldstein views the success of the program by the impact is has on the student level.

“WITS can be life-changing for a student who isn’t exposed to these ingredients or this type of nutrition and wellness education,” he says. “In a longitudinal way, by exposing a student to nutritious and better quality food, we can have a lifelong impact.”

Kovalcik concurs, sharing an example she received from one of the WITS chefs.

"I recently got to sit down with my school food manager and have a heart to heart,” says Chef Luba [Peys] at Dos Puentes Elementary School. “She told me today that PB&J sandwich selection [one of the substitute meals NYC schools provide to students who do not wish to take the day's hot lunch] had dropped by over 40 kids each day. This means that the vast majority of the kids are eating the hot food! The manager told me she hopes our [WITS] alternative menu continues for years to come because she really sees the difference and the need. She wants me to continue doing as many tastings as possible because she sees the positive results and success. She told me both of the principals are very happy with the changes and they, too, see a difference in the kids' attitudes toward the menu. At the end of our conversation, she thanked me for helping out and making a difference in the kids' lives. I was so heartened to hear such beautiful words. I'm so happy that she shared with me today and made me feel wanted and useful.”