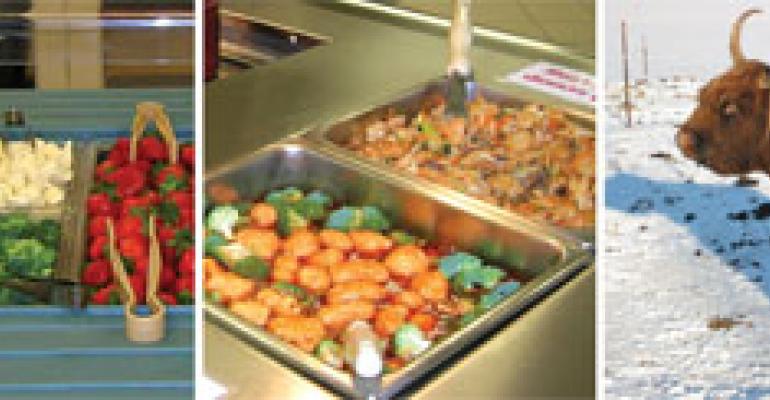 Traditional wisdom says that making kids “eat their vegetables” is not a recipe for increasing participation, but don't tell that to Diane Chapeta, who oversees dining programs at two small Wisconsin school districts: Chilton and Hilbert. Chapeta revived the moribund programs by bringing locally grown fruits and vegetables into the lunchroom on a daily basis and letting the students take as much as they want with their lunch. The gambit has been a major factor in boosting high school lunch participation by about 50 percent in Chilton and around 25 percent in Hilbert.

Chapeta also upgraded the menu at the districts, adding variety and kid-friendly — but healthful — alternatives offered in an appealing food court style, a radical departure from the staid single-line traditional servery in place before. She has also embarked on an ongoing program to substitute out processed items and ingredients from the menu in favor of local and fresh items, such as fresh potatoes instead of processed dehydrated product to make mashed potatoes.

“Before we made the changes, participation rates were low in both high schools,” Chapeta says. “The programs were antiquated with one hot line and the occasional a la carte selection. To change that, we put in theme bars and started buying local: first produce, then meats and now cheeses. Our goal is to be over 20 percent local sourced next year.”

The participation gains were dramatic. In Chilton, the daily count at the high school went from 120-150 a day to 300-320. Hilbert was a bit less dramatic, with a 23% increase in the middle/high school cafeteria. At the elementary level, with less room to grow, since participation was already high, Chilton saw about a six percent gain, and Hilbert 10 percent.

The highlight addition to the program was a full fruit/vegetable buffet in each cafeteria. The lines, completely self serve, are part of any meal students take, “so they can fill up as much or as little as they want,” Chapeta says. “We don't tell them how much they have to take.”

There are eight to 15 items on the bar each day, both fruits and vegetables. Some is fresh, but she won't hesitate to use frozen or canned at times of year when local fresh is unavailable, along with dry choices like soy nuts.

Students also have daily choices of different salads, from vegetable to pasta and potato. The staff developed the recipes and the choices vary daily.

The fruit/vegetable bar helps student meals qualify as reimbursable. “We don't have a problem counting components on our trays because the kids come up with very full trays,” says Chapeta. “They're feasting, basically. They're choosing for themselves and they're trying new things on their own.”

The nutrition staff helps that along by promoting new items and even new growers added to the supplier roster with big, bright signs. Some of the new items included beets, squash, and even kohlrabi, which Chapeta says the kids “actually ate it and loved!”

For prepared items, scratch prep is emphasized. “We don't open open cans or boxes any more,” Chapeta says. “We make our mashed potatoes from scratch and instead of French fries or boxed scalloped potatoes we now do oven roasted or baked — even twice-baked.”

Chapeta says buying local produce in season is more than competitive in terms of price with what is available in traditional channels. And, to her delight, she found that even the other kinds of products can be purchased advantageously locally.

“I was worried about prices for local meat but we found our beef producers were willing to sign a three-year agreement to lock in the price for that period,” she explains. “The first year the prices were higher than for commodity burgers. The second year they were even and this year they're cheaper.”

She says the producers are willing to work with the system because of the volume it represents. “In fact, one producer doubled his herd because of us,” she adds proudly. “And we're keeping the money in the community!”