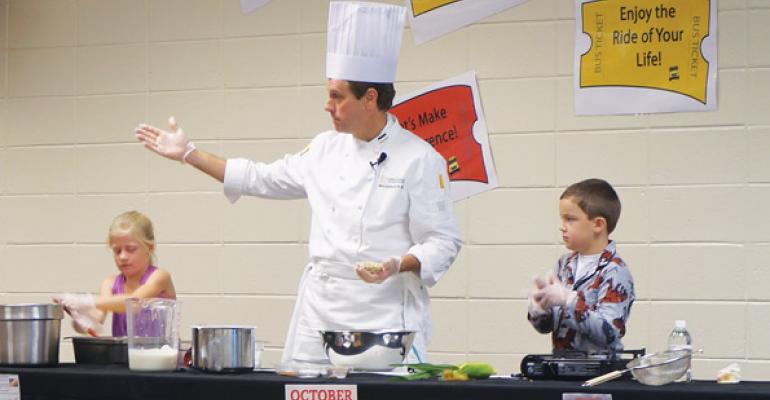 On the first day, Adam Brumberg, a researcher at Cornell University’s Food & Brand Lab, toured and watched lunch service at Tritt and Pope High Schools. He then addressed some of the district’s cafeteria managers on ways to improve presentation in the cafeterias to encourage the selection of more healthy choices. This session was also videotaped so that managers not able to attend could access it.

“His suggestions included things like how to better place signage on the serving line, how to do a better job of branding and marketing and even where to move garbage cans,” says Jennifer Toon, MS, RD, LD, area nutrition & wellness supervisor.

The next day, Chef Mark Ainsworth of the CIA’s Hyde Park campus put on a cooking demo in from of a group of first and second graders that included the preparation of an apple crisp incorporating whole grains and locally grown apples, as well as a demonstration of how to make ricotta cheese.
There was also a corn shucking contest (complete with staff member dressed like a corn cobb, followed by the serving of locally grown corn in the cafeteria. The idea, Toon says, was to make the connection for the youngsters between the corn they had fun shucking and the corn served as part of the subsequent meal.

The events were held in sites with lower participation rates and included presentations to parents about the quality and healthfulness of school meals. It also drew some local media, giving the program positive attention.

The appearances of Brumberg and Ainsworth were sponsored by Schwan’s Food Service. Cobb County district representatives had originally met the two at the “Getting Back to Your Roots” symposium held this past spring at the CIA’s San Antonio campus by Schwan’s for a group of school foodservice directors.