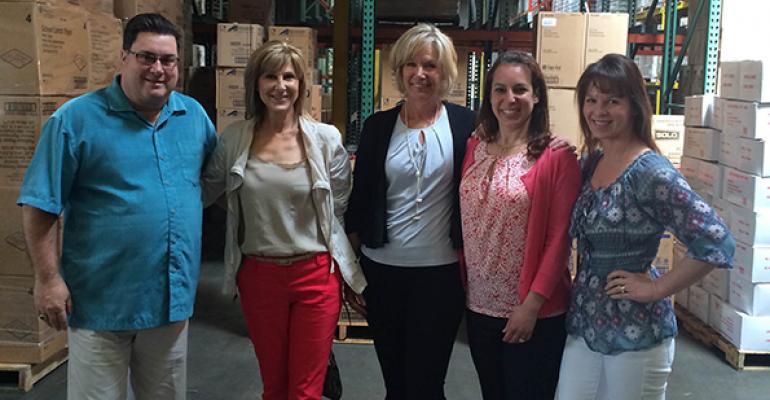 One California National School Lunch Program commodity co-op switched to a single bank system and cut its unused entitlement money in half.

When it comes to students and their lunches, food waste has been in the news a lot lately. But there’s another waste area that’s an issue with some school meal programs—wasted money. One new California program, however, is taking a bigger picture view, aiming to reduce millions of dollars of funding waste on a statewide level.

Districts on the National School Lunch Program (NSLP) receive reimbursements for every qualifying meal they serve. Part of that reimbursement is in the form of agricultural commodities for items like beef, chicken and cheese, which is then used in student meals.

Vital to making the NSLP work are food manufacturers. They turn those raw products into something closer to being ready to serve, such as raw ground beef into seasoned, precooked taco meat.

In theory, the system seems straightforward. In practice, however—as many school foodservice directors admit—there is potential for costly inefficiencies. For example, a school district sends commodity food to a manufacturer, but maybe that end product isn’t incorporated into the menu.

Often times in school commodity foodservice, supply exceeds demand, which drives down prices. The result, to borrow an old expression, is “you can’t give it away.”  Manufacturers are stuck with millions of dollars of unused inventory and food is wasted. Moreover, school districts risk cutbacks to entitlements that fund the NSLP, as the government questions why it is paying for food that never makes it onto lunch trays.

“For whatever reason, if those items aren’t being used by one district, that’s billions of dollars of unused food,” says Stephanie Ewing, vice president of Gold Star Foods, a major food distributor to school meal programs.

Formerly Ed Jones Food Service, Gold Star Foods North is more than a middleman in the NSLP. It also manages Schools Linked in Commodities (SLIC), a cooperative, and one of the largest commodity purchasing groups in California with 100 school districts.

Students are not the only ones in California schools who wrestle with math problems. The SLIC co-op as a whole received $11 million of entitlement money in fiscal year 2012-2013, and about $4 million of unused inventory carried over into the next fiscal year, representing approximately 45 percent of NSLP commodity provided to SLIC participants.

“Manufacturers don’t want to be sitting on that inventory,” Ewing says. “And then, to tell Congress that we need more money? Congress is going to start slashing [funding]. There was a definite problem, so how do we come up with a solution?”

She found the answer a year ago, when the co-op moved to a single bank system, called a Simplified Commodity Inventory Program (SCIP), which addresses some problems, namely, unused food and wasted entitlement money. As director of food distribution for the State of California at the time, Ewing arrived at the heart of the solution with an initiative she named “sweeps.”

Sweeps resulted in SCIP being transformed into a more viable program for the co-op. Now, a website developed by Gold Star Foods tracks the flow of product in terms of dollars rather than pounds and is critical to its effective administration.

“We basically took 7.5 million pounds of food and put that back out for the schools to purchase,” Ewing says. “We figured out a way to start everyone from scratch. We told the districts: Use it or lose it. You have from now until the end of the next school year, and then it’ll be put into the state excess account.”

“With the single bank system, now it’s not ‘my balance’ and ‘your balance’ for each district in the co-op. Now, anyone can use it,” Braverman says.

The system works, however, individual school district buy-in is another challenge, she adds. It requires a change in their perception, regarding their control and ownership of NSLP entitlement.

She encourages co-op participants to “look at the bigger picture and all the opportunities you’ll have to spend your money down. In reality it just opens up the opportunity for everyone in the co-op to use an array of processors. If I don’t have eggs at the manufacturer that makes the omelets I want, I can still get the omelets as long as our co-op has eggs there.”

“This [SCIP] is such a huge deal because now representatives from the manufacturers can offer all the products to every district in the co-op, whether or not each district has a balance there,” says Kevin Lyons, vice president, Gold Star Foods North. “So if you see a new product, you don’t have to wait to order it.”

The fear for some districts had been that the product they wanted wouldn’t be available under this shared system, but “the fact is, it’s more seamless,” Braverman says. “We just have to make sure our co-op has beef, for example. So if you want to change the processor, you don’t have to wait for the next ordering cycle.”

One of the benefits of a co-op is increased purchasing power.

“The co-op allows school districts to act independently, but act as if they are larger than they are,” Ewing says.

She explains that in addition to its main role of distributing food, Gold Star helps with the administration of co-ops to “help school districts work more efficiently and effectively.”

Tracking purchases in “virtual warehouses” had been another drawback before.

“In the past, each district kept track of how many pounds of food they had left and which manufacturer it was with,” Lyons says. “Where do you have your commodities? Here’s what you started with and here’s what you have left. We thought, ‘There’s got to be a better way.’”

The single bank system is working, according to the key players. And the numbers do as well—compared with more than $4.5 million of unused entitlement money carryover in Fiscal Year 2012-2013 (about 45 percent) the following year, Fiscal Year 2013-2014, the carryover had been cut almost in half to $2.5 million.