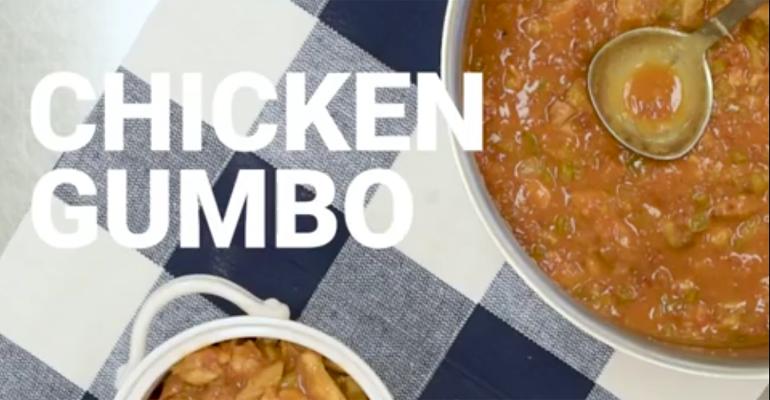 What better way to instill confidence in the quality of the food you serve than to imitate how popular culinarians reach consumers?

It looks like a typical cooking show video clip, dramatizing the assembly of a particular dish complete with easy-to-follow instructions. But it’s actually a clip made and promoted by the Denver Public Schools (DPS) Food & Nutrition Services department, and the goal is not just to convey information on how to create a particular healthy and tasty dish but also to leave the impression that the DPS school meal program is a culinarily savvy operation.

K-12 foodservice has long battled the pervasive stereotype of school meals being a poor cousin of restaurant meals that are mass produced with low-quality ingredients and scant attention to flavor or appeal. School nutrition professionals have been making slow but steady headway against this notion with greater attention to scratch prep, recipe sophistication and appealing presentation.

“We started off with Facebook—we have our own Facebook page—but we found is that neither our parents nor our students were necessarily going to that, but the parents and students do go to the main DPS Facebook page,” explains Theresa Pena, regional coordinator of outreach and engagement for DPS Food & Nutrition Services. “So we started posting what we called Menu Monday postings that might highlight a particular employee, for example.”

That immediately resonated, she notes.

“We know from focus groups that what parents want to know who’s making the food, how do you make it and what regulations are you following. So really just a lot of interest in ‘what are you feeding my kids and who’s doing it?’”

That led to Menu Monday postings highlighting particular new menu items being served in the district, such as the 16 new entrees—many of them vegetarian—that debuted in DPS lunchrooms for the 2017-2018 school year, along with the employee profiles.

“That then expanded into [exploring] what are some other things could we do that would be of interest to our families,” Pena says. “Well, those of us who use Facebook had seen these tasting videos, which are just 30-second clips of a great recipe, and so we thought, ‘Why don’t we do that?’ because we’ve had a scratch cooking initiative here for going on eight years, and while parents generally know about it, they don’t really know that it is exactly how they’re doing cooking in their own homes.”

The recipe prep video clips, boasting the hashtag #DPSDelicious, debuted in January with one illustrating the scratch prep of the district’s chicken gumbo dish. A new one will be added each month going forward as the gumbo clip has been a big hit.

“That has received probably the greatest amount of feedback and hits to the website and we’ve just reposted it on other department platforms,” Pena notes. She says the clip had received some 3,000 views in the first few weeks of its posting just on the DPS homepage, which doesn’t include the views of the reposts on the food/nutrition services department Facebook page and on at least two other individual department pages.

“We wanted to provide a greater level of transparency and education about the meals that we’re serving kids,” says Theresa Hafner, executive director for enterprise management at DPS, “so we’re doing this hands-on demo that is truly no different than we would do it in our kitchen. The other thing we’re trying to change is just the perception of school meals, to show how much time and effort we’re actually putting into creating our scratch-cooked items.”