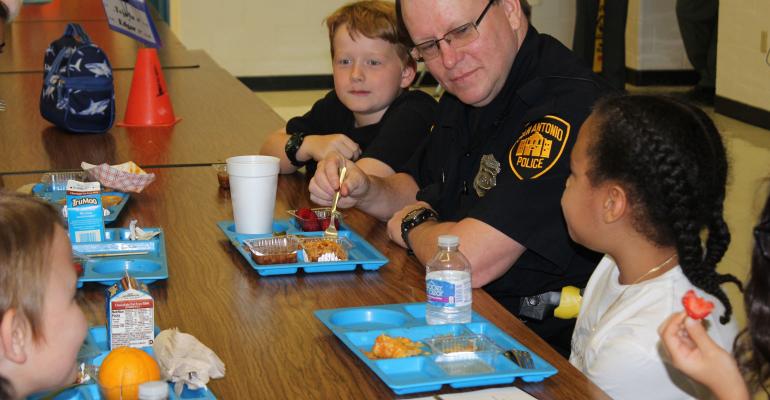 North East ISD has opened its elementary school cafeterias to police officers to come in and enjoy a complimentary meal while interacting with students.

They say nothing bonds people together better than sharing a meal. That seems to be the strategy being followed by North East ISD in San Antonio, which this fall opened its 47 elementary school cafeterias to uniformed police officers to come in and share lunch on the house with the kids. In the early going, 57 meals have been served under the initiative.

“It’s not something that’s utilized daily at every campus,” admits Sharon Glosson, executive director of school nutrition for the district. “It is used more frequently at some campuses than others.”

The program was promoted with a flyer, with the district’s own security department communicating with various area law enforcement agencies to get it posted at substations.

The value of the program extends beyond just kids getting familiar and comfortable with police officers, Glosson adds,

“In my view, it’s also marketing. If the kids are seeing a police officer as a role model and they see that this officer is eating a school meal, then they may be more likely to try the school meals as well.”

The police are required to be in uniform when they show up and check in at the front desk as a visitor. Wearing the uniform has another benefit, as the sight of a uniformed police officer on the premises has a deterrent effect as an additional security measure.

Also, while the sight of uniformed security is common at district middle and high schools, they are less visible at the elementaries, so “the elementary school kids weren’t interacting with officers on a regular basis in the schools,” Glosson explains. “The chief of our school security force wanted to start these positive interactions at an early age with law enforcement,” something the free meal program now facilitates.

The security chief isn’t the only one happy with the program—so are the other adults in the elementary schools.

“We’ve received a lot of positive feedback from school staff and the principals, who have been very enthusiastic about it because it does give their students a positive message,” Glosson reports, “and the students really enjoy having what to them is a celebrity eating with them in their cafeteria.”